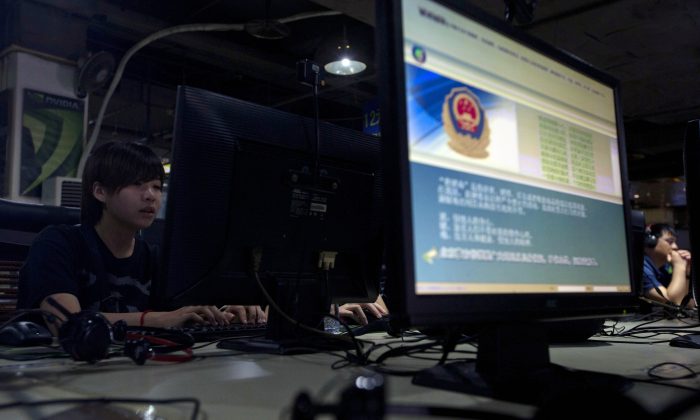 Acomputer displays message from the Chinese Great Firewall on the proper use of the Internet at an Internet cafe in Beijing. New web publishing news announced last week will bar foreign companies from publishing most forms of online content. (AP Photo/Ng Han Guan, File)
China

In the evening of Aug. 4, a news host and reporter at New Tang Dynasty, a Chinese-language television station in New York, punched in search terms for terms related to Falun Gong, a Chinese spiritual practice that has been persecution in China since 1999. The terms included “Falun Dafa,” another name for the practice, and words related to forced organ harvesting, the gruesome yet profitable activity that researchers believe has led to the mass killing of many adherents.

The host, Simone Gao, found that while Chinese-language searches gave only the expected propaganda response to these human rights issues, she had no trouble finding uncensored results in English, she wrote in response to questions on Facebook.

But after NTD posted screenshots of Gao’s Baidu search results to Facebook, the censors evidently toggled their settings back—the next morning, the same searches resulted in the display of no pages whatsoever.

When the blocks were lifted, and why, is not clear.

It’s not the first time that Chinese censors appear to have been derelict in their duty — though, given the facility of permanently blocking such terms, an accident seems improbable. The persecution of Falun Gong and associated abuses, of which organ harvesting is the most prominent and brutal, is mostly the work of an unofficial leadership cabal centered around Jiang Zemin—the retired Party leader who began the persecution of Falun Gong.

In March 2012 when rising Chinese politician Bo Xilai was implicated in a high-level conspiracy and apprehended, a similar censorship leak took place. That time, Falun Gong-related search terms were unblocked at various times in quick, sometimes overlapping succession for a few hours each.

Bo Xilai was a key figure in the persecution of Falun Gong and it is widely thought that Jiang and his allies were grooming him for eventual leadership of China. Instead, Bo was given a life sentence in 2013, the year that Xi Jinping, a Party official unaffiliated with Jiang’s clique, rose to power and began a broad purge of the regime, its institutions, and state industries.