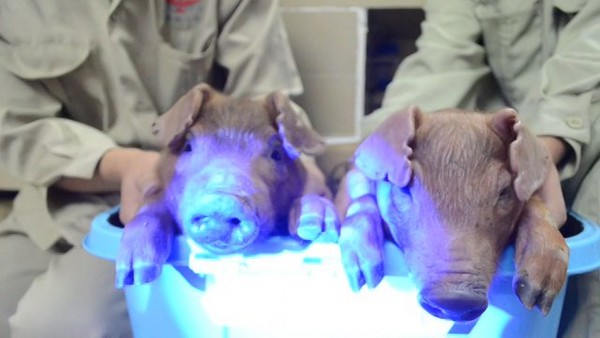 Two transgenic pigs that glow in the dark being held under ultra-violet light by researchers in Guangdong Province. (South China Agricultural University)
China

Ten genetically altered piglets were bred in southern China this year, and all of them emit a greenish glow in ultraviolet light.

Using a method pioneered by Hawaiian researchers, two scientists at the South China Agricultural University in Guangdong injected a fluorescent protein from jellyfish DNA into pig embryos. Their research will be published in the journal Biology of Reproduction.

“It’s just a marker to show that we can take a gene that was not originally present in the animal and now exists in it,” said Stefan Moisyadi at the University of Hawaii in a press release.

The technique will eventually allow genes to be transferred into larger animals for developing more effective drugs at lower cost.

“[For] patients who suffer from hemophilia and they need the blood-clotting enzymes in their blood, we can make those enzymes a lot cheaper in animals, rather than a factory that will cost millions of dollars to build,” Moisyadi added.

Chinese netizens commented widely about the news with many saying that the green piglets looked cute, or making jokes about glow-in-the-dark meat.

A Weibo blogger pointed out that this type of research has been done before on other animals. “I don’t care if it was pigs or rabbits, these scientists are not just mad, they are frenzied. This kind of genetic experiment doesn’t have much value in research, and has been done many times. Making fluorescent animals is just showing off to get public attention …”

Some Internet users on Yahoo News thought that the experiment was cruel. One said: “Mankind is horrible …”

Another remarked: “This is abominable! Do those scientists want to fluoresce? Is it necessary to do that (and say it’s cute)?”