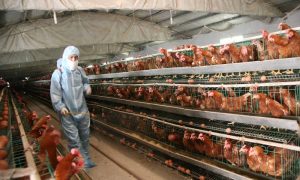 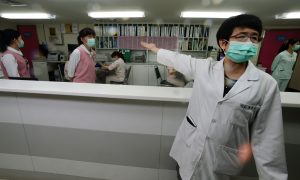 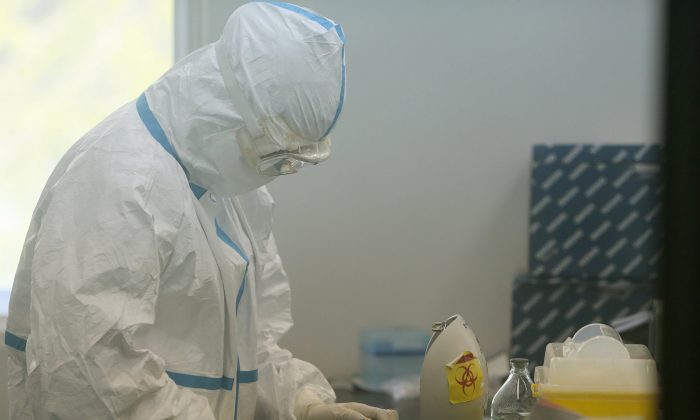 A doctor working in the lab at the Beijing Center of Disease Control on April 16, 2013, during the H7N9 bird flu outbreak. Chinese researchers have published a paper about a mutant virus they created from the H5N1 bird flu and H1N1 swine flu viruses that can infect guinea pigs. (STR/AFP/Getty Images)
China

Chinese researchers have created a virus that can infect mammals via coughing and sneezing by hybridizing the H5N1 bird flu virus with the H1N1 swine flu strain that caused the 2009 pandemic.

Their paper was published in the journal Science on May 2, the same day a man from Henan Province died from the H7N9 bird flu virus–reportedly the first death outside of eastern China and the 27th death among over 120 cases to date.

The H7N9 virus is believed to be a reassortment of several avian flu viruses, but is relatively benign in birds, according to recent research by another Chinese team published in the New England Journal of Medicine.

H5N1 bird flu is highly pathenogenic, but does not easily infect people, whereas H1N1 swine flu infected many millions in 2009. As yet, there is no evidence that the two viruses have mixed in nature, but they do overlap geographically and share some host species.

In the controversial new research the Chinese scientists deliberately manipulated the two viruses to make them more dangerous, for what they said was for the purpose of improving their understanding of pandemic risks. Some of the resultant mutants easily spread through the air between guinea pigs in the lab.

“If these mammalian-transmissible H5N1 viruses are generated in nature, a pandemic will be highly likely,” said research leader Hualan Chen at the Harbin Veterinary Research Institute of the Chinese Academy of Sciences.

“High attention should be paid during routine influenza surveillance to monitor such high-risk H5N1 hybrid viruses in nature.”

While Chen believes her work could benefit disease control and prevention, other scientists are critical of these so-called gain-of-function mutation studies, as manipulating viruses requires excellent lab security standards to prevent the viruses spreading or being accessed by terrorists.

Microbiologist Richard Ebright at Rutgers University, New Jersey, said two other studies had already looked at how H5N1 mutations spread through the air between mammalian hosts–in that case ferrets. That flu research triggered a debate about biosecurity, and led to a one-year moratorium on any similar projects.

“This argument—even if one accepts it, which I do not—does not provide a rationale for the third, fourth, fifth, and nth research projects confirming the same point,” Ebright told Science Magazine via email.

Baron May of Oxford, a former U.K. government chief scientist, told The Independent that the work by Chen’s team is “appallingly irresponsible.”

“They claim they are doing this to help develop vaccines and such like. In fact the real reason is that they are driven by blind ambition with no common sense whatsoever,” he added.

Further research by Chen and colleagues has apparently been delayed by investigations into the new H7N9 virus.