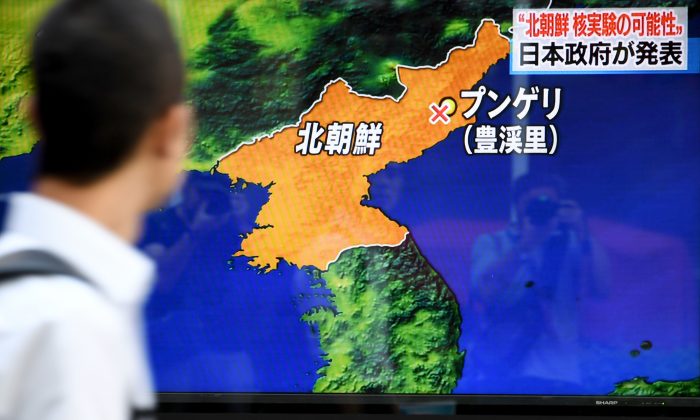 Scientists in China have confirmed that the site of North Korea’s nuclear testing has collapsed, supporting what experts have suspected back in September 2017 when North Korea conducted its largest underground nuclear test.

The news raises the possibility of radioactive leakage and exposure in neighboring northeastern regions of China, where millions live near the border to North Korea.

It also comes as the North Korean regime recently announced that it would suspend testing and shut down the test site at Punggye-ri, raising the question of whether the regime decided to do so after the test site became unusable.

On April 23, a research team led by geophysicist Wen Lianxing, at the University of Science and Technology of China, published its findings on the university’s website. They analyzed historic seismic data and determined that the testing site North Korea has used since 2009, the Mantap Mountain within Punggye-ri, had collapsed after continued bomb tests rendered it unstable.

On Sept. 3, North Korea tested its sixth and most powerful bomb yet, triggering a 6.3-magnitude earthquake that occurred after the bomb went off.

Then, on Sept. 23 and Oct. 12, there occurred several seismic events. At the time, experts, including at the US-Korea Institute at Johns Hopkins University, warned that the Sept. 3 test may have caused substantial damage to the site, but could not confirm the nature of the seismic activities.

Wen and his researchers determined that the Sept. 3 bomb triggered a central cavity located 440 meters (about 1443 feet) northwest of the explosion to collapse, setting off the successive earthquakes.

“We need to continue monitoring the possibility of radioactive material leakage as a result of the collapse,” according to the researchers’ announcement.

The scientists told South China Morning Post in a April 25 interview that the Sept. 3 bomb had vaporized surrounding rocks and opened up a space up to 200 meters (about 656 feet) in diameter. Radioactive dust could escape through such cracks in the mountain.

A paper published in the academic journal, “Geophysical Research Letters,” last month, also came to that conclusion. “The explosion created a cavity and a damaged ‘chimney’ of rocks above it,” according to the paper. That was the first time a rock collapse had been documented on the test site.

Wen and his researchers’ findings will be published in a forthcoming issue of “Geophysical Research Letters.”

The possibility of nuclear leakage was already a concern last year when experts worried that underground tunnels within the Punggye-ri site may have caved in.

Wei Shijie, an expert who has worked on China’s nuclear program, said at the time that a nuclear leak “was inevitable” regardless of whether there was a collapse, according to a Telegraph report.

The recent confirmation of Mantap Mountain’s partial collapse has only heightened that possibility.