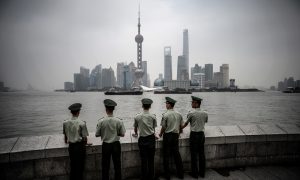 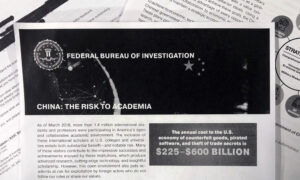 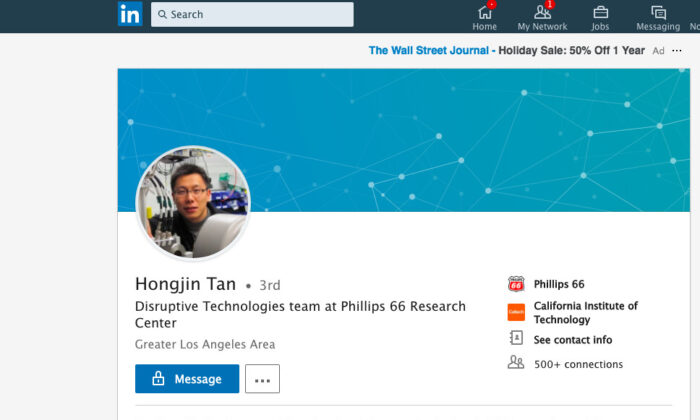 A Chinese scientist was sentenced to 24 months in federal prison for stealing more than $1 billion in trade secrets from his former employer, U.S. petroleum company Phillips 66, the Justice Department (DOJ) announced on Feb. 27.

Tan Hongjin, 36, a Chinese national and U.S. permanent resident, was arrested in December 2018 and pleaded guilty last November to charges relating to stealing trade secrets after admitting to downloading research materials from Phillips 66 without authorization. While the company wasn’t identified in the DOJ press release, it was named in court documents.

The stolen information related to the manufacturing of an unspecified energy product estimated to be worth roughly $1.4 billion to $1.8 billion, according to an affidavit filed by the Federal Bureau of Investigation (FBI).

Tan was an associate scientist for Phillips 66 in Bartlesville, Oklahoma, from June 2017 to December 2018. He was assigned to work with a team to develop next-generation battery technologies for lithium-based battery systems. Lithium batteries are widely used in electronic gadgets such as smartphones, laptops, and tablets.

The DOJ said Tan downloaded hundreds of files to a thumb drive on Dec. 11, 2018, and then submitted his resignation on the same day. The next day, he returned to the company, claiming that he had forgotten to hand over the thumb drive before leaving the company.

It was discovered that five files had been deleted from the thumb drive. A subsequent FBI probe showed that Tan had downloaded them onto his personal computer hard drive.

According to court documents, Tan told a co-worker at the company that he planned to return to China. Then, during the FBI investigation, the agency found on Tan’s laptop an employment agreement from a Chinese company that produces lithium-ion battery materials.

“Unscrupulous individuals like Hongjin Tan seek to steal American trade secrets to take home to China so they can replicate our technology,” U.S. Attorney Trent Shores for the Northern District of Oklahoma said in a press release.

The federal judge also ordered Tan to pay $150,000 in restitution and spend three years on probation following his release from prison.

Phillips 66 didn’t immediately respond to a request by The Epoch Times for comment.

This prosecution is among a growing list of cases targeting Chinese state-sponsored theft of U.S. trade secrets.

Earlier in February, a Texas man, Shi Shan, was sentenced to 16 months in prison after being convicted of stealing U.S. marine technology to benefit China.  The technology related to syntactic foam, which is a strong, lightweight material that has both commercial and military applications, such as deep-sea oil and gas drilling.

FBI Director Chris Wray has previously said the agency has about 1,000 investigations involving China’s attempted theft of U.S.-based technology, in all 56 field offices, covering almost every industry and sector.