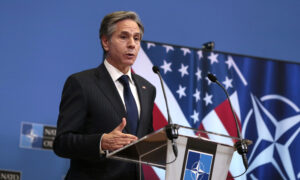 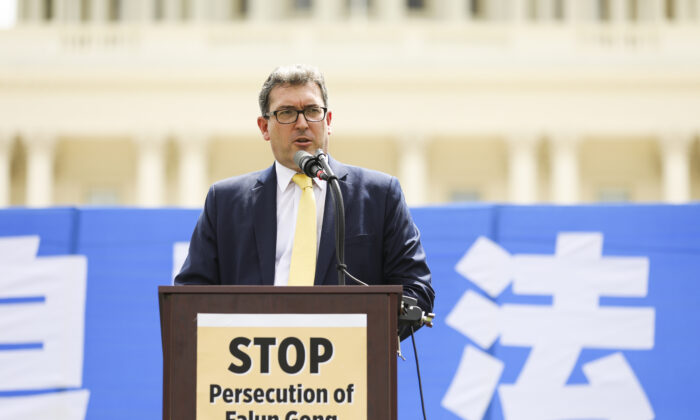 Benedict Rogers, a UK human rights activist, speaks at a rally commemorating the 20th anniversary of the persecution of Falun Gong in China, on the West lawn of Capitol Hill in Washington on July 18, 2019. (Samira Bouaou/The Epoch Times)
UK

The Chinese regime’s sanctions against Western individuals and entities who have been vocal about its human rights record should serve as a “wake-up call” for the democratic world, UK politicians and human rights advocates said on Friday.

China’s Foreign Ministry said it would sanction nine individuals and four entities on the UK side that “maliciously spread lies and disinformation” about the treatment of Uyghur Muslims in Xinjiang.

Benedict Rogers, deputy chair of the Conservative Party Human Rights Commission, one of the entities on the sanctions list, said, “Actually, it’s the Chinese Communist Party regime that spreads lies and misinformation.”

“I think the regime is reacting not because it has any credibility on its side, but because it doesn’t like the truth being exposed and a light being shone on the human rights situation. And so it’s lashing out in response to that,” he told The Epoch Times.

“I think that it should make people in the democratic world wake up to the fact that this is a regime that doesn’t behave in a normal, rational way. It doesn’t use the norms of diplomacy.”

He said the democratic world needs to work together to confront the Chinese Communist Party.

“This news should serve as a wake-up call that if we don’t stand up to this regime, our own freedom and democracy will come under increasing assault,” he said.

Among those sanctioned are five British MPs. Two of them, Conservative MPs Tom Tugendhat and Neil O’Brien, lead the China Research Group, which is one of the sanctioned UK entities.

In a statement, Tugendhat and O’Brien said, “This is the first time Beijing has targeted elected politicians in the UK with sanctions and shows they are increasingly pushing boundaries.”

“It is tempting to laugh off this measure as a diplomatic tantrum. But in reality it is profoundly sinister and just serves as a clear demonstration of many of the concerns we have been raising about the direction of China under Xi Jinping,” they said.

“As British legislators this will not actually affect us hugely, but the point of Beijing’s actions is to make others feel threatened, and to have a chilling effect on business people in particular.”

Rogers said the sanctions, which include a travel ban and asset freeze, do not have any impact on him because he does not have any property or assets in China and has already been denied entry to Hong Kong previously.

Rogers, who has been vocal against the Chinese regime’s abuse in both Xinjiang and Hong Kong, was denied entry when arriving in Hong Kong in October 2017.

“So in effect, this for me personally is simply a symbolic initiative. It’s really a badge of honour that I take as a recognition of my human rights work,” he said.

Nusrat Ghani, one of the Tory MPs on the sanctions list, expressed similar sentiments.

She said she “won’t be intimidated or silenced,” and neither should the British government.

“I will use my freedom to raise the plight of the Uyghur & I will take this sanction as badge of honour,” she wrote on Twitter.

Another sanctioned British parliamentarian, Labour peer Baroness Helena Kennedy, also said the sanction will have no impact on her work.

“I’m basing my criticism of what is happening in this part of China on evidence. And it’s my view that there are serious human rights abuses taking place,” she told NTD.

“We have a duty under the Genocide Convention to protect people from genocide. And you don’t wait until it’s over. You have to act while you think it might be taking place. And the evidence points towards the genocide being in progress.”

“I’ve built my life around protecting civil liberties” both in the UK and globally, she said. “This won’t make any difference to the work that I do.”

In a statement emailed to The Epoch Times, Nice said, “The sanctions imposed by the PRC [People’s Republic of China] will not affect the work of The Tribunal and will not be held against the PRC by The Tribunal in reaching an independent judgment on the information provided to The Tribunal by any group, state, or individual that wishes to engage.

“We continue to hope that the PRC will respond to our invitations to cooperate with The Tribunal and provide evidence to help The Tribunal in its work.”

Newcastle University academic Jo Smith Finley was also sanctioned by Beijing for her research on human rights violations against Uyghurs and other Turkic Muslims in Xinjiang.

In a statement emailed to The Epoch Times she said she had “no regrets for speaking out” and would “not be silenced.”

“That the Chinese authorities should resort to imposing sanctions on UK politicians, legal chambers, and a sole academic is disappointing, depressing and wholly counter-productive,” she said.

“Since 2014, I have watched in horror the policy changes that led to an atmosphere of intimidation and terror across China’s peripheries, affecting first Tibet and Xinjiang, and now also Hong Kong and Inner Mongolia. In Xinjiang, the situation has reached crisis point, with many scholars, activists, and legal observers concluding that we are seeing the perpetration of crimes against humanity and the beginnings of a slow genocide.

“In such a context, I would lack academic and moral integrity were I not to share the audio-visual, observational, and interview data I have obtained over the past three decades.”

Reporting by Jane Werrell of NTD and Lily Zhou.

This article has been updated with comment from Jo Smith Finley.