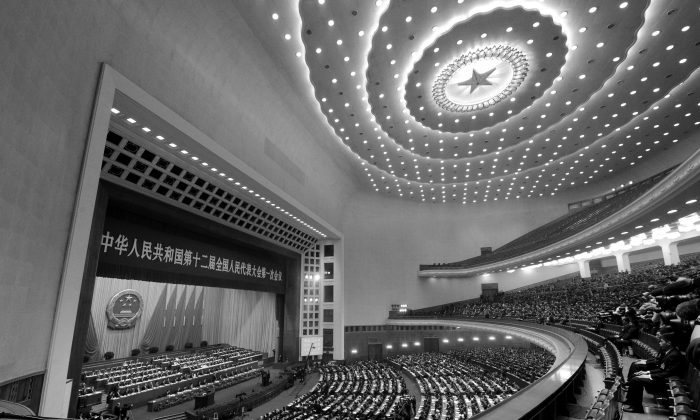 This picture shows a general view of the closing session of the National People's Congress (NPC) at the Great Hall of the People in Beijing on March 17. Members of the NPC enjoy a wide range of benefits not offered to the general public. (Wang Zhao/AFP/Getty Images)
China

Joining China’s rubber stamp legislature, the National People’s Congress, garners large corporate benefits and a range of other social and financial privileges not afforded to the general population, according to a new study by a Yale doctoral student.

Over 500 of the National People’s Congress (NPC)’s almost 3,000 members are corporate executives, and 83 are billionaires, suggesting an intimate relationship between wealth and political power in China. A decade ago, former Party chief Jiang Zemin opened the door for entrepreneurs and businessmen to join the Chinese Communist Party (CCP), which helped solidify these ties while co-opting the corporate set, to ensure they would be a force that helped, rather than hindered, one-party rule.

A seat in the National People’s Congress (NPC) gives CEOs a two percent boost in revenue and a seven percent gain in each year’s profit margin, the doctoral study found. It was written and conducted by Rory Truex, a doctoral candidate at Yale, and published by the Research Center for Chinese Politics and Business at Indiana University.

The study found that NPC members get additional earnings from the “reputation boost” of the position, but they have very little say in real policymaking; for example, the legislature has never rejected a law.

To measure the benefits of NPC membership, the study compared regular publicly listed companies with those whose executives had NPC standing and examined the difference in earnings.

Beyond financial gains, NPC members also thrive off the special treatment bestowed them.

Banks are more willing to lend to NPC members than private companies with no regime ties. The banks “will refuse you or they will check on you all the time” if dealing with a private company, said one individual interviewed by Truex.

Executives with NPC membership are also often shielded from accusations of corruption and “unfavorable regulations,” said the anonymous interviewee. An NPC member may have the prerogative to override the shutdown of a factory for pollution, for example. The interviewee told Truex that if factory owners, or their patrons, had no political backing, the authorities “will just shut it down.” Such cases of Party-affiliations overriding the rule of law incentivize businesspeople in China to actively enhance their ties to officials, or strive toward positions like NPC membership, where they can be better protected.

The net worth of the 70 richest delegates in the NPC is $90 billion while the average yearly wage of a Chinese urban worker is $7,000, according to a report by Hurun, a company that tracks wealth in China, cited by the Washington Post. According to Cheng Li, director of China research at the Brookings Institute, the public resents how “wealth and power continue to converge in China.”