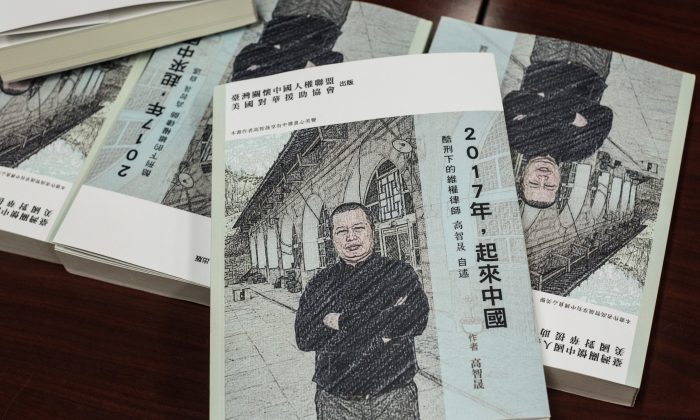 Copies of a book by renowned Chinese human rights lawyer Gao Zhisheng on display during a press conference at the Legislative Council Complex in Hong Kong on June 14, 2016. (Anthony Wallace/AFP/Getty Images)
China

Gao Zhisheng, a high-profile Chinese human rights lawyer who spent many years in jail for his work, has recently been held incommunicado in China.

In an interview with Epoch Times on Nov. 15, Geng He, Gao’s wife, said that police officers from Beijing had “hurried to remote Shaanxi,” a northwestern province over 600 miles from the Chinese capital where Gao lives, to rip up a copy of his new book that Gao’s friends overseas had mailed to him.

“Chinese agents have once again severed contact between me and Gao Zhisheng,” said Geng, who currently lives in California with their two children. “The supervision and harassment of our relatives in Shaanxi have also increased.”

Gao was once lauded by the Chinese Ministry of Justice as one of China’s top ten lawyers. Gao, a strong Christian, ran afoul of the communist regime when he started providing legal aid to practitioners of Falun Gong, one of the largest spiritual communities being persecuted in China.

Chinese security forces stepped up their surveillance over Gao after he penned open letters to the top Chinese leadership condemning the persecution, and he was formally arrested in 2006. Gao spent the next eight years in and out of prison, where he was on the receiving end of torture methods that were used on Falun Gong practitioners—including sleep deprivation, brutal beatings, and shocks with electric batons.

In 2014, Gao was placed under a form of house arrest in his native Shaanxi Province. In an interview with the Associated Press the following year, Gao recounted the torture he was subjected to, and said that he wasn’t allowed to visit a dentist to have his loose teeth fixed or visit a local town to take a hot shower.

While under house arrest, Gao Zhisheng secretly composed and smuggled out a 500,000-word manuscript titled “Year 2017, Stand Up China.” The book details Gao’s experiences as a prisoner from 2009 to 2014, and carries Gao’s prediction that the Communist Party will meet its demise in 2017. The book was published in Chinese this June, and an English version is forthcoming.

“This book has completely exposed the Communist Party’s pretensions,” said Gao’s wife Geng He. “All the tortures and anti-humanity treatment, as well as the anti-human rights brutality perpetrated upon Gao Zhisheng’s person by police officers, public security, the prisons, and army, are recorded here and penned with blood and tears.”

Geng has since made a digital copy of the Chinese language version available for download. (Link here.)

“What is the Communist Party afraid of?” she said. “Are they afraid of a book? Fine, I’ll make it a free publication, and everyone can download it as they please.”