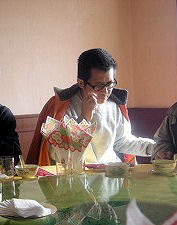 Before the indictment, Guo had been detained for a long time despite insufficient evidence to support a criminal charge. Guo's defense lawyer, Hu Xiao, revealed that in protest against physical abuse and torture by the police during interrogation, Guo went on a hunger strike for a total of 40 days during his detention. China Human Rights Lawyers Concern Group in Hong Kong urged Beijing to stop the local governments' illegal acts.

According to Human Rights in China (HRIC), a human rights organization in New York, the Tianhe District Procuratorate in Guangzhou formally indicted Guo Feixiong for “conducting illegal business activity” in connection with compiling a book published in 2001 regarding a political scandal in Shenyang City, Liaoning Province.

In 2005, Guo Feixiong provided legal help to villagers in the Tashi Village, Guangdong Province. He brought charges against suspected officials for corruption and exposed the incident to the public via the Internet. He was thus arrested but released due to a hunger strike. Afterwards, he was tailed and kept under house arrest by the authorities until he was arrested again in September 2006.

The Guangzhou PSB referred the case to Guangzhou's Tianhe District Procuratorate twice, but the case was sent back both times for supplemental investigation because the procuratorate did not find sufficient evidence to support a criminal charge. During detention, Guo was once transferred to Shenyang Detention in Liaoning Province. Currently he is in Guangzhou's Tianhe District Procuratorate. According to his defense lawyer, Hu Xiao, the procuratorate and the judiciary have asked Guo to plead guilty, but he refused.

“To our knowledge, he (Guo) said he did not admit guilt and did not sign any document during the interrogation. That is, he did not confess to anything.” Hu Xiao said.

HRIC reported that the PSB officials from both Guangzhou City and Shenyang City have visited Guo's wife Zhang Qing. They offered to let her visit Guo at the detention center on the condition that she persuaded him to confess and admit guilt, but Zhang refused.

According to Guo's lawyer, Guo told him that since being formally detained last September, he has been subjected to severe physical abuse and round-the-clock interrogation for several days by the police from the PSB in Guangzhou City. During the interrogation, the police handcuffed his hands and feet to the bed. He thus went on hunger strike for a total of 40 days in protest against the treatment.

Executive Secretary, Patrick Poon, of China Human Rights Lawyers Concern Group in Hong Kong said that some local governments in China have violated the law as evident in Guo's case.

“Guo's case has been investigated twice. Despite insufficient evidence to support a criminal charge, the authorities formally indicted Guo on May 15, the last day the indictment could be issued according to the law. The local government did not follow the rules set by the central government.” Poon said.