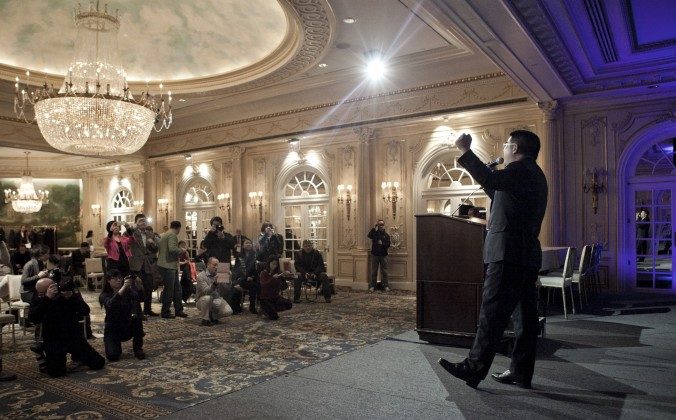 Chen Guangbiao speaks to the press at a news conference he called for the morning of Tuesday, Jan. 7, in a hotel in New York City. Chinese commenting on a Voice of America article about the press conference referred to Chen as "no. 1 hypocrite" and "no. 1 idiot."(Samira Bouaou/Epoch Times)
Opinion

The bizarre “bait-and-switch” press conference staged in New York this week by Chinese billionaire and self-proclaimed No. 1 philanthropist Chen Guangbiao drew some scathing comments from Chinese, who called him the “No. 1 hypocrite” and “the No. 1 idiot” in response to a Voice of America article.

Before coming to New York, Chen had announced he wanted to purchase the New York Times. But at the press conference on Jan. 7, after a solo karaoke act followed by Japan bashing, he introduced two badly disfigured burn victims, a mother and daughter, saying they were Falun Gong practitioners who had been part of the 2001 Tiananmen Square “self-immolation,” and he wanted to pay for the women’s plastic surgery in the United States.

The so-called “Falun Gong self-immolation” has been thoroughly debunked as having been staged, masterminded by former Party head Jiang Zemin and his closest faction members to demonize Falun Gong and to justify a crackdown on the peaceful spiritual practice. Scenes from the staged immolation were repeatedly broadcast by CCTV all over China, turning the Chinese public against the previously popular exercise and meditation discipline.

However, Jiang Zemin and his faction have suffered major losses during the past 2 years, and the persecution of Falun Gong is losing steam. Many Chinese have since learned the facts about the persecution and the self-immolation.

Voice of America published a Chinese article about Chen’s press conference on its website, titled “Mother and Daughter, Disfigured in Self-Immolation Incident, Come On Stage for Chen Guangbiao.”

It received a number of comments that saw the press conference as a propaganda trick in which Chen played a foolish role. Below are translations of eight comments.

1. The issue of Falun Gong is related to a life and death power struggle at the CCP’s top level, with the main reason being that Jiang [Zemin, former head of the CCP] caused a huge number of deaths and he has no way to resolve the mess. Now there is no one at the top level willing to continue the suppression.

Jiang chose Bo Xilai as his successor, but Wang Lijun aborted his plan. The extremely vicious Zhou Yongkang [former security czar] is almost finished, the fire may be extended to [former Politburo Standing Committee member] Zeng Qinghong and Jiang Zemin at any time.

Now this businessman comes out to support Jiang’s faction. He is simply too stupid and muddle-headed. Other people are hurriedly staying away from the matter, but he jumps in to play with fire! Who can bring out these two people [alleged self-immolators] if he does not have a significant political background? What good can it do you to get involved in this political struggle?

2. I would not call Chen Guangbiao the No. 1 Evil, but I definitely will call him the No. 1 Idiot. Getting into such a big mess that he previously had nothing to do with! Suffice it to say China’s rich are exceptionally stupid!

3. Chen finally revealed his true colors. Buying the New York Times is a fabrication, while propagandizing the self-immolation is his real agenda. This tactic can only deceive a three-year-old, it is very silly and despicable. Everyone knows the so-called “self-immolation” was staged. They are so naive, thinking that by sending the two people to have cosmetic surgery will make it all sound real.

This just shows that the CCP is running out of tricks. They have fostered Chen for so long, intending to make use of him as a reputable person someday. But as soon as he was used, he completely ruined himself.

4. His attempt to buy the New York Times is fake; framing up and slandering Falun Gong is the real purpose. Falun Gong friends, be sure to expose the CCP’s tricks! You are the hope of us Chinese!

5. If someone wanted to burn himself after he began practicing Falun Gong, the number of people committing “self-immolation” would at this point not just be two people. Tens of thousands of people would have already committed self-immolation.

6. There are many Falun Gong practitioners in foreign countries, but there has not been a single case of self-immolation [in other countries]. Only those with no brain would believe in this so-called “self-immolation.”

7. Chen Guangbiao is a spy dispatched by the CCP under the disguise of a businessman. He must have had a hidden agenda when he declared he wanted to purchase the New York Times. The mother and daughter who were burned, can they not receive treatment in China? Why must they be sent to the United States for treatment?

It’s obvious they came to the United States in order to further defame Falun Gong. We want to ask, who caused their disfigurement? What if they were disfigured during a forced-demolition and the CCP used the incident to frame up Falun Gong? If the mother and daughter were disfigured for some other reason, they would certainly cooperate since they are getting free treatment.

8. The name of one of the “self-immolators” is Chen Guo, and she used to be a college student. Her college classmate Wang Bo revealed yet another part of the staged self-immolation hoax: Self-immolator’ Chen Guo was Wang Bo’s classmate. Chen used to practice Falun Gong, but at the time when she knew Wang Bo in 1999, she had stopped practicing.

Wang Bo said in a statement in 2005, “I got to know Chen Guo during my studies at the Central Conservatory of Music. She [Chen Guo] used to practice Falun Gong, but when I knew her in 1999 she had stopped reading “Zhuan Falun” [the main text of Falun Gong] and did not regard Master Li Hongzhi [the founder of Falun Gong] as her teacher. She believed that a person surnamed Liu in Henan Province was truly a ‘very capable person.’ She also invited my mother and me to go with her to Henan [Province] to listen to that ‘very capable person.’”

According to VOA, the women replied, that their coming out in public has nothing to do with the Chinese government; it’s by their own choice, and those who say they do not practice Falun Gong are “distorting the facts.”

According to a Jan. 28, 2005 report on Minghui.org, a website run by Falun Gong practitioners to document the persecution, Chen Guo and her mother Hao Huijun, two of the alleged “self-immolators,” have been held under house arrest at the Beijiao Welfare Home in Kaifeng City. They have been watched around the clock to prevent any contact with the outside world.

The report said that since the self-immolation has widely been debunked, local police have privately revealed that authorities are trying to “take care of the two and not let them die, so they can be used to attack and discredit Falun Gong.”

Chen Guo, her mother, and other immolators who are being pushed to center stage by the CCP’s media are obviously victims, the Minghui report said. “We deeply sympathize with all of the self-immolation participants, regardless of their motives. The key point is: Who directed Chen Guo to commit self-immolation? Was it really Falun Gong, as the Xinhua News Agency claims? In the past 50 years, the Xinhua News Agency has habitually used the propaganda technique of twisting concepts to confuse people’s thinking.”

Translated by Olivia Li. Written in English by Gisela Sommer.