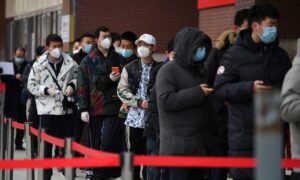 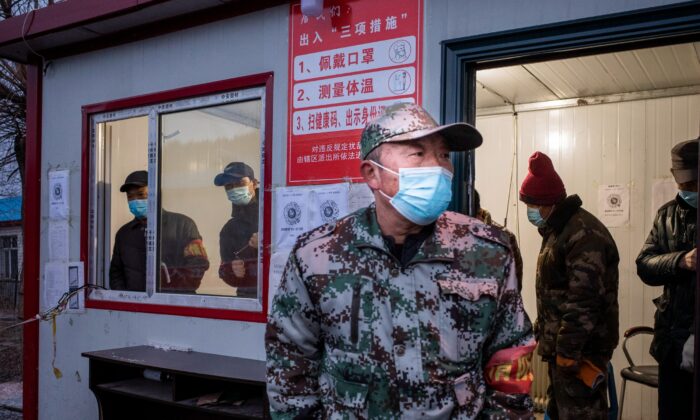 A staff member keeping watch at a checkpoint in the border city of Suifenhe, in China's northeastern Heilongjiang Province on April 21, 2020. (STR/AFP via Getty Images)
China Society

A pandemic control volunteer in northeastern China was stabbed to death on Feb. 3 while attempting to block a resident from leaving his apartment complex.

The volunteer, surnamed Zhang, worked as a guard at a residential community in Hulan district, Harbin city. He was stabbed multiple times after he refused to let a resident surnamed Chen leave the complex, as per lockdown rules, according to Hulan district police. Zhang was immediately rushed to a hospital, but was declared dead upon arrival.

The north-eastern province of Heilongjiang is one of the heaviest-hit regions in China’s latest CCP virus resurgence. In the capital of Harbin, many communities are currently under strict lockdown. Lockdown measures at the Kangle community in Hulan district, where the stabbing took place, are among the most restrictive: residents are ordered to stay inside their homes and are forbidden to take a stroll in their community courtyard.

The Epoch Times was able to reach several residents in the same community who revealed more details.

One resident explained that Chen wanted to go out to buy medicine, but Zhang blocked him at the community entrance. Chen then went back home and returned with a knife, stabbing Zhang several times. This resident also revealed that almost all residents in Hulan district have been ordered to stay at home. Households with COVID-19-positive family members had their front doors sealed with a paper strip to keep everyone inside.

Another resident who spoke to The Epoch Times said the community was placed under lockdown since Jan. 19, as it was deemed high-risk.

The man added that, in his opinion, it’s good for people, especially the elderly, to take a walk every day, and there shouldn’t be a problem taking a walk in the courtyard as long as people are able to maintain a safe distance. In addition, all residents had to take four COVID-19 nucleic acid tests.

The stabbing incident quickly became the most searched topic on Weibo, a Twitter-like social media platform. Many Chinese netizens left comments expressing their opinions about the stabbing and their frustrations with the lockdown measures.

“Local authorities are so much into lockdown, and some volunteers are rude and have no sympathy… I believe there will be more incidents like this,” one wrote.

Most volunteers hired to handle pandemic-related tasks are recruited by local authorities.

“I hope pandemic control staff pay attention to their work manners. Do not use insulting words or take offending actions. You are ignoring other people’s feelings under the banner of pandemic control! If you handle things more humanely, give people kind advice, such incidents can be avoided,” another wrote.

One netizen who was a store owner shared his experience with pandemic volunteers. “Several volunteers came to my store a few days ago. I had a lot of customers before they came in, but almost all my customers left when the volunteers arrived and yelled at them. Then they conducted all kinds of tests inside the store. They seemed to be around 20 years old. I think they are college freshmen or so. I’m not against these control measures, however, these volunteers act as if they are officials. These young guys act as if they have high-level authority. Before they left, they appeared very unhappy and yelled at the store employees. I believe there is a reason behind the stabbing incident.”

“The pandemic is driving everyone to insanity,” one netizen commented.

Another said: “I live in the Jinpu community in Dalian city. Our community had been under sealed-off management for nearly a month. On one occasion, when the volunteer didn’t allow me to go downstairs to take a walk, I too had the urge to kill him. But I was able to restrain myself in the end. Now, someone else has reached the limits of their endurance.”

Authorities did not give details about Mr. Chen’s current situation.