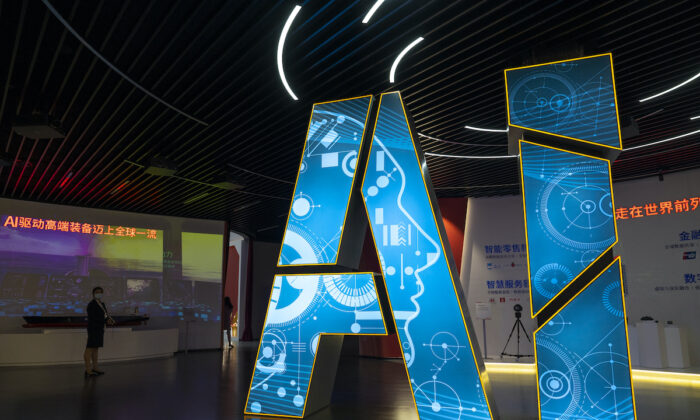 Cutting-edge applications of artificial intelligence are seen on display at the Artificial Intelligence Pavilion of Zhangjiang Future Park during a state-organized media tour in Shanghai, China, on June 18, 2021. (Andrea Verdelli/Getty Images)
Chinese Regime

Chinese researchers recently developed artificial intelligence technology that can gauge Chinese officials’ loyalty to the ruling Communist Party. The technology could be a tool for Beijing’s anti-corruption campaign to monitor further and purge “corrupt” Party members, indicating the regime’s growing fear of losing its legitimacy and power.

More than 4.7 million officials at all levels were investigated, subjected to various forms of disciplinary punishment, or prosecuted in the past 10 years, according to data released by China’s top watchdog, the Central Commission for Discipline Inspection (CCDI), on June 20.

“Political corruption is the biggest corruption. Some corrupt elements have formed interest groups in the hope of ‘stealing power from the party and the state,” according to state-run media Xinhua.

The Institute of Artificial Intelligence at Hefei Comprehensive National Science Center in eastern China’s Anhui Province published a post, claiming that it developed technology that could directly support the CCP. A “wonderful connection between AI and construction of the CCP,” it touted on its official WeChat account on July 1, the 101st anniversary of the founding of the CCP.

The post included a video showing a man walking into an equipment room labeled “Smart Political Thinking Bar,” then sitting in front of a computer with a touch screen to take a test. After completing the test, his test score and analysis chart appeared on the screen.

The video introduced a device that could use AI technology to extract the biometric features of CCP members, including facial expressions, electroencephalography, and dermatological features, among others.

After integrating and analyzing personal data, it would evaluate how a person was able to understand the content he/she studied, such as gauging the level of concentration, recognition, and mastery of the various subjects.

The device can “successfully integrate AI technology into the organizational life of CCP members,” said the researchers in the short film. The “organizational life” refers to behaviors the CCP imposes on its members, such as proving one’s loyalty to the Party.

The research team said it designed the AI device for “building up the CCP ahead of the 20th Communist Party Congress.” The Party’s most important political meeting is expected to be held at the end of this year, which will determine whether Xi can secure a third term.

At the time of writing, the WeChat post was taken down.

However, it had been widely shared on social media before it was removed, triggering public criticism of the use of AI to monitor ideological indoctrination, with some denouncing it as “technological brainwashing” and “digital authoritarianism.”

U.S.-based media China Digital Times obtained some of the post’s content and video and published a report earlier this month.

According to public information, the Chinese Academy of Sciences (CAS) and the Anhui provincial government established the Hefei tech institute. The institute is managed by the University of Science and Technology of China.

Speaking at a press briefing held by the CCP’s propaganda department on June 30, Wang Jianxin, director of the CCDI’s publicity department, said that in 10 years, from the Party’s 18th Congress to the end of April this year, around 4.3 million corruption probes were carried out and over 4.7 million officials received punishment.

Those CCP members were accused of various charges such as corruption, ties with criminal groups, abuse of power, and immoral lifestyle. An official report on the CCP’s image crisis, released in 2012 by Tang Jun, director of the Crisis Management Research Center of Renmin University of China, said that as many as 95 percent of corrupt officials investigated had a mistress, and more than 60 percent of corrupt cadres had a “second wife.”

Zhang Lei, a law professor at Beijing Normal University, told Xinhua on June 30 that there are four major problems among the CCP cadres: formalism, bureaucracy, hedonism, and extravagance.

Gao Wenqian, a scholar of CCP history, told VOA on Oct. 28, 2016, that the CCP’s institutional approach can only treat the symptoms of corruption but not the root cause, citing that one party’s monopoly of power is the root cause of corruption in the CCP officialdom.

“If you [the CCP] don’t fight corruption from the system, it’s like fighting flies around a manure pit. You’ll never get to the end; the more you fight, the more you get stuck. The result would be ‘flies are as big as tigers and tigers are as many as flies,’” Gao said.

The AI surveillance tech and anti-corruption campaign indicate that the CCP, fearing its downfall, will impose stricter controls on its members, especially high-level officials.

Official media Qiushi Magazine recently published a speech that Xi delivered at a seminar for provincial and ministerial-level officials on Jan. 11. Xi stressed the Party should strive to resolve the “impurity” of ideological thoughts, lifestyles, and organizations within the Party—anything that could undermine the CCP’s authority.

Last year, Xi warned CCP members about the consequences of stepping out of line. In a speech, he pointed out that some officials have morphed into “the spokesmen for various interest groups, power units, and privileged classes.” Xi stressed that no matter who has the problem, they should be “investigated and punished decisively and without mercy.”

Moreover, at a June 17 meeting of the CCP’s Politburo, Xi said that anti-corruption is a major political campaign that “cannot afford to fail.”