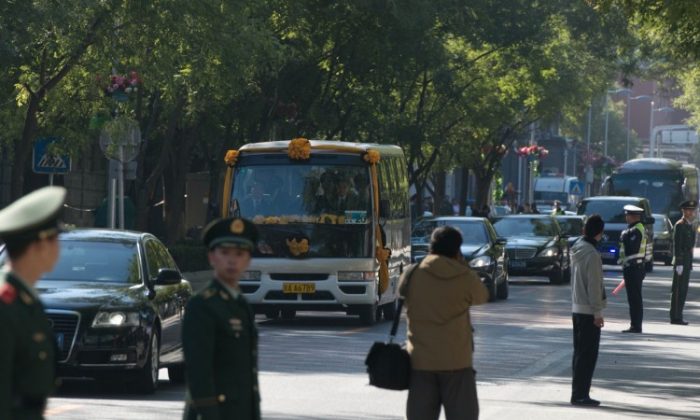 A middle-aged Norodom Sihanouk pictured with a bevy of young women. After his death, Chinese netizens complained of the Cambodian monarch's corruption. (Weibo.com)
China

Many Chinese netizens were outraged at the Communist Party’s display of honors for the deceased Cambodian ruler Norodom Sihanouk, who died on Oct. 16 in Beijing.

All the flags at the Xinhua Gate and all the flags in Tiananmen Square in Beijing were flying at half-mast, honoring the death of the former King of Cambodia, a long-time resident of China.

People’s Daily, the Chinese Communist Party’s mouthpiece, eulogized him. The regime mouthpiece Xinhua reported the following day that China and Cambodia had agreed to continue and advance their national friendship and strategic cooperation.

Chinese News Service noted an unprecedented honor guard escorted the casket with Sihanouk’s remains as it was carried to the airplane that would return his body to Cambodia.

Yet Chinese netizens were unimpressed by the state honors, and reacted with quick criticism of the regime’s tributes to the former ruler of Cambodia.

“After the death of Norodom Sihanouk, who collaborated with the Khmer Rouge to kill 300,000 Chinese in Cambodia, you predictably lowered the flags to half-mast, claiming his death was a great loss to the Chinese people,” netizen First Micro-Magazine commented to his 20,000 followers on Sina Weibo.

Citing the deaths of over 800 Chinese citizens in several tragic incidents during the past year, Wang Qiang, a Beijing financial professional, commented to his 43,000 followers that the regime “Didn’t lower the flags. Now, for an old Cambodian man who had been a free loader for several decades as a dependent of our tax payers, you lowered the flags at half-staff in no time.”

Another blogger remarked that a budget item was lost, and another asked if it wasn’t enough that he was fed for decades, calling him an old hooligan who cheated for free food and drink.

The Chinese regime treated Sihanouk, living in exile in Beijing after being deposed in 1970, to a lavish lifestyle. Sihanouk arrived during the Cultural Revolution, when Chinese citizens were living in poverty and often without adequate food, making the memory of his excesses even more bitter to netizens.

With his several wives and concubines, Sihanouk enjoyed such delicacies as a special soup one bowl of which required the death of 208 chickens, reported Caijing, a Chinese financial newspaper.

Xiao Jiansheng, editor of the state-run Hunan Daily newspaper, was quoted by Radio Free Asia, as saying, “Back in the 1970s, after the coup in Cambodia … Premier Zhou and Chairman Mao took pretty good care of him.”

However, one netizen framed the regime’s display of homage to the dead king in a global perspective, in which the good graces of Cambodia are of serious consequence.

“In the battle for Southeast Asia, Laos and Cambodia are more and more important to China, which is the core of the issue. China must therefore prove its good intentions. Sihanouk’s death is just a turning point,” pointed out Yin Hongwei, an expert on South-East Asia, in his Weibo blog.

With an eye to Cambodia’s offshore oil and gas reserves and the historical and cultural Cambodian Khmer claim to Cochin China, which includes the tip of the Indochinese peninsula holding the Mekong River delta, now within Vietnam’s borders, the Chinese regime has always been more than kind to Sihanouk.

“China should have more friends like Sihanouk,” said the Global Times, a state run mouthpiece. One netizen wryly commented, “He is such an old and good friend of the Chinese regime.”