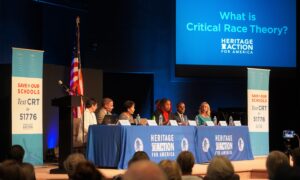 The logo of CGTN is displayed on a computer monitor in London, England, on Feb. 4, 2021. (Leon Neal/Getty Images)
Education

CGTN promoted critical race theory (CRT) in its four-minute video and encouraged parents to shape their children into racial activists.

The opening line of the video says, “Racism is passed down from generation to generation.” One scene of the cartoon shows a white child telling a black child, “You can’t be Spider-Man, you are black.” The video also instructs parents to use “examples from daily life and the news” to educate their children about being “anti-racist.” The video ends with the narrator telling the viewer that “being ‘not racist’ just keeps things the way they are now. By being ‘anti-racist,’ you can help lead our children to a brighter future.”

The entire video echoes the sentiments of radical leftist and CRT activist Ibram X. Kendi who theorized that racism is deeply rooted and institutionalized in all aspects of American society, and that “white supremacy” and racism is the main cause of socioeconomic disparities between blacks and Hispanics living in America compared to whites.

CGTN has been classified as one of six “foreign missions” in the United States, in an attempt to warn Americans that the content from the broadcaster is controlled by the CCP.

After this video was uploaded to YouTube about a year ago, it has received bitter criticism by viewers, with more viewers disliking than liking the video. After Mythinfomed posted the propaganda clip on its Twitter account on Aug. 16, it has received extensive attention.

In the Twitter comment section, a netizen by the name JimHansonDC wrote: “Helping Americans hate each other with lies, I guess that’s slightly better than unleashing a viral pandemic.” Another netizen pointed out that the CCP did not even do their research, as the person portraying Spider-Man in the latest Spider-Man movie, Miles Morales, is in fact black.

On July 10, the founder and chairman of the Asian American Coalition for Education, Zhao Yukong, wrote an article titled “Why should Asians oppose ‘Critical Race Theory’?”

“If you replace ‘White people’ with ‘landlord capitalists,’ ‘people of color’ with ‘proletariat,’ ‘racism’ with ‘class oppression,’ then you get that CRT is an airbrushed version of the class struggle theory that is now being promoted as a racial struggle theory. CRT tells us that racial oppression in America is everywhere and that ‘racism’ needs to be tackled ‘year after year, month to month, and day to day’ to achieve ‘racial equality,'” Zhao wrote.

Zhao quoted and mocked Chinese communist leader Mao Zedong in the article. Mao made a famous statement in 1962 during a CCP Central Committee plenary: “Class struggles must be carried out year after year, month to month, and day to day.”

Zhao pointed out that the “anti-racist struggles” that are in full swing across the United States today, which are fueling internal social conflicts under the guidance of CRT, such as the Black Lives Matter Movement, have also seen Asians become “fat sheep” under the butcher’s knife.

He gave the example of the cancellation of SAT scores in high schools with the intention of achieving “racial equity” in education outcomes, and the fact that Harvard, Yale, and other prestigious universities across the country now consider race and ethnicity an important factor in their college admissions process, which strongly advocates for CRT.

During the past six months, many parents—including Asian-Americans and African-Americans—have come together to stand up against the CRT curriculum being introduced to schools in at least 26 different states.

Christopher Rufo, a senior researcher at the Manhattan Institute, shared a video on Aug. 19 in which a black father gave a speech at a school board meeting saying that “putting Critical Race Theory into our classrooms is not combatting racism, it’s fanning the flames of what little embers are left.”

After hearing his opening lines, the audience gave the father a standing ovation. He continued saying: “I travel all across this country of ours… [and] I am treated with kindness, dignity, and respect literally from coast to coast. I have three children; they are not oppressed either, although they are victims. I have taught my children they are victims of three things: their own ignorance, their own laziness, and their own poor decision making.”

According to local media, after the speech made by this father and others, the school board voted 3-2 to ban CRT from the 49th District of Colorado Springs.