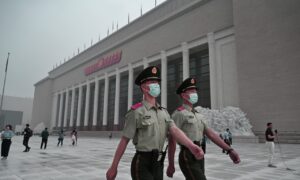 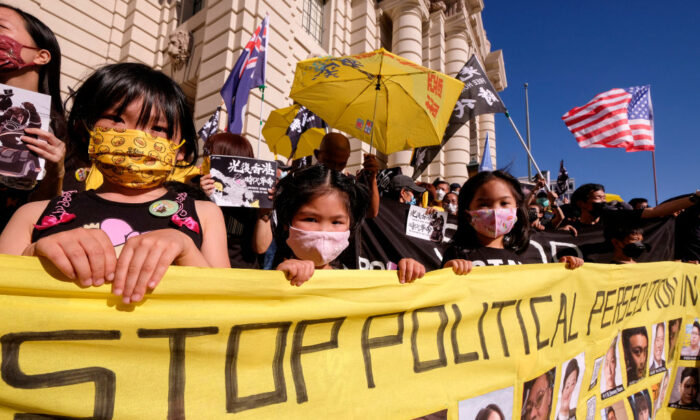 With July 1 marking the 100-year anniversary of the Chinese Communist Party (CCP), Southern California residents who escaped persecution by the regime have shared their experiences.

Jana Li, of Chino, California, said that her experience living under the CCP’s rule was “a nightmare.”

“[The CCP] treated me like an enemy and a target to kill, either physically or spiritually,” Li told The Epoch Times.

Li is one of the estimated 100 million Falun Gong practitioners who were practicing the peaceful meditation in China in the 1990s.

Falun Gong, also known as Falun Dafa, is a spiritual practice based on truthfulness, compassion, and tolerance. The practice gained widespread popularity in China prior to the start in 1999 of the persecution of its practitioners by the Chinese regime.

Li was arrested soon after the persecution began. She was held in three separate detention centers throughout China—located in Guangzhou, northeast China, and Beijing—as well as a women’s concentration camp in Beijing.

While in the concentration camp, two policewomen used electric batons on Li’s back and arms for hours, in an attempt to force her to renounce her faith.

“I could smell the scorched skin,” Li said. “As a result, I couldn’t lie on my back.”

Li was followed and monitored by another inmate 24 hours a day.

“While I was sleeping, eating, and even using the restroom,” she said of the inmate monitoring, “[they were] cursing me and insulting me all the time.”

Li said the policewomen deprived her of sleep for “extended months,” allowing her to sleep for only four hours per night. During this time, she was forced to stand against a wall from 6 a.m. to 2 a.m. as a form of torture.

She was also imprisoned in a “dark, small, isolated room” that was roughly 20 square feet.

Her sentencing lasted for more than a year.

Li immigrated to the United States in July 2004. She hasn’t seen her family or relatives in the 17 years since she left.

“The police and CCP officials harassed my family members, my parents, sister, and brother even after I escaped from China and [started] living here in the U.S.,” Li said.

“My sister was so scared and suffered insomnia for a long time. We haven’t talked to each other for years because she is so scared.”

Hong Kong’s pro-Beijing national security law, which cracks down on political dissenters of the CCP, has led to many people fleeing Hong Kong to escape political persecution.

Nelson Lam, who now lives in Los Angeles, left Hong Kong in a hurry soon after the national security law was implemented in July 2020.

Lam had worked as a clerk for a government department in Hong Kong.

After the national security law was implemented, however, Lam said that his colleagues reported on each other to their superiors about any sign of support for Hong Kong’s pro-democracy movement or any criticism against the CCP.

“If it weren’t for this [national security law], I would be safe. But after 2019, it has changed, and we have all changed,” Lam told The Epoch Times.

“We have no evidence to tell you what pressure we are actually under. It is an invisible pressure that threatens you.”

Lam said that under the influence of the CCP’s policies, it’s common for private companies in Hong Kong to suppress employees with different political opinions.

He also said that many pro-CCP individuals would disguise themselves in black and join peaceful Hong Kong pro-democracy protests in order to cause trouble.

“I saw a lot of demonstrations, which were originally peaceful, but the pro-CCP people would deliberately cause some incidents, which makes people have the illusion that this demonstration is violent,” Lam said.

“If you want to leave [Hong Kong], you must leave as soon as possible. Those who don’t want to leave should keep a low profile and let those who have already gone out to unite to help recover Hong Kong.”

Sentenced to Forced Labor for Handing Out Flyers

David Li, of Upland, California, was arrested and sentenced to various forced labor camps for two years in 2010 for distributing flyers that contained information about Falun Gong.

Police broke into Li’s apartment by breaking down the door. The police confiscated his belongings, including his cellphone, computer, flyers, and Falun Dafa books. They erased much of his personal information that was stored on his computer, he said.

Li was brought to a local police station and was then transferred to a detention center in Beijing. He was placed in a small room packed with nearly 30 other people, all of whom shared one toilet.

The food they were served was extremely scarce and, at times, inedible. Li said for breakfast, they were given one piece of bread and one portion of vegetables each.

“Even some insects were inside of the vegetable soup,” he said.

After about 40 days at the detention center, Li was transferred to a forced labor camp in Bejing, where he spent about 2 1/2 months.

“There I was persecuted seriously by the policemen,” he said.

Li arrived and was placed in a room with three prisoners who were assigned to watch him and persuade him to give up practicing Falun Gong. He was forced to sit on a tiny stool that would cause severe pain after sitting on it for a prolonged period.

He was also forced to watch video programs and read articles that slandered Falun Gong from about 6 a.m. to 11 p.m. every day.

After 11 p.m., he slept in a cell with another prisoner who would monitor him.

Li was only allowed to go to the bathroom once every three to four hours. Every time he needed to use the bathroom, however, he had to submit a written request to the police. He said that sometimes these requests wouldn’t be answered by the police, even for a whole day.

After seven days, the police didn’t allow him to use the toilet, forcing him to soil his trousers.

He was denied showers and wasn’t permitted to wear warmer clothes in the winter. In the winter, Beijing reaches very low temperatures. With him having only one layer of trousers and having lost weight, he would shiver frequently.

“My whole body was shaking … because there’s no food, and it’s cold,” Li said. “You really cannot control the shaking.”

He was then transferred to another labor camp in Inner Mongolia, where he spent 1 1/2 years.

Every day, he worked with a group of about 25 people, with 3 to 5 other Falun Gong practitioners, from 7 a.m. to 6 p.m., sowing bags for fertilizer and making bottle caps. He was also required to plant corn and other crops outside of the labor camp.

Li was again transferred to another labor camp in Inner Mongolia, where he stayed in a cell with seven other practitioners. He was beaten by one of the prisoners, who crushed his throat with his foot.

“I yelled to call the policeman,” he said. “The policeman came and said, ‘It’s OK, it’s OK.’ He didn’t do anything to stop that guy.”

In August 2012, Li was released from the labor camp. He and his wife, also a Falun Gong practitioner, immigrated to the United States the following year to escape further persecution.

Woman Forced to Have Three Abortions

Ms. Sun moved to the United States after being subjected to three forced abortions due to the CCP’s family planning policies.

The CCP launched the one-child policy in 1979 to counter China’s rapidly rising population. Families who had more than one child during this period were subjected to extremely high fines, the confiscation of their property, and other abuses.

“[The staff of the CCP’s Family Planning Office] forced me to take medicine and told me that the child cannot be birthed because it violates the policy,” Sun told The Epoch Times.

“They are totally inhumane, forcing me to drink drugs with strong side effects. And after a miscarriage, I have to bear all the medical expenses by myself.”

As a result of the drugs Sun was forced to ingest, she vomited for several days, had abdominal pain, and an allergic rash covered her body. The forced abortion left Sun depressed and with severe insomnia.

“The side effects of the drug were very serious,” Sun said. “I was in low spirits and had to stop breastfeeding. My first child was only six months old at the time. As a result, she developed slowly and was very thin.”

“I knew that I had a baby accidentally, and my first reaction was not to be happy, but to be afraid,” Sun said.

The local Family Planning Office forced Sun to undergo another abortion and use an intrauterine device.

In February 2012, after the CCP implemented a two-child policy, Sun gave birth to another daughter.

However, in 2018, Sun became pregnant again and was forced to have a third abortion.

“This child did not come at the right time, because at that time China had a two-child policy, and there was no three-child policy,” she said.

The regime recently announced a three-child policy quota, where couples aren’t allowed to have more than three children.

“When to have children and how many children are people’s own rights. They should not be restricted because of any government policy.”

Xu Xiuhui contributed to this report.