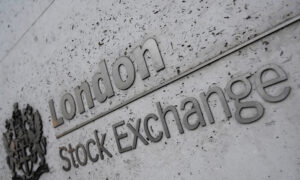 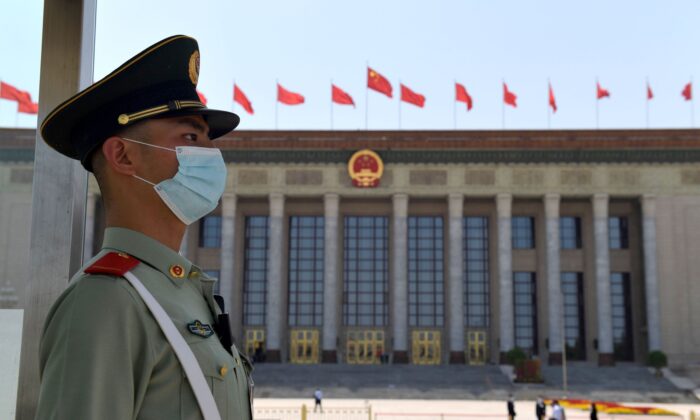 A paramilitary policeman stands guard outside the Great Hall of the People ahead of the closing session of the National People's Congress in Beijing on May 28, 2020. (Nicolas Asfouri/AFP via Getty Images)
Viewpoints

“Dotard! What is the United States but a thatched barn where brigands drink in the reek, and their brats roll on the floor among the dogs?” Chinese diplomats may not be using precisely the language Saruman aimed at King Théoden from the top of a smouldering Orthanc, but the tone is unmistakable. The kid gloves are off and the iron fist is pumping.

Consider this weekend’s outburst from the Chinese Embassy in Myanmar, reported in the National Post on July 20, in which some wolf-warrior diplomat howled that the United States was “outrageously smearing” China, and that American agencies were doing “disgusting things” and showing a “selfish, hypocritical, contemptible, and ugly face.”

The United States has, of course, been very vocal about China’s encroachment on its neighbours and its conduct in Hong Kong. As have others including the United Kingdom, which just suspended its extradition treaty with Hong Kong. But where American diplomats speak of a “larger pattern to undermine the sovereignty of its neighbours,” their Chinese counterparts snarl, “The U.S. should first look in the mirror to see whether it still looks like a major country now.”

When I refer to Chinese diplomats in Myanmar, to borrow a phrase from Captain Blood, “I state rather the purpose for which they were [placed there] than the duty which they fulfilled.” If Talleyrand exaggerated in saying “A diplomat is given a tongue in order to conceal his thoughts,” it is certainly true that they are normally expected to be “diplomatic,” that is, to express even forcible points in soothing, often soporific language.

They should not sound like Andrei Vyshinski berating a helpless, doomed prisoner in a Stalinist show trial, pausing only to wipe foam from his lips. Of course, if it were just some guy in the Myanmar embassy tweeting while drunk and choleric, it would not mean anything except that he was going home on the next flight to embark on a new career involving hand-held implements. But it’s not, and it matters.

To browbeat, insult, and threaten someone reveals that you regard them as a captive, cuffed and blindfolded, who may be kicked at will and must beg even for the boot to strike somewhere less painful. Which very pointedly corresponds with something I’d just gone to the trouble of locating in “The Lord of the Rings” because of the increasingly ataxic way the Chinese leadership is trying to cajole and threaten at the same time.

After Saruman’s disastrous performance in front of representatives of various free peoples whose ruin he had been plotting, Gandalf comments, “He cannot be both tyrant and counselor. When the plot is ripe it remains no longer secret. Yet he fell into the trap, and tried to deal with his victims piece-meal, while others listened.”

To some extent the Chinese regime is doing the same, posing as peaceful and misunderstood while having apoplexy when criticized. Back in June, a spokesman for the Chinese foreign ministry ordered Prime Minister Justin Trudeau to “stop making irresponsible remarks” about a hypothetical connection between China’s brutal treatment of Michael Spavor and Michael Kovrig and our arrest of Huawei CFO Meng Wanzhou. Never mind the sneer that “Canada is playing the role of an accomplice to the U.S.” Imagine their reaction if some Global Affairs Canada functionary mentioned in the course of a briefing that of course Xi Jinping should shut up. Even though he should.

Or maybe not, because the truth is now coming out among the grunts, hisses, and snarls. For instance, the same Zhao Lijian who told Trudeau to hold his insolent tongue also smoothly allowed that the two cases were connected, and if Trudeau would just bow down to Beijing, interfere in the judicial system and free Meng, it “could open up space for resolution to the situation of the two Canadians.” Tyrant and counsellor practically in the same breath.

Canadian diplomats use language like “concerned by the arrests of political figures” and “close scrutiny” of “extraordinary measures.” But Chinese diplomats growl about “dangerous activity” in the same thuggish language used in deadly intra-Communist Party melees. Who can forget when China’s ambassador to Canada did not merely blurt out, but wrote in a carefully crafted op-ed, of our demands to free the “Two Michaels” that “The reason why some people are used to arrogantly adopting double standards is due to Western egotism and white supremacy.”

It may wound our pride to think of such things. But in theory, the regime in Beijing might feel free to treat Canada with open contempt because we are not a major power or even, despite our conceit, a middle power nowadays. What really can we do to them if they accuse us of rolling on the floor among our dogs, except hope that others notice the language the Chinese communist regime uses once it thinks it has you at its feet?

To speak thus to the United States is another matter. Even Saruman, after giving Théoden the rhetorical business, pulled himself together and said softly “But you, Gandalf! For you at least I am grieved, feeling for your shame. How comes it that you can endure such company?” But the Politburo is no longer using such language even to the American hyperpower because the plot is ripe and, though it periodically forgets and trips over its forked tongue, Beijing is now openly tyrant, not counsellor.

One of Talleyrand’s masters in his long and slippery career, Napoleon, had as his maxim to “talk peace and act war.” But once the armies are across the borders, slaying and burning, as Saruman’s were in Rohan, the talk of peace has no further purpose.

Thus Théoden responded to his one-time counsellor’s treacherous offer of “peace” by saying “Yes, we will have peace, when you and all your works have perished,” and declaring that “You are a liar, Saruman, and a corrupter of men’s hearts. … But I fear your voice has lost its charm.”

It had, and as Saruman’s wrath burst forth, “To some suddenly it seemed that they saw a snake coiling itself to strike.”