Chinese Regime Would Have ‘Much to Lose’ if It Tries to Take Taiwan: Rep. Ted Yoho 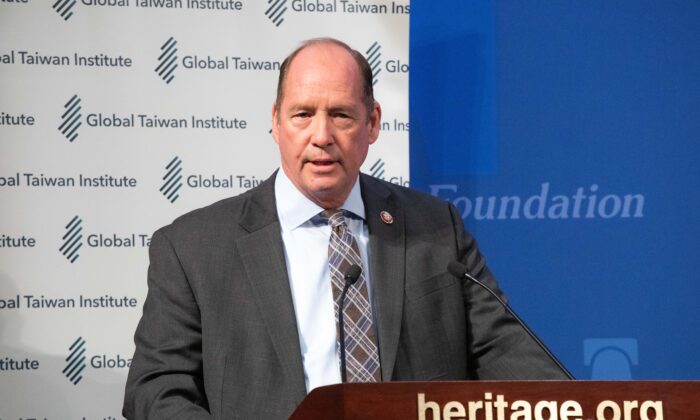 Congressman Ted Yoho speaks at an event assessing the results oof the Taiwan elections at the Heritage Foundation in Washington on Jan. 13, 2020. (Lynn Lin/Epoch Times)
By Cathy He

The Chinese regime will have nothing to gain if it tries to forcibly unite Taiwan with the mainland, Rep. Ted Yoho (R-Fla.) said days after the island’s President Tsai Ing-wen was re-elected on a platform promoting a tougher stance against Beijing.

Tsai of the Democratic Progressive Party (DPP) won a resounding victory on Jan. 11, defeating her main rival, Han Kuo-yu, of the Kuomintang party (KMT), who favors friendlier ties with the mainland, by a margin of nearly 20 percent.

Her win was widely viewed as a firm rebuke of the Chinese regime, which considers Taiwan as part of its territory, despite the self-ruled island having its own political system, military, and economy.

“The people of Taiwan have spoken very succinctly, very clearly, that they want to have their sovereignty, self-governance,” Yoho said at an event analyzing the election results hosted by think tank Heritage Foundation in Washington on Jan. 13.

In a strident response to Tsai’s re-election, Beijing’s top diplomat Wang Yi, in comments carried by China‘s Foreign Ministry, warned that “those who split the country will be doomed to leave a stink for 10,000 years,” adding that “reunification across the Taiwan Strait is a historical inevitability.”

The Chinese regime has never ruled out using military force to claim Taiwan as its own. It also proposes unifying the island under the “one country, two systems” framework, currently used to govern Hong Kong and Macau—an option firmly opposed by both the DPP and KMT.

China will “have much to lose” should it try to take Taiwan, Yoho said. “It’ll force an international backlash with countries and companies wanting to divest from China.”

The congressman added that Beijing, in its dealings with Taiwan, should learn from the ongoing pro-democracy demonstrations in Hong Kong. For over six months, the city has been roiled by protests against the Chinese regime’s growing interference in the city. Many are angered by what they view as a violation of the regime’s pledge to maintain the city’s autonomy under the “one country, two systems” formula.

“If you threaten one’s freedom, democracy, and sovereignty, there will be a huge cost paid,” Yoho said.

Bonnie Glaser, director of the China Power Project at the Washington-based Center for Strategic and International Studies, predicted that the regime is unlikely to use military force anytime soon.

She added that Beijing could also “face a massive insurgency” if it chose to resort to force.

“Look at what happened in Hong Kong. We at least have to ask the question: would the people of Taiwan fight for their own sovereignty and independence? And I personally believe that they would,” Glaser said.

In the meantime, the regime is likely to ramp up pressure on Taiwan, including by continuing to poach its diplomatic allies, and increasing military incursions into the Taiwan strait, she added.

Glaser noted that thus far, Beijing has not done much to harm Taiwan’s economy, except limiting the amount of Chinese tourists to the island. However, the regime may pursue other means to do so, if it “believes that poor economic performance will help prevent the DPP from staying in power.”

As for the regime’s insistence on using “one country, two systems” as a model to absorb Taiwan, Walter Lohman, director of the Asian Studies Center at The Heritage Foundation, told The Epoch Times’ affiliate NTD that the election results were unlikely to change Beijing’s stance.

“‘One country, two systems’ … has been dead for a long time [in Taiwan],” Lohman said, adding that the idea “never really lived” except for in the minds of the Chinese Communist Party (CCP) leadership in Beijing.

CCP leaders are unlikely to depart from this framework because “they’re in their own bubble,” he said.

“They’re thinking about these things on their own terms without enough external references, and without a bureaucracy that really has the ability to challenge conventional wisdom on it.”