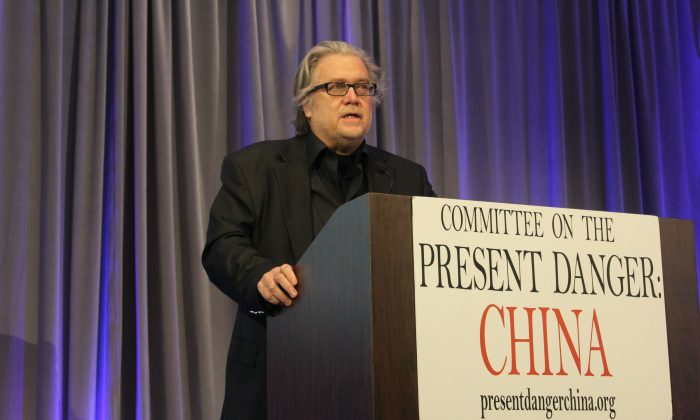 NEW YORK—The Chinese communist regime has been waging an economic war with Western democracies, and U.S. companies, financial services, and regulators need to do more to counter the threat, a group of experts warned on April 25.

A recently formed coalition of national security, financial, and human rights experts, called the Committee on the Present Danger: China, held a conference at a Manhattan hotel discussing the Chinese Communist Party’s (CCP) unrestricted economic warfare against the United States, highlighting the threat posed by the Chinese regime’s economic ascendency, as well as the role U.S. companies and capital have played in fueling its rise.

“We’re at economic war with China … [that is] this radical cadre of the CCP,” Steve Bannon, former chief strategist for President Donald Trump, told The Epoch Times’ sister media NTD in an interview after the conference.

“Right now we have a global financial system, a global economic system, that allows this radical cadre and this totalitarian dictatorship in China to enslave their own people,” he added.

This situation, Bannon said, was not acceptable.

The speakers pointed out that U.S. pension funds, hedge funds, and stock indexes, such as the MSCI Emerging Market Index, finance an array of Chinese companies that pose national security concerns or are human rights abusers.

Roger Robinson, former member of the National Security Council under the Reagan administration and current chairman of the think-tank Prague Security Studies Institute, pointed to the example of Hikvision, China’s leading manufacturer of surveillance cameras. Hikvision has collaborated deeply with Beijing to develop artificial intelligence-enhanced technology for monitoring its citizens, including in the northwestern region of Xinjiang where the U.S. State Department and United Nations experts estimate that more than 1 million Uyghurs and other Muslim minorities are currently being held within internment camps.

“Human rights abuses by companies—directly or indirectly—that are publicly traded, that are in investment portfolios, represent a material, even asymmetric, risk to share value and corporate reputation,” he said in an interview with NTD.

Currently, these kinds of risks are not disclosed to the investor community prior to investment decisions being made. Therefore, Robinson and others from the conference called on the Securities and Exchange Commission to step in and require Chinese companies to disclose affiliation to the Chinese regime and other financial information.

The experts also called out China’s One Belt, One Road (OBOR) initiative and its Made in China 2025 industrial plan as policies designed to supplant U.S. economic dominance. The former is the regime’s flagship foreign policy plan to build up geopolitical influence via infrastructure investments across Southeast Asia, Africa, and Europe. The latter is a domestic policy aimed to build the country into a high-tech superpower by the year 2025 through the development of fields including AI and robotics.

David Goldman, financial executive and columnist for the Asia Times, said the purpose of OBOR was to give the Chinese regime a source of surplus labor via other countries, as its domestic population is rapidly aging.

Chinese telecom giant Huawei is a key OBOR participant, setting up telecommunications infrastructure networks. Goldman raised the concern that this could lead to Chinese companies flooding the market with its goods and services.

Thus, in countries that sign up to the initiative, eventually “all will be workers for Chinese commercialization,” Goldman said.

He said that the United States, in concert with allies such as Japan and South Korea, should develop and offer to countries an alternative to OBOR.

Gordon Chang, China expert and author of the book “The Coming Collapse of China,” highlighted that the regime steals an estimated $150 billion to $600 billion of U.S. intellectual property each year.

“Whatever [the amount is], it is too much,” Chang said.

“We have an innovation-based economy. If we can’t commercialize our innovation, we do not have an economy of the future.”

He said that U.S. companies needed to disengage with China to ensure their intellectual property is protected.