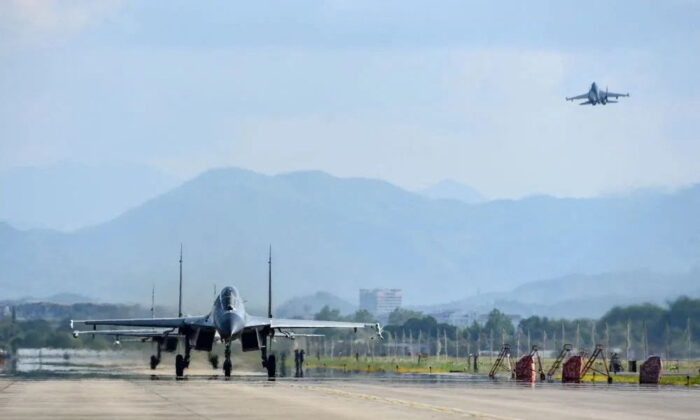 China’s military announced that it completed a number of undefined tasks around Taiwan on Aug. 10, signaling that it would be scaling down ongoing joint exercises in the region.

However, the Eastern Theater Command, which oversees China’s military in the region nearest Taiwan, also stated that it would be normalizing its harassing sorties of fighter jets into Taiwan’s Air Defense Identification Zone and across the median line of the Taiwan Strait.

“The Command will closely follow the development of the situation across the Taiwan Strait, continue to carry out military training for war preparedness, and organize normalized combat-readiness security patrol in the Taiwan Strait to defend China’s sovereignty and territorial integrity,” Shi Yi, the command’s spokesperson, said in a statement.

A total of 17 Chinese fighter jets incurred across the median line of the Taiwan Strait just an hour after the statement was released, according to Taiwan’s Defense Ministry.

Troops from several branches of the Chinese military conducted joint exercises over the past week as part of a threatening response to a visit by U.S. House Speaker Nancy Pelosi to Taiwan, which China’s communist regime claims is part of China.

The exercises took place in the waters and airspace surrounding Taiwan, forming a sort of blockade that disrupted international flights and shipping routes in a region crucial to global supply chains.

The stunt drew international condemnation from numerous forums, including the G-7, ASEAN, and IPAC, which each urged China’s communist regime to back away from the brink of starting an international catastrophe and pursue a peaceful resolution to the crisis that it created.

China’s announcement that it would pursue normalized patrols around Taiwan is likely to be seen by the international community as yet another military escalation by the regime, which earlier in the day released a white paper vowing to use military force against any who promoted the idea of a free and independent Taiwan.

The most recent round of military exercises around Taiwan, China’s largest ever, brought a limited response from the United States, which ordered an aircraft carrier strike group normally stationed in Japan to conduct routine freedom of navigation patrols through the region.

“The United States is prepared for what China chooses to do,” said White House National Security Council Communications Coordinator John Kirby at an Aug. 4 press conference. “We will not seek, nor do we want, a crisis.

“At the same time, we will not be deterred from operating in the seas and the skies of the western Pacific, consistent with international law as we have for decades supporting Taiwan and defending a free and open Pacific.”