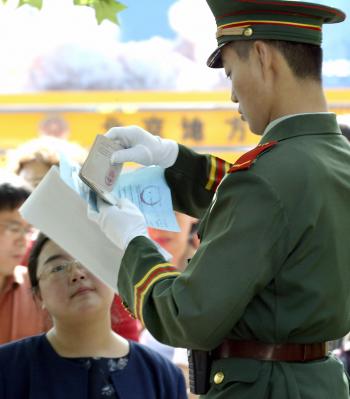 CONTROL: A Chinese paramilitary guard checks the passport of a U.S. visa applicant as she arrives for her appointment to submit her application at the U.S. Embassy in Beijing on May 17, 2004. (Goh Chai Hin/Getty Images )
China

By Heng He
Print
Passports and visas are a weapon the Chinese regime uses to control Chinese citizens and foreigners.

The renowned artist and activist Ai Weiwei was detained this past Sunday and is under police custody. His arrest didn’t surprise me since so many human rights lawyers and activists have recently been abducted.

According to the Hong Kong-based China Human Rights Lawyers Concern Group, more than 30 activists have suffered what the U.N. calls “forced disappearance.” Eight of them are rights lawyers who were arrested in February after the first Jasmine Assembly—an effort in which activists, inspired by the Middle East’s Jasmine Revolutions, would gather in China’s big cities.

Actually, the first case, in which three lawyers—Teng Biao, Jiang Tianyong, and Tang Jitian—suffered forced disappearance at the hands of the police, was not about the Jasmine Assembly. The lawyers had tried to help the famous blind lawyer Chen Guangcheng.

What surprises me is the way Ai Weiwei was detained. Ai was detained at the Beijing Airport where he was about the take a flight to Hong Kong. China’s customs is well-known for having an alarm system that signals when a person’s name matches one of the names on its list.

However, Ai Weiwei’s situation is different. His home was searched three times by the police only a few days ago. The police had no reason to wait until he reached customs to take him away. The only explanation that I can think of is that doing so was very convenient for the police.

This is not the first time that the country’s entry-and-exit control system has been used as a convenient tool by different levels of Chinese authorities. Only last week, three cases were reported.

Several days ago, German journalist and sinologist Tilman Spengler was refused an entry visa by Chinese authorities when he was supposed to accompany German Foreign Minister Guido Westerwelle on a trip to Beijing, where the art exhibition Art of the Enlightenment was about to open.

The reason given was that Spengler was “not a friend of the Chinese people.” Well, the true reason probably is that he spoke at the awarding of the Hermann-Kesten Medal to Liu Xiaobo in September last year.

Two other cases involved the denial of exit to Chinese citizens. Liao Yiwu, the author of several books and a critic of the Chinese regime, was prohibited for “national security” reasons from traveling to the United States and Australia on March 28 for his new book. This is the 15th time out of 16 tries that his attempt at overseas travel has failed.

On April 1, Du Mai, the 18-year-old daughter of Wu Huaying, was intercepted at customs at Xiamen Airport when she was about to take a flight to Japan to study. The explanation was the same—“national security” reasons. Wu Huaying had visited the state appeal offices for nine years on behalf of her brother, who had been tortured into a false confession regarding an explosion. She was also sentenced to one year in prison for helping the mother of a rape and murder victim in Fujian Province.

When the regime started to use the entry-and-exit system as a weapon for punishing both Chinese citizens and foreigners is not clear. The first known large-scale list of those banned from entering China was made up of the students who escaped from China after the Tiananmen Massacre in 1989.

Those who sympathized with the 1989 democracy movement are also on the banned list. Perry Link, a professor at Princeton University and a China expert, was denied a visa many times for that reason.

Some of the political dissidents died in exile in their 70s and 80s. Among them are Liu Binyan, one of the most famous Chinese authors and journalists; Wang Ruowang, a writer and, in the words of the Dalai Lama, “freedom fighter”; and Lin Xiling, the “last Rightist.” They were not able to go back to their homeland because they refused to accept the conditions imposed by the regime.