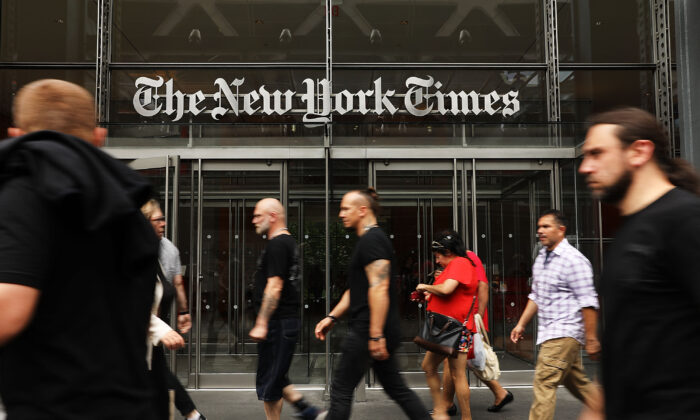 People walk past the New York Times building in New York City on July 27, 2017. (Spencer Platt/Getty Images)
By Cathy He

The Chinese regime is set to expel U.S. journalists based in China who work for The New York Times, The Wall Street Journal, and The Washington Post in retaliation for the Trump administration’s recent actions targeting Chinese state-run media outlets in the United States.

The ministry also announced that it would require China-based branches of Voice of America, the New York Times, Wall Street Journal, Washington Post, and Time magazine to report information about their staff, finances, operations, and real estate in China. That measure, it said, was in response to the United States designating the five state-run outlets as foreign missions.

In early March, the U.S. State Department designated five Chinese state-run outlets as “foreign missions,” and slashed the number of Chinese staff allowed to work at the media outlets’ offices in the United States. An administration official previously labeled those outlets, including Xinhua News Agency and China Global Television Network, as “explicit propaganda organs of the Chinese Communist Party.”

At the time, senior U.S. administration officials said such actions were an act of reciprocity against Beijing’s continued use of “intimidation to silence members of a free and independent press.”

In retaliation against the United States for reducing staff sizes at those outlets, the Chinese foreign ministry said in a March 17 statement that it would require all journalists of U.S. citizenship employed at the New York Times, Wall Street Journal, and Washington Post whose press credentials are due to expire before the end of the year to hand back their press cards within 10 days.

The ministry added it would impose “reciprocal measures against American journalists” over “discriminatory restrictions the U.S. has imposed on Chinese journalists with regard to visa, administrative review, and reporting,” without providing further detail.

Marty Baron, executive editor of the Washington Post, said in a statement that the outlet “unequivocally condemn any action by China to expel U.S. reporters.” Amid the current novel coronavirus pandemic, the regime’s decision is “particularly regrettable because it comes in the midst of an unprecedented global crisis, when clear and reliable information about the international response to COVID-19 [disease caused by coronavirus] is essential.

“Severely limiting the flow of that information, which China now seeks to do, only aggravates the situation,” Baron said.

U.S. Secretary of State Mike Pompeo, at a March 17 press briefing, said he regretted the regime’s decision to “further foreclose the world’s ability to conduct free press operations, which, frankly would be really good for the Chinese people … in these incredibly challenging global times, where more information, more transparency are what will save lives.”

He rejected the regime’s assertion that the United States’ measures prompted it to take action.

“This isn’t apples to apples,” Pompeo said. “You all know the press freedoms you have … You all get to ask me whatever questions you want, and I give you the answer. We know that that kind of freedom doesn’t exist inside of China.

“Indeed, the Chinese will tell you that they want more information, people to know more about their country, and yet they continue to take actions like the one you see today, where they deny the world the capacity to know what’s really going on inside of their country,” he added.

Pompeo defended the decision to identify the state-run media outlets as foreign missions, saying they “were not media that were acting here freely. They were part of Chinese propaganda outlets. ”

“It would be impossible not to interpret Beijing’s latest move as an effort to control the uncontrollable story, namely the spread of COVID-19,” she said in an emailed statement. “Both countries should lift any applicable restrictions and allow professional media outlets to play their role of reporting the news and calling it like they see it.”

Pompeo previously said that the measures formed part of the Trump administration’s efforts to establish a “long-overdue level playing field” in its relationship with the Chinese regime.

“For years, the government of the People’s Republic of China has imposed increasingly harsh surveillance, harassment, and intimidation against American and other foreign journalists operating in China,” he said.

While there are hundreds of Chinese nationals working in the media industry in the United States, there are only about 100 U.S. journalists working in China for U.S.-based and other foreign-based media outlets, according to an administration official.

U.S. officials also criticized Beijing for presiding over a “deepening crackdown” on independent journalism within the country. In a March 2 call with journalists, they cited examples such as the disappearance of citizen journalists covering the coronavirus epidemic in Wuhan, and the arrest of Jimmy Lai, founder of Hong Kong-based independent newspaper Apple Daily, in Hong Kong, on charges connected to his participation in the city’s pro-democracy protests last year.

Sen. Ben Sasse (R-Neb.), in a statement, said Chinese leader Xi Jinping is “terrified of a free and independent press because he doesn’t want to be challenged when his government regularly spews insane propaganda like the recent conspiracy theory that the United States created the coronavirus.

“These thin-skinned communist hacks hate the truth and are committed to covering-up their failures,” Sasse added.

Last month, the regime revoked the visas of three Wall Street Journal reporters in Beijing, citing the newspaper’s refusal to apologize for a “racially discriminatory” headline of an op-ed piece, which had called China the “real sick man of Asia.” Those reporters weren’t involved in drafting the op-ed piece.

Another reporter with the paper had to leave last year after Beijing declined to renew his visa.