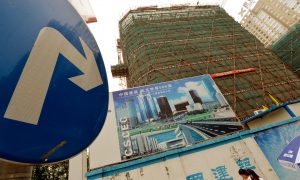 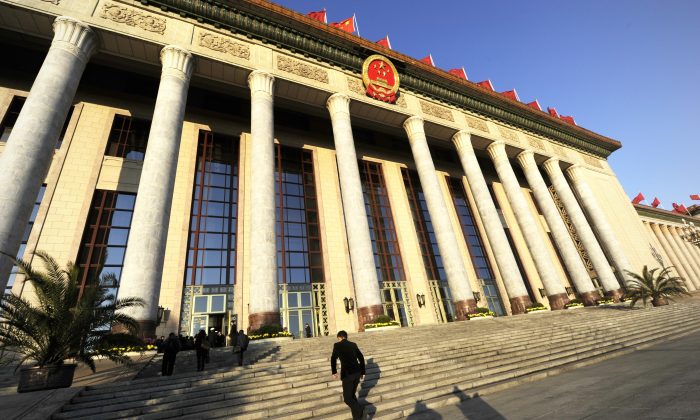 A security guard walks up steps into the Great Hall of the People before the closing of the 18th Communist Party Congress in Beijing on 14 Nov. 2012. The central government has ordered a nationwide audit of local government debt. (Wang Zhao/AFP/Getty Images)
China

China’s Audit Commission announced on July 28 the formation of a new administration to audit all local government debt, expected to begin work in early August.

The announcement triggered a drop in domestic stocks. “The audit will increase pressure on real estate and infrastructure industries while disrupting the industries dependent on regime spending,” financial researcher Lan Tianfeng told the state-run Xinhua.

A July report from the International Monetary Fund highlighted “growing vulnerabilities in local government finances which stem from a mismatch between expenditure mandates and revenue sources.” It added that local branches of the regime were largely relying on land sales to finance regime activity, a practice which, according to the National Audit Office, has been ongoing since 1979.

The IMF found that government borrowing has been increasing since 2009 and that in 2012, regime debt was 45 percent of GDP, accounting for China’s off-budget expenditure.

A former regime official and current director of a bankruptcy consulting center, Cao Siyuan, told New Tang Dynasty (NTD) Television that the regime thinks that bankruptcy isn’t a problem in socialist countries so it abolished bankruptcy law, leaving officials clueless about how to handle debt.

“Only with the recent bankruptcy of the city of Detroit, did people realize that governments can go bankrupt too,” said Cao. “For a long time, government just recklessly borrowed and incurred heavy debts.”

Local governments are in debt because they build luxury office buildings to convey a good public image, said Duan Shaoyi, the assistant director of the Tianze Economic Research Center in Beijing.

Residents in many cities are also at risk of being forcibly evicted so that their land can be sold for more real-estate development.

China has twelve ghost cities—large, uninhabited areas with real estate few can afford—including the Ordos Kamba area of Inner Mongolia, the Zhengdong New Area in Henan Province and various others.

“Investing in real estate without profits is a formula for bankruptcy for these cities,” Cao said.

The regime owes its debts to banks, local bondholders, and miscellaneous others, according to the National Audit Office of China. Local communist governments have collected $35.5 billion (218 billion yuan) in illegal bonds, according to state-run Beijing News.

A regime official from the National Audit Office stated that the bankruptcy of local governments could be prevented, but netizens on Sina Weibo, China’s Twitter-like platform thought otherwise.

“Regime debt has run rampant and an audit is no use,” a netizen from Anhui Province wrote. “To really get rid of the government’s burdens, we need subversive political activity.”