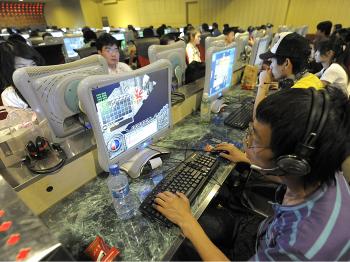 People use computers at an Internet bar in Beijing. (Liu Jin/AFP/Getty Images)
China

Beijing authorities have decided to carry out a sweeping campaign to close loopholes in China’s Internet blockade. It intends to block all free Web-based proxies throughout the country so netizens will no longer be able to access banned websites or cached information of blocked sites such as Facebook, YouTube, and Gmail.

The statement, announced by the Internet monitoring department of Beijing Municipal Public Security Bureau on May 8, said all computer Internet services in the nation must be examined, and any free or open Web-based proxy will be blocked immediately.

Despite a huge expenditure of money and personnel, the GFW is not difficult to circumvent. A Web-based proxy server is one popular solution to climb over the wall.

Open proxies are open to the public and widely used. When a user connects to the Internet, a Web-based proxy stands between the user and a website, communicating directly with both.

As such, the website only sees the proxy server; it doesn’t see the user’s real Internet Protocol (IP) address, and the user is seen as anonymous. This is known as “anonymous surfing.” It is a common way to bypass firewalls and unblock sites.

The May 8 order means netizens will be unable to use open Web-based proxies to visit blocked websites or read banned media.

According to an earlier report this week, the regime recently spent over 10 million yuan ($1.58 million) in upgrading the firewall to further tighten control over foreign websites.

The upgraded technology includes a combination of software and hardware, including probe sniffers, backbone nodes matching, machine using manual test, and other auxiliary methods applied to attack blacklisted foreign websites such as The Epoch Times and Dynaweb.