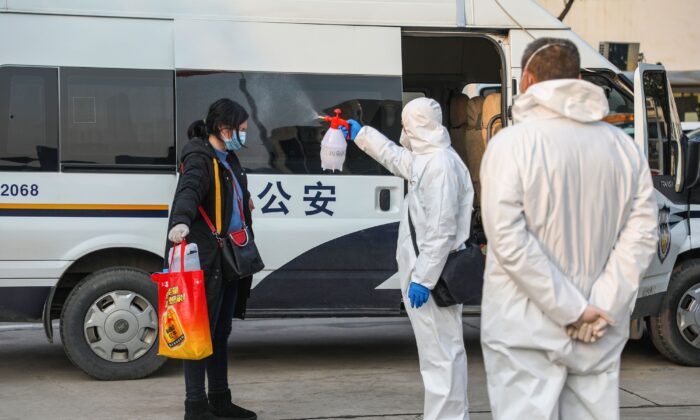 This photo taken on Feb. 3, 2020 shows a medical staff member (C) spraying disinfectant on a patient after returning from a hospital and re-entering a quarantine zone in Wuhan, the epicentre of the new coronavirus outbreak, in China's central Hubei province. (STR/AFP via Getty Images)
By Cathy He

The Chinese regime is tightening its grip on information about the coronavirus outbreak, as it seeks to control the narrative on the worsening epidemic that has seen daily surges in infection and death numbers.

Various courts across the country have issued regulations or guidelines clamping down on “spreading rumors” about the illness. Meanwhile, the government has issued censorship orders on local media that are reporting about the crisis, Radio Free Asia (RFA) reported on Feb. 3.

The measures come amid escalating criticism at home and abroad of the communist regime’s mishandling of the outbreak, with ordinary citizens, experts, and commentators accusing the regime of masking the true scale of the crisis to maintain control over the social order.

A recent high court notice in the northeastern province of Heilongjiang warned that anyone who spreads rumors about the outbreak to “incite separatism, harm national unity, or to subvert state power” may face a maximum of 15 years in jail.

The court also stated that anyone who intentionally spreads the disease could face the death penalty, although it didn’t elaborate.

The municipal high court in Beijing said it would support a crackdown on spreading rumors, as part of efforts to “safeguard social stability.”

Recently, local police action against a group of “rumormongers” in the virus’s epicenter of Wuhan drew public backlash and rare criticism from the country’s highest-ranking court.

On Jan. 1, officials in Wuhan said in a statement posted on Weibo, a Twitter-like platform, that they had “taken legal measures” against eight people who had “spread rumors” about the pneumonia-like disease, which “caused adverse impacts on society.”

“The internet is not a land beyond the law … Any unlawful acts of fabricating, spreading rumors and disturbing the social order will be punished by police according to the law, with zero tolerance,” Wuhan police said.

According to local media, the “rumor” was a message posted on Chinese messaging app WeChat, by a local doctor on a chat group for alumni of his medical school. Li Wenliang told the group on Dec. 30, 2019, that seven patients from a local seafood market had been diagnosed with a SARS-like illness and were quarantined at the hospital where he worked.

His message came one day before Chinese authorities announced the detection of the new coronavirus.

The police’s targeting of Li and other “rumormongers” sparked a public outcry, culminating in a rebuke by the highest court on Jan. 28.

A Beijing-based judge at the Supreme People’s Court, in an article posted on the court’s social media account, said local police shouldn’t have punished the eight people.

“It might have been a fortunate thing for containing the new coronavirus, if the public had listened to this ‘rumor’ at the time, and adopted measures such as wearing masks, strict disinfection, and avoiding going to the wildlife market,” the commentary said.

Yielding to public pressure, Wuhan police issued a statement the next day, saying the eight people had committed “particularly minor” offenses for spreading “unverified information.” It added that they weren’t detained or fined, but had only been summoned to be interviewed.

Li has since confirmed that he contracted the virus while treating infected patients.

Amid growing reports of authorities’ botched response to the outbreak, the Chinese regime has stepped up censorship measures against news outlets in Wuhan.

RFA, citing unidentified reporters in Wuhan, reported that China’s central propaganda department over the weekend notified several media outlets, including state-run media and Chinese business magazines Caixin and Caijing, that their previous reports on the outbreak will be subject to inspection and censorship. In addition, from Feb. 3, all of those media outlets’ coverage of the Wuhan outbreak will undergo “strict inspection.”

Chinese media outlets, such as Caixin, have provided on-the-ground coverage of the deteriorating situation in the virus-stricken city, including authorities underreporting the severity of the outbreak and hospitals being overwhelmed by patients and short on supplies.

A local reporter told RFA that many articles about the underreporting of fatalities have already been deleted, while other outlets have stopped issuing sensitive reports altogether.