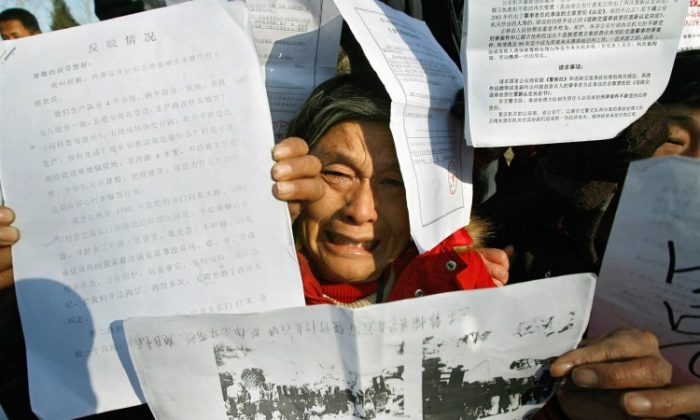 Petitioners hold up documents describing their grievances in Beijing, 2007. The Communist Party has recently moved to sweep up these individuals, along with known rights activists, in a move to suppress dissent before the 18th National Party Congress scheduled for November. (Teh Eng Koon/AFP/Getty Images)
China

Chinese authorities are clamping down on petitioners in Beijing, deploying thousands of red-arm-banded volunteers across the capital, and stepping up the surveillance and harassment of known dissidents in the lead up to 18th Party Congress in November, where a once-in-a-decade leadership transition will take place.

At least 90,000 “cleaners” have been sent onto Beijing’s streets, partly to ensure that rights activists are not congregating in public locations, and police presence has been boosted, according to Sound of Hope, a Chinese-language radio station based in San Francisco.

“There are old women wearing red armbands watching every station and street in Beijing,” said a male Beijing resident to the radio station, on Oct. 2. Old women conscripted by the regime hold red flags and stand around chatting, outside bus stations, apartment buildings, and in the streets, he said.

“People are being asked to show their IDs in the subway, if you look suspicious or look like you’re from some other place,” a female Beijing resident said.

On Sept. 26 Beijing police launched a large-scale ransacking of the temporary residences of petitioners in Beijing. They obtained a number of addresses through informants and packed off petitioners to a detention center before handing them over to local authorities for transportation back to their home provinces.

Chinese petitioners travel from around the country to the capital to seek redress for perceived injustices that could not be resolved at the local level. The system, a variation of that which existed in premodern times, is meant to be an outlet to the legal system, which can be easily manipulated by Party cadres at the local level. Yet very few of the cases presented to the Office of Letters and Calls, which petitioners present their claims to, are actually dealt with, and the individuals that seek justice are marginalized and regularly detained, abused, and mistreated by the regime’s security forces.

Local authorities from different provinces in China are responsible for repatriating petitioners that travel to Beijing back to their respective provinces.

Petitioners are not the only ones being targeted by Party authorities. Noted dissidents, such as the activist Hu Jia, who has previously been jailed and was at one point a cause celebre in newspapers outside China, have been put under strict surveillance.

Hu Jia could not visit his parents on the recent Mid-Autumn Festival, and he has seven or eight police watching him or stationed near his residence at all times, he said in a recent interview with Sound of Hope.

The surveillance extends to an almost comical degree. “The security camera will turn as I turn, so wherever I move, I will be monitored by the camera,” he said in the interview.

“The security cameras are connected to public security agencies. New and modern technologies are embraced for the purpose of ‘maintaining social stability’ to such extent that one’s personal space is intruded. The regime will go to the great expenses in order to stay in power,” he said.

The phrase “maintain social stability” is a catchall slogan used by the regime to justify the actions it takes to suppress the rights of Chinese citizens, according to researchers of human rights conditions in China.

Mao Hengfeng, a Shanghai-based activist and defender of human rights, was arrested on Sept. 30 from a bus stop in Beijing, according to her husband, Wu Xuewei, speaking to SOH radio.

Plainclothes police officers simply took her from the street, and after holding her for two days, took her to a detention center at 1 a.m. on Oct. 2. Fellow activists were also detained, all in the name of preventing disturbances before the Communist Party’s congress convenes.

The Party’s carefully-orchestrated transfer of power was supposed to demonstrate the stability and institutionalized nature of the communist leadership, which lacks any external constraints on its power. But instead the transition, and the leadership, has this year been marred by a series of scandals, beginning with the defection of Chongqing police chief Wang Lijun, and then the Bo Xilai saga that has yet to conclude.