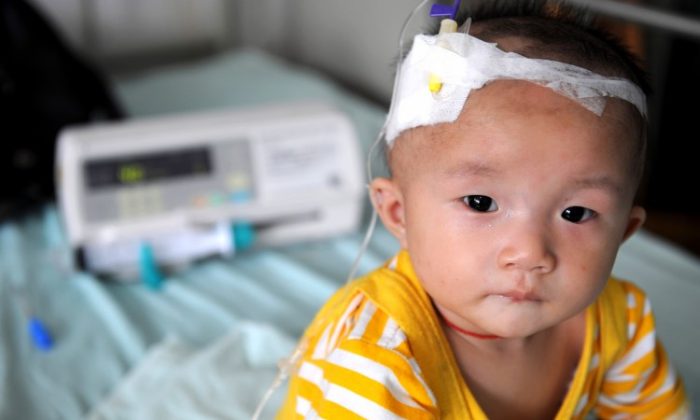 A baby who suffers from kidney stones after drinking tainted milk powder, gets IV treatment at the Chengdu Children's Hospital on Sept. 22, 2008 in Chengdu of Sichuan Province, China. (China Photos/Getty Images)
China

A Chinese official recently announced that most of the baby formula milk powder in China is fine—but try telling that to the thousands of Chinese who journey to Hong Kong to buy uncontaminated products.

The number of people buying up Hong Kong’s milk powder reserves got so bad that the government there just passed a two-can law saying no one could take more than 1.8 kilograms of it out of the country—but even after that, eight milk smugglers were arrested on the first day. The penalty for violation is harsh: HK$500,000 (US$64,515) and two years’ imprisonment.

All that is why, after regime spokesperson Lyu Xinhua told the public there is nothing to worry about, the public was incensed. Lyu is spokesman for the Communist Party’s advisory body that has been, along with the regime’s rubber-stamp legislature, holding a major set of political meetings in Beijing since March 3. He referred to a report by China’s quarantine authorities that said 99 percent of the milk powder in the country is good, adding, “I believe the relevant departments have already taken measures and the problems will be addressed gradually,” according to China Daily.

People weren’t convinced, though. “Regardless of what they say, people do all they can to bring infant formula in from overseas, and refuse domestic products,” Xiang Qingyu, the father of a baby who was poisoned by contaminated milk powder, told Sound of Hope (SOH) Radio Network. “Since 2008, people have lost confidence in domestic powdered milk. They question the quality even more so now.”

In 2008, there was a significant public scandal over powdered milk that had been contaminated with melamine. The regime said that 300,000 babies were harmed, including six who died, but Xiang says the number could be multiples of that, judging by the reluctance of doctors to diagnose his own son with kidney stones.

Lin Zixu, an independent analyst of Chinese affairs, told SOH that the melamine scandal was “a shameful incident,” and Chinese officials should have felt embarrassed, but instead Lyu attempted to whitewash the regime’s image.

“Chinese tourists have caused baby formula shortages in many places in Europe, America, Australia, and Hong Kong,” Lin said. “Doesn’t this show there’s a problem with the milk in China?”

Based on Lyu’s 99 percent statement, even if most of the milk is actually safe, that means about 200,000 babies in China are drinking substandard products. “That’s still a huge number!” Lin said.

“What formula are Lyu Xinhua’s grandchildren drinking?” one commentator wrote.

“Would the spokesman please explain which the 1 percent unqualified products are so that parents can avoid them?” another asked. “If he really knew the answer, it wouldn’t be hard to say!”

A third said: “All the officials involved with the Sanlu tainted powdered milk incident kept their positions. How can the public have any confidence at all?”

Prominent Chinese economist He Qinglian addressed the issue in her latest commentary. “The shortage of quality milk powder indeed reflects many of the big problems China is facing, like the government’s credibility, manufacturers’ reputations, environmental pollution and its effects on the food chain.”

Ms. He noted that, despite its rapid economic growth into the world’s second largest economy, China cannot even satisfy the needs of its own mothers for safe milk powder.

“From whatever angle you look at it, this is a tragedy for China. It’s the result of countless political farces, one on top of the other. If even little cans of milk powder cannot put Chinese mothers’ minds at ease, can Beijing’s dream of becoming a superpower really come true?”