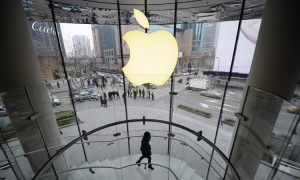 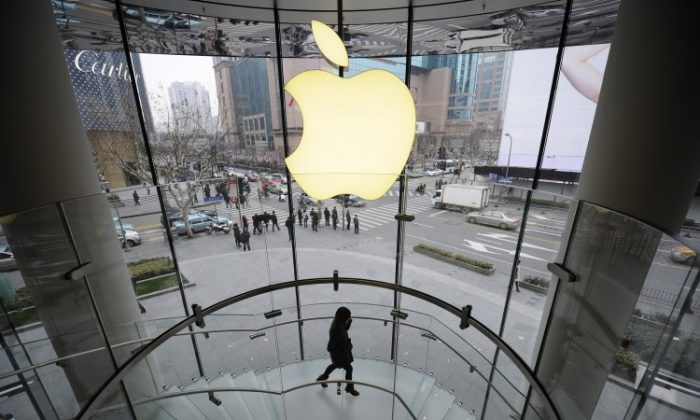 A customer walks under an Apple logo at an Apple store in Shanghai on Feb. 22, 2012. An Apple computer with filtering software installed on it was recently shipped from Shanghai to a customer in New York. (PETER PARKS/AFP/Getty Images)
China

Recently the state-controlled media in China have turned on American computer giant Apple. The company has been taking a public relations black eye for what state-run media say is poor customer service, but Apple’s real crime has been protecting the privacy of its customers, according to sources.

The controversy began on March 15 when CCTV, which functions as a mouthpiece for the Chinese Communist Party (CCP), announced on a special program for Consumer Rights Day that there is a “double standard for China and the outside world” in Apple’s after-sales services.

Apple responded on the same day saying the company values the opinions and suggestions of all consumers.

Other CCP mouthpieces, People’s Daily and the Global Times, and other state-run media then all published articles criticizing Apple. Those articles insisted this was a commercial matter and had nothing to do with politics.

On March 23, Apple released a statement on its website defending its customer service: “Chinese consumers enjoy the highest standards of service from Apple. Our policy fully complies with local laws and regulations. The warranty policies that Apple provides in China are basically the same as in the United States and around the world. “

This was then followed just over a week later by a lengthy apology letter in Chinese from Apple’s CEO, Tim Cook, in which he promised specific improvements in Apple’s customer service. The letter happened to be released on the evening of April Fool’s Day in China.

The state-run media’s attacks on Apple have not been because the company serves its customers poorly, but because it doesn’t comply with the wishes of the Chinese regime to monitor and censor those customers.

A source in Beijing familiar with the matter told The Epoch Times that Apple is extremely strict when checking its products. As soon as any Chinese-made “rogue software” that compromises user privacy is discovered, Apple takes the product off the shelves.

As a result, the CCP has had a harder time monitoring and collecting private information from Apple users in China.

In addition, sources familiar with Apple’s operations revealed that “political mistakes” committed by the company included providing email services and putting some product servers outside of Chinese territory. These actions have angered the CCP, sources say.

The Wall Street Journal noted that the products in Apple’s iTunes store are out of the reach of Beijing’s censors, and Apple has started encrypting searches and downloads in China since December. In addition, the software available in Apple’s Apps store is relatively well protected against the regime planting malware on it.

Apple has a lot at stake in China. In the first quarter of 2013, sales in mainland China accounted for 12 percent of Apple’s global market.

Apple has run afoul of the Chinese regime by remaining true to its mission of giving customers the best possible user experience. The recent media pressure put on the company raises the question of whether the CCP is seeking to force a compromise on that mission by, for instance, having Apple agree to install censorship software prior to shipment.

The Financial Times (FT) reported on April 4 that, “Apple has removed at least one online application from the China App Store because it provides access to books that are banned by the Chinese government, according to the developer of the app.”

The Epoch Times recently reported on an Apple iMac-27 computer shipped from Shanghai to New York that seemed to contain censorship software. The computer, which had been ordered by a Falun Gong practitioner, would not open any websites related to the spiritual practice of Falun Gong.

Apple said the cause of the malfunction was unknown and offered to repair the computer.

At the end of 2012, Tim Cook released a statement that Apple was planning to invest one hundred million dollars to move some of its production back to the United States.

One month later, Apple announced an iMac factory had begun operating in Fremont, California, not far away from the Cupertino headquarters. This plant is operated by Taiwan-based Quanta Computer, and listed by Apple as one of its final assembly facilities.

Since last December, Foxconn, the largest maker of Apple products, has stopped hiring workers in mainland China and also delayed a planned project in Zhengzhou, China.

At the same time, Foxconn announced it would build new plants in three locations in Taiwan, invest one hundred million dollars in Indonesia to open new facilities, and hire 10,000 workers in Brazil. Foxconn is also expanding its U.S facilities and now some of its parts are being manufactured in California and Texas.

Jia Jinchi from mainland China posted a message on ifeng.com on April 4 commenting on the Apple affair: “I just heard the news of Apple’s apology and feel it’s so similar to the Google in 2009. A company who declares in its charter a policy of doing no evil is driven off… I never felt it was Google’s fault and our descendants will mock what we are doing today when they look back at this period of history.”