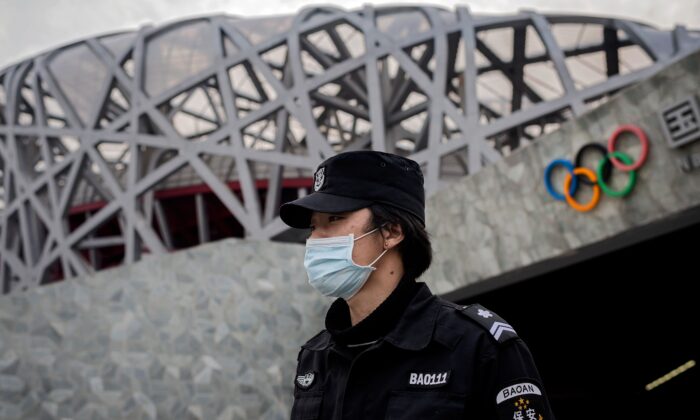 A security guard wearing a safety mask at a secure area in the Olympic park outside the 'Birds Nest' stadium, venue of the 2022 Beijing Olympics, on March 24, 2020. (Nicolas Asfouri/AFP via Getty Images)
Chinese Regime

Chinese Regime Handpicked Olympic Spectators Who Were Made to Follow Confidentiality Rules: Reports

After the Chinese regime barred Winter Olympics ticket sales to the general public over COVID-19 concerns, it ended up giving tickets to carefully selected employees of Chinese state-owned enterprises instead.

Organizers didn’t want the venues to look empty, so the day before the opening ceremony of the Games they invited about 150,000 people to attend various events. Those chosen included diplomats, businessmen, students, local residents, and sponsors, but their exact identities were kept secret, the Wall Street Journal reported. All were told they had to abide by confidentiality rules and not post on social media or discuss their game-watching with the outside world without authorization, the Journal reported, citing people with knowledge of the matter.

The Chinese organizers of the Beijing Winter Olympics conducted a series of strict checks on people entering to keep them outside the closed loop used only by athletes and coaches, and ensure there was no direct contact with them, according to Associated Press and Wall Street Journal reports.

Even with invited spectators, the atmosphere at the venue wasn’t as lively as in previous Winter Olympics, with metal barricades and guarded checkpoints separating those inside the closed-loop system from everyone else.

Spectators had to pass a strict and complicated health screening process before entering any venue, including showing proof of vaccination against COVID-19. Those who received the Chinese-made vaccines were also required to have a booster shot, the Journal reported.

In addition, the spectators were not allowed to leave Beijing within 14 days before the games started, and had to present proof of two negative nucleic acid test results within four days before an event. After attending events, spectators and co-residents living in Beijing underwent week-long health monitoring, and had the scope of their movements limited to their residences and work places. According to one of the invited spectators, these public health requirements were cumbersome and affected public interest in attending the games.

One spectator said that an Olympic sponsor had difficulty finding employees and customers who were eligible to use the free tickets because so few could meet the strict COVID-19 control requirements.

Also, before entering the Olympic venues, each person had to show a mobile phone app that tracked their movements and fitness.

Gao Jia, an employee of an Olympic sponsor who received tickets for the opening ceremony, told AP that spectators gathered at a hotel to undergo security checks before being taken to the Olympic Park on the north side of Beijing on foot. They walked two miles to the National Stadium, she said.