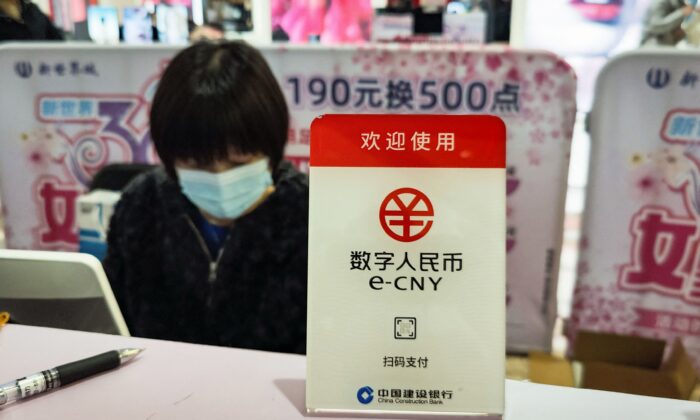 The Chinese Communist Party (CCP) recently launched a new round of campaigns promoting its Central Bank digital currency, the digital renminbi, to further increase its use among the general public.

Experts warn that a digital, highly centralized version of the renminbi could further enhance the regime’s control over the Chinese citizens.

The digital renminbi, also known as e-CNY, is a digitized version of China’s legal currency, that the CCP has been developing as a virtual legal tender and replacement of the physical fiat currency since 2014.

The CCP announced the first group of digital renminbi pilot cities in late 2019 and expanded the trial program to 23 cities in April 2022.

As part of the promotion, many pilot cities have recently launched giveaways, discounts, and other incentives for those who register their digital wallets through a smartphone app developed by China’s Central Bank.

For example, according to Chinese state media Global Times, the government of Shenzhen’s Futian district announced a 15 million yuan (about $2.27 million) giveaway in April for people who register digital wallets. Other cities, such as Xiamen, have begun paying government workers’ salaries partially in digital renminbi.

A Tool for Totalitarianism

Frank Tian Xie, a Professor of Business at the University of South Carolina Aiken, believes that the digital renminbi will not be as safe as the Chinese government claims.

Prof. Xie told The Epoch Times that the digital renminbi differs from typical cryptocurrencies in that it does not use Distributed Ledger Technology (DLT), which means that the digital token is controlled by a central authority instead of by the user.

AliPay and WeChat Pay are the two largest payment methods that have over 90 percent market share in China according to a 2020 research paper by Aaron Klein titled, “China’s Digital Payments Revolution.” Since 2020, the two companies have been targeted repeatedly by the CCP for violating antitrust laws.

William Yu, an economist at the UCLA Anderson School of Management, also regards financial surveillance by the Chinese regime to be problematic.

“The fact that China’s Central Bank will have a record of the entire transaction process of any amount for any individual is a very worrisome situation,” Yu said.

“Even if the concept of a decentralized Web3 becomes a reality, the CCP will still try to control it, just like it did with China’s economy, finance, and information,” he said.