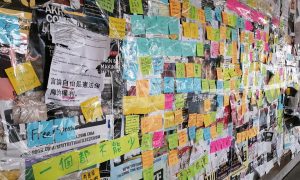 Events in Support of Hong Kong Activists Disrupted on Campuses Abroad, Including Canada
0

New Zealanders are criticising a metropolitan newspaper over running Chinese Communist Party (CCP) propaganda advertisements in a weekly paper for over two years.

The New Zealand Herald reported on August 3 that the CCP’s consulate in Christchurch had been placing propaganda advertisements into a prominent Christchurch newspaper for the past two-and-a-half years.

According to the Herald, the adverts, which have been appearing regularly in the Christchurch Star, push the Chinese regime’s stance on a range of issues including COVID-19 and the recent persecution of Uyghur Muslims in China’s Xinjiang area.

The last advertisement appeared on June 18 and promoted the CCP view of the Hong Kong national security law imposed by Beijing.

Marc Latigne, a China expert at the University of Tromsø in Norway, told the Herald this was concerning because the New Zealand government had recently suspended an extradition treaty with Hong Kong because Hong Kong is no longer seen as an independent judicial actor.

Lanteigne noted the fact that New Zealand is a target for propaganda shows New Zealand “is seen as a very important factor in a lot of Chinese foreign policy thinking.”

“Certainly, the fact that New Zealand is seen as a major recipient of Chinese publicity or propaganda.., should be looked at very carefully,” said Lanteigne.

It has also “gone against commitments China made to the international community,” said Peters.

“New Zealand can no longer trust that Hong Kong’s criminal justice system is sufficiently independent from China. If China in future shows adherence to the ‘One Country, Two Systems’ framework, then we could reconsider this decision,” said Peters.

“New Zealand remains deeply concerned at the imposition of this legislation, and we will continue to monitor the situation in Hong Kong as the law is applied. As a result, the review of our cooperation settings with Hong Kong will be ongoing,” Peters said.

The deputy prime minister also said that New Zealand would be reviewing its overall relationship with Hong Kong and immediately updating the country’s travel advice to alert New Zealanders to the risks presented by the new law.

The Ardern government will also change how they treat the export of sensitive goods to Hong Kong. “From now on, we will treat military and dual-use goods and technology exports to Hong Kong in the same way as we treat those exports to China,” said Peters.

The suspension by New Zealand comes after Australia, the United Kingdom, Canada, and Germany all suspended their extradition treaties with Hong Kong.