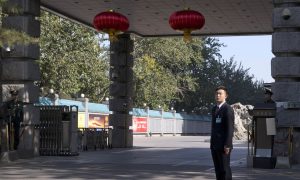 According to China’s state-run media, a policy will quietly end that gave local officials incentives to punish individuals from their jurisdictions who appealed in Beijing for the redress of grievances.

The Petition Regulation had its origin in the early days of the persecution of the spiritual practice of Falun Gong. Then-Chinese Communist Party head Jiang Zemin feared how many people had taken up the practice—greater than the membership of the CCP—and also feared the attractiveness of its teachings to the Chinese people. He ordered the practice eradicated.

Immediately after Falun Gong was banned on July 20, 1999, Falun Gong practitioners began pouring into Beijing to appeal to the central authorities to reverse their decision.

Sports stadiums were filled with detained practitioners, and, in spite of rough treatment at the hands of officials, the practitioners kept coming. According to practitioners who were in Beijing at the time, there were around 1 million practitioners gathered in and around the city in October 1999, who came to appeal.

In a series of articles describing the persecution of Falun Gong in the town of Weifang for which Ian Johnson would win a Pulitzer Prize, he related how local officials came to be held accountable for practitioners going up the road to Beijing, 300 miles away.

“There’s no doubt the petition ranking system was one of many attempts to force the rank and file to prevent Falun Gong practitioners from making appeals.” Levi Browde, executive director of the Falun Dafa Information Center, tells Epoch Times over email.

In 2005, this system of holding local officials accountable was formalized in the Petition Regulation. According to the regulation, a list of the number of petitions originally from all the provinces in China is kept. That list then is used to help determine an official’s political achievement, according to state-run media reports.

“For many years, there have been two major tasks when evaluating and selecting local government officials in China. One is the local GDP, and the other is the maintenance of stability, meaning there can’t be many petitioners ‘disturbing the society,’” Yang Jianli, a longtime democracy advocate and the founder of Initiatives for China, a civil rights organization, told Epoch Times over phone.

He added, “The Chinese regime doesn’t evaluate how many grievance cases there are due to the failure of local governing, but just to see the number of petitioners. The petition ranking among provinces is very ridiculous.”

The Petition Regulation became part of the stability maintenance system—the collection of practices used by the CCP to suppress dissent in the populace.

While the inspiration for the Petition Regulation was the attempt to keep Falun Gong practitioners from making highly visible protests on Beijing’s Tiananmen Square, the policy soon targeted others.

Falun Gong practitioners began changing their tactics, choosing quieter forms of civil disobedience to get their message across.

Farmers whose land was expropriated by local governments began coming to Beijing to appeal for relief. As did those suffering from industrial pollution, or abuses of the one-child policy, or any of a long list of grievances in today’s China.

The pressure on maintaining stability pushes the Chinese regime into a “vicious circle,” according to Yang Jianli, and abolishing the Petition Regulation will fail.

“Abolishment of petition ranking can’t solve the problem anyway, because the issues of the local government are not solved,” Yang said. “If the Chinese government keeps on plundering people financially and suppressing them politically, petitioners will still have grievances and keep on petitioning in Beijing, which brings pressure to security. Thus, local governments still have the pressure of maintenance of stability. Then, they’ll keep on suppressing petitioners.”

According to Yang, different kinds of reforms are needed in order to end the exodus of petitioners to Beijing and their subsequent abuse.

“First, courts must be independent so that they can solve the issues between people and the local governments. Second, there must be public supervision of the governments. People need to have free speech, and media needs to be free to report. Only by doing so, can the governments gradually change,” Yang said.

The Chinese lawyer Liu Xiaoyuan commented on Sina Weibo a twitter-like social media in China on the futility of the petition reform.

“In a nation whose judiciary is not independent and that has little rule of law, local officials will misbehave, whether or not there is pressure and supervision on petitioning.”

Even if the petition regulation is abolished, Yang sees the stability maintenance policies as something the CCP cannot abandon.

“It’s obvious that [CCP head] Xi Jinping has strengthened the suppression on civil forces and freedom of speech, such as the crackdown on internet speech, because he is afraid of unpredictable mass movements and group protests,” Yang Jianli said. “Once Chinese people have the freedom to appeal, they for sure will go on the street and protest, which will threaten Xi’s Communist rule. If he doesn’t want to lose his rule, he won’t change the policy of maintenance of stability.”