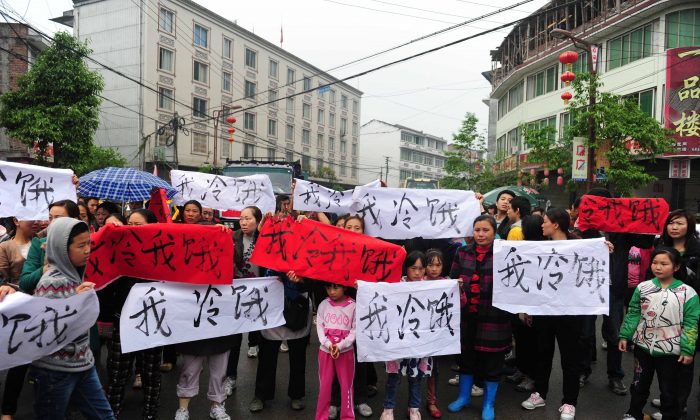 After an earthquake struck southwest China's Sichuan Province, residents in Lingguan township of Baoxing county gather on the street with banners saying 'I am cold and hungry' to appeal for support and to draw attention the shortage of relief supplies, on April 23, 2013. The Communist Party has been preventing volunteers from assisting victims in case the true number of casualties and the poor construction of the buildings is revealed. (AFP/Getty Images)
China

The Communist Party has banned civilian volunteers and groups from entering the Sichuan earthquake disaster region without permission, and is also calling for donation of money instead of supplies.

When the four men arrived at Ya’an city, they were blocked by the local stability maintenance department, and taken to a police station. The officers checked their identities, and then said they were “not welcome.”

Huang said that the police told them not to “cause trouble,” and that it would be bad for the locals if they went to the disaster areas.

Huang’s center has again revealed poorly-constructed projects that collapsed in the Ya’an earthquake. He said the communist authorities are afraid they would see more examples if they went to the scene. “The authorities don’t want us to have close contact with local quake victims. I think this is mainly because they don’t want us to expose problems associated with the quake.”

The day after the Ya’an earthquake, the Foreign Affairs Ministry issued a statement, saying that China has adequate rescue and medical forces, and relief supplies, and foreign assistance is not required for the time being.

However, two news reports issued by official media People’s Daily and China National Radio contradicted this statement, saying there is a shortage of relief supplies, with 30,000 tents and 40,000 blankets and clothing needed, and that Ya’an has food and water shortages, with only enough water to last three days.

Shenzhen-based author Zhu Jianguo told NTD that he also believes the regime is trying to hide the real situation in the disaster areas. “If any other third-party rescue forces arrived there, the truth would be revealed against the authorities’ wish. So the government rejected foreign and even non-official rescue assistance as early as possible”

Many netizens were upset that the authorities refused the donation of supplies and only wanted money, especially as media said there is a severe shortage of relief materials.

One Internet user blogged: “I told them, ‘We can’t possibly place money in your care. The Red Cross has been notorious for its corruption. I won’t give a penny to the government-run Red Cross.’”

Others commented that the Communist Party has insisted on taking a closed approach to the rescue effort, and that it places more importance on stability maintenance than people’s lives.

Translation by Jane Lin. Written in English by Cassie Ryan.