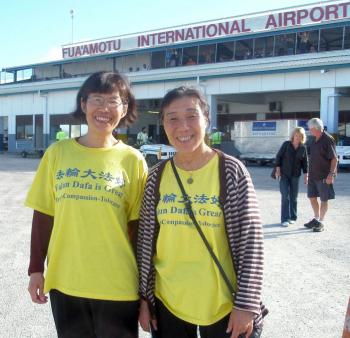 Charlotte Cuthbertson
Senior Reporter
Charlotte Cuthbertson is a senior reporter with The Epoch Times who primarily covers border security and the opioid crisis.
View profile
Follow
biggersmaller
Print
The small islands of Tonga in the South Pacific were at the center of a wrangle over freedom of religion and speech last week. At the heart were two middle-aged women in Tonga on a very personal mission.

"Our visit caused a lot of waves," she said. "The Chinese Embassy tried to pressure the Tongan government to stop us from doing anything related to Falun Gong."

A letter sent to the Ministry of Foreign Affairs on May 18 clearly threatens the health of China-Tonga relations if the practitioners were allowed to continue their activities unrestrained.

The womens' day trip to Tonga's capital, Nuku'alofa, was a focal point of the Embassy's letter.

The message of the letter was direct, stating in part: “In order to keep the good momentum of our cordial bilateral relations… we kindly request the Tongan government to take immediate and appropriate actions to prevent the gathering happening and avoid possible harm to our longstanding friendly cooperation.”

Ms. Shao said the women had not planned a “gathering” in Nuku'alofa, and the Chinese Embassy were running scared of Falun Gong because it gives spiritual freedom to people.

“Communism is based on atheism. The Chinese Communist Party has tried to stamp out all of the beliefs in China, because they want to control people. They get scared when people learn the truth.”

The letter also claims that the practitioners had held activities to discredit the Chinese regime over the previous several days.

According to the women, two days before the letter was sent, three immigration officials visited them at 9 p.m. in their hotel.

“They asked some questions and checked out our passports,” said Ms. Shao, who added that they talked for about 30 minutes.

The following day, as the women held banners along the seaside road, they said that a Chinese person came over and said he knew they were in Tonga.

“I asked how he knew and he said the Tonga Chinese Business Association had held a meeting the previous evening and discussed it," said Ms. Shao. "He said the association will take action against us and warned us to be careful because this organization is controlled by the Chinese Embassy.”

The Chinese ambassador in Tonga could not be reached for comment.

Ms. Shao said someone from a local media outlet approached them. A local TV station, TV 2 also aired news of Falun Gong and the womens' visit on the second day of their stay.

The Tongan Ministry of Foreign Affairs responded to the Chinese Embassy's letter swiftly.

A memo obtained by The Epoch Times was marked “Urgent Attention”, and sent by the Ministry of Foreign Affairs to the heads of department, commander of the Tonga Defense Services, and the statutory boards on May 18. The memo seeks advice and assistance from the prime minister's office, the police, Tonga Defense Services, the crown law office and the solicitor general.

“I would appreciate if you would alert your staff to the Falun Gong activities and avoid compromising Tonga's good relations with China,” the memo states in part.

The Ministry of Foreign Affairs in Tonga could not be reached for comment.

A government official who met with the practitioners said, "You two [ladies] are what the Chinese Embassy is afraid of? Really interesting, inconceivable," according to Ms. Shao.

On the final day of the womens' visit, Ms. Shao said the hotel housekeeper had been phoned by immigration and questioned the evening beforehand.

The housekeeper said he had learned from the immigration officer that the Chinese Embassy was afraid of the yellow T-shirts the practitioners wore, because they bore words, "Stop the Persecution of Falun Gong."