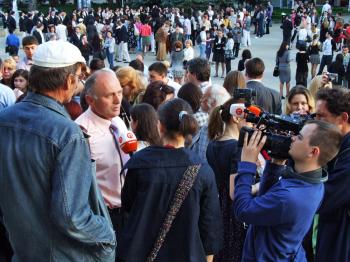 Prof. Dumitru Roman, representative of the Moldovan Falun Dafa Association, speaks to Moldovan local media in Chisinau, amidst hundreds peacefully appealing to have Shen Yun perform in Moldova May 25. (The Epoch Times)
Europe

CHISINAU, Republic of Moldova—The National Theatre of Opera and Ballet in Moldova closed its doors to a Shen Yun Performing Arts performance scheduled at the venue this Tuesday, reneging on a contract it had with the show presenter.

During the ongoing Shen Yun Performing Arts world tour, following shows in more than 20 countries, the dance company was denied access to the theater building May 25, the very day the show was to first premiere in The Republic of Moldova.

However, in the days prior to the abrupt closing, the Chinese Ambassador to Moldova attempted to pressure the Moldovan Minister of Culture, Boris Focsa, and the Director of the National Theatre, Valeria Seican, to cancel the performance, said Tatiana Chiriac, President of the Moldovan Falun Dafa Association.

Both officials told Chiriac that the Chinese Ambassador told told them there would be economic consequences to Moldova if the show was allowed to go on, she said.

The President of Moldova, Mihai Ghimpu, was positively inclined towards Shen Yun, said Chiriac, as was Seican, the theatre Director, who vowed to resist the Chinese embassy pressure. Apparently, however, she gave in at the last minute, observed Chiriac. None of the officials were available for comment at the time of writing.

Shen Yun Performing Arts is the top classical Chinese dance company in the world. Shen Yun is based in New York, and has three companies performing around the world. Performances have delighted audiences in Asia, Europe, North and South America, including on some of the world's top stages such as Radio City Music Hall in New York, the Palais Royale in Paris, and Kennedy Center in Washington, DC. Since 2006, Shen Yun has delivered over 500 performances worldwide, to an overall audience of over a million people.

The mission of the Shen Yun Performing Arts is the revival of milennia-old Chinese cultural traditions, ones that were largely destroyed by the Chinese Communist Party (CCP) in its attempts to eradicate traditional Chinese culture during decades of rule, especially during the Cultural Revolution.

Since Shen Yun began touring, there have been multiple instances of the Chinese diplomats trying to pressure theaters as well as governments into canceling the show. The lockout comes on the heels of Beijing diplomats attempting to force the cancellation of the Shen Yun performance in Odessa, Ukraine, scheduled for May 28.

Tuesday demonstrators gathered in front of the Moldovan government building for a peaceful appeal.

"Leave Culture outside politics,” and, "Moldovan government should not yield to the pressure of the Chinese embassy," were examples of messages on banners displayed by the hundreds of people that gathered on May 25 in front of the Moldovan government headquarters to support Shen Yun.

"Art is something inclusive, stimulating, and has the amazing ability of uniting all people across the globe. Art allows us to put aside our differences and appreciate other cultures. It is this that the Chinese regime fears,” wrote European Parliament Vice President Edward McMillan-Scott as part of this year's European Parliament welcome address to Shen Yun.