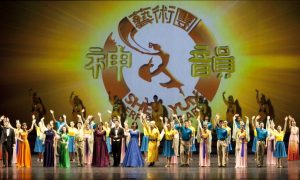 Just weeks before New York-based Shen Yun Performing Arts is scheduled to perform at one of Spain’s major opera houses, the organizers were told that their show was “forced to [be] canceled” due to technical difficulties. But the organizers do not think this is the case.

Royal Theater’s director sent a letter on Jan. 7 to Puro Arte Humano—the organizers of Shen Yun in Spain–informing them the performance has been canceled citing “unavoidable artistic needs of the stage space.” Shen Yun was set to perform at the Madrid theater on Jan. 31 and Feb. 2.

The director said another show, Das Rheingold opera, that was performing the day before and after Shen Yun, would have difficulties dismantling their sets to accommodate the dance and music company. This was something the theater technical managers did not have a problem with at the time the contract was signed.

Puro Arte Humano said in a press release the stated reason for the cancelation was not convincing and they suspect the real reason was due to Chinese Communist Party (CCP) pressure based on previous experiences. The organizers believe the Chinese Embassy has put pressure to cancel the show at the Royal Theatre of Madrid, as they did to the National Theatre of Catalonia in 2014 but without success.

Sandra Flores Gomez, vice president of Puro Arte Humano, said the cancelation is unacceptable and the circumstances surrounding the incident were “bizarre, strange, [and] unorthodox.”

“If there is a technical problem you can talk to the technicians of the company and look for a solution,” she said.

The nonprofit organization said that similar scheduling of the Paris Opera Ballet shows, which is performing in between Das Rheingold opera show dates a week before Shen Yun, was not a problem with the theater and the shows have not been canceled.

Additionally, Gomez said the Royal Theater was actively improving its relationship with the CCP and had recently agreed to exchange shows with China. According to a press release, the theater signed a contract with Beijing’s National Centre for the Performing Arts in May last year to engage in the exchange of productions and co-productions of both theaters. Sources also told The Epoch Times that the theater’s general manager was in China on Jan. 14 and 15 this year.

“It is no secret to anyone that the theater has very good relations with the Chinese Communist Party,” she said. “We know that Xi Jinping’s wife, in her recent visit to Spain, was visiting the Royal Theater with the queen with all the protocol with which a first lady is received.”

Meanwhile, Gomez added that there has always been pressure from the Chinese Embassy to cancel the shows around the world.

“[This interference] happens practically in every city that Shen Yun visits,” she said.

For more than a decade, while Shen Yun tours the globe, it is not uncommon for the CCP to pressure Western theaters not to lease their space to the performing arts company or pressure them to cancel their shows. The communist regime has even sought to coerce Western government officials not to attend the performances or voice support for the company.

Moreover, the CCP uses front groups, who gather outside the theaters around the world to hold up placards with propaganda slogans and hate speech, to disrupt theatergoers while Shen Yun is performing. The most recent example of this was at the Lincoln Center in New York.

The CCP has tried similar tactics in the past to interfere with Shen Yun performances. In 2014, Chinese diplomats in Barcelona attempted to force the National Theatre of Catalonia to cancel the performances.

According to El Mundo, the second most widely distributed newspaper in Spain, Chinese Consulate officials assailed the theater, and then the Spanish Foreign Ministry.

The regime’s representatives went in person to the theater and demanded that the show be canceled because it “went against the interests of the Chinese Communist Party.” When visiting senior officials at the Foreign Ministry, the representatives warned that the failure to shut down the cultural performance “may compromise” relations between Spain and China, “subliminally pointed to China’s investments in our country and exports of Spanish products,” El Mundo reported.

More recently in 2017, CCP front groups staged a protest in front of the Liceu Theater in Barcelona while Shen Yun was performing inside. Around 25 to 30 Chinese nationals carried banners and shouted slogans that defamed Shen Yun and Falun Gong, a Chinese spiritual discipline practiced by Shen Yun performers. The adherents of this spiritual practice in Spain have launched a defamation lawsuit against the CCP front group.

Like Spain, many theaters and lawmakers around the world have experienced similar pressure from CCP representatives, including those in Holland, Denmark, Australia, and the United States.

Why Is the CCP so Afraid of Shen Yun?

Since 1999, over 4,000 Falun Gong adherents are confirmed to have died as a result of the persecution, though the actual number is likely much higher, given the difficulty of getting sensitive information out of China. The Chinese regime has also strategically spread anti-Falun Gong propaganda domestically and beyond its borders—through pro-Beijing or Party-affiliated Chinese media, and front groups embedded in overseas Chinese communities.

Shen Yun performances include pieces that portray today’s real-life human rights abuses in China like the persecution of Falun Gong and depicts Chinese civilization as divinely inspired, which has irked the officially atheist communist regime. As a result, the CCP has repeatedly tried to hinder Shen Yun performances using various tactics since its inception, according to the company’s website.

Explainer: How Enhanced Child Tax Credit Will Affect Your Taxes
0