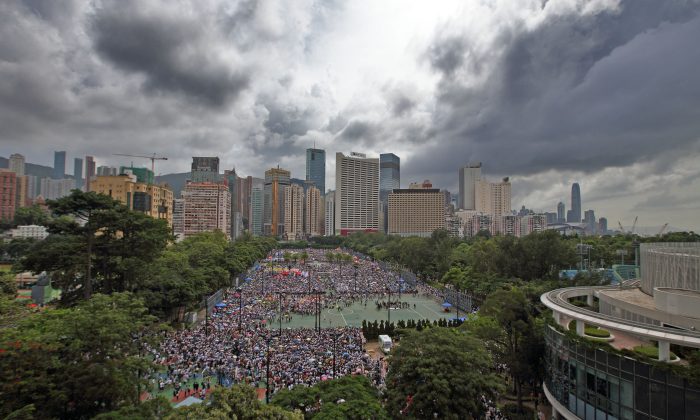 People flock to Victoria Park to join the July 1, 2014, march to protest against the communist regime. (Poon/Epoch Times)
China

On Aug. 31, the National People’s Congress Standing Committee (NPCSC) in China voted on the method for selecting Hong Kong’s next Chief Executive in 2017. They ruled that the city-state will be granted universal suffrage, but the candidates must be selected by a Beijing-controlled nominating committee and the number of candidates will be limited to 2 or 3.

Tung said that the method is real democracy because it allows one vote per person. He added that the NPCSC’s decision is not the final draft, and Hong Kong’s democratic system could improve further after 2017.

Tung expects Hong Kong to reform gradually, step by step, based on the current political reform plan until it finally achieves true universal suffrage. In other words, he is putting hope in the CCP and fantasizing that it will change.

In fact, the CCP has no intention and no ability to carry out any real reform. It has completely lost people’s trust and is powerless to salvage or improve itself.

As a dictatorship, it is only natural that the CCP would ban genuine universal suffrage in Hong Kong. The CCP is trying to appoint a Party-loving candidate to serve as Hong Kong’s chief executive, and then it can implement its dictatorship in Hong Kong.

This reveals the political lies hidden behind the CCP’s promise many years ago that Hong Kong would have autonomy from China under the policy of “one-country, two-systems.”

Protests on the Rise

After the NPCSC’s decision, a rally was held in Hong Kong that evening to protest. The rally organizer announced that there would be a series of civil disobedience events in the future.

Benny Tai Yiu-ting, co-organizer of the Occupy Central movement for universal suffrage, stated that Hong Kong has entered an era of civil disobedience.

The Hong Kong Federation of Students (HKFS) is planning a week-long college students’ strike later this month. On Sept. 4, the Student Union of the University of Hong Kong issued a statement calling on all students to take to the streets and protest the political reform plan.

The statement said that the strike is the last warning to the authorities, and the civil disobedience campaign is on. By Sept. 8, students from 17 colleges and universities had agreed to join the strike.

Joshua Wong Chi-fung, convener of the student activist group Scholarism, announced he will organize high school students to boycott class in the next two months. The Civil Human Rights Front has launched a yellow ribbon campaign to express their dissatisfaction, calling on the public to join them in civil noncompliance.

Hong Kong people are handling the blow with rational and mature behavior, and this is precisely what makes the CCP nervous. The more peaceful and rational Hong Kongers’ protests are, the more brutal and absurd the CCP looks.

Hong Kong’s free and independent system enables its people to protest against the CCP at all levels—political, economic, social, legal, educational, cultural, and through media.

A younger man is calling on people to take action—civil disobedience to fight against injustice. (Suen Chingtien/Epoch Times)

The civil disobedience campaign may set off a sense of revolution in Hong Kong society and a complete rejection of communism.

Twenty-five democratic Legislative Council (LegCo) members have promised to veto the reform package put forward by the Hong Kong government in accordance with the NPCSC’s decision. If they all keep their promises, there will be enough votes to reject the final reform package in the LegCo.

If it is rejected, Hong Kongers and the Chinese regime will be in a political standoff.

The CCP controls the mainland Chinese population of 1.3 billion, but it cannot do much with the 7 million people in Hong Kong. This will put the CCP in a very awkward position.

The CCP faces the dilemma of how to deal with the Occupy Central movement. It is also at a loss for how to effectively manage Hong Kong long-term to ensure Hong Kong’s prosperity.

NPCSC deputy secretary Li Fei said in a press conference that if Hong Kong’s chief executive confronted the central Beijing government, the “one country, two systems” policy would fall through. That is, the CCP would take control of Hong Kong.

However, no matter what happens due to the confrontation between Hong Kong and the CCP, it would inspire mainland Chinese people to think about this question: How can we Hong-Kongize the mainland?

To “Hong-Kongize the mainland” would be to set up a free system in mainland China, a true independent judiciary system. It would mean protecting all types of human rights, including freedom of belief.

How can it be done? History has supplied the answer: civil disobedience.

Hong Kongers are now establishing a model, and mainland Chinese people will need to interpret the “civil disobedience” spirit in their own way.

When citizens reach a certain degree of tacit agreement and form a social resonance phenomenon in a large area, the CCP will exit the stage of history.

Overseas Hongkongers rally in Trafalgar Square in central London on July 1, 2014, to support the protest march in Hong Kong. Two young ladies hold banners, the left one reads ‘the hope is from people, the change is from protest’; the right one reads ‘I can’t keep calm because Hong Kong is dying’. (Li Jingheng/Epoch Times)

People in China do not trust the CCP anymore. Its crimes throughout history have shown again and again that all of its rhetoric and behavior are to serve its own interests, gain power, and accumulate wealth.

More and more Chinese people have now realized that China and the CCP are not the same thing. If the CCP is not abandoned, reforms will bring no benefit to China or Hong Kong and will not change the injustice in the social structure or the current situation.

U.S.-based China affairs expert Liao Shiming said it is impossible that the CCP will change, and anyone who stands on the side of the CCP will suffer its tragic end. He added that those who make the right decision now will be remembered, while those who support the NPCSC’s decision are helping the CCP and ignoring public opinion.

Translated by Michelle Tsun and Susan Wang. Written in English by Sally Appert.