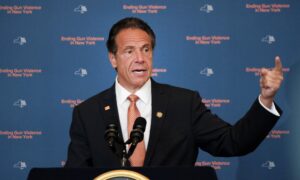 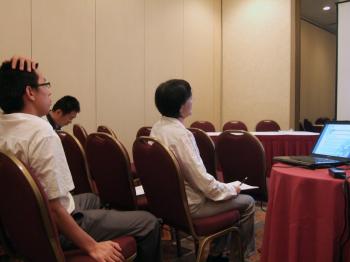 Cheng Ningning (right), Wang Wenzhong (center), along with a Washington DC Chinese Consulate employee (left) appeared at the ICSA conference on July 1. (The Epoch Times)
US

By Chen Shu and Xu Zhusi
biggersmaller
Print
FORT LEE, NJ—For years Chinese Communist Party (CCP) officials have tried to use the meetings of an association devoted to helping cult members as a platform to attack Falun Gong, but have been rebuffed. On the July 4 weekend, three CCP officials tried once again to do so.

The International Cultic Studies Association (ICSA) aims to research cults and to help members of cults who have been harmed. During the 2010 ICSA annual conference held in Fort Lee, New Jersey, three CCP officials who presented themselves as experts gave a “research report” on the “caring, transforming, and educating of cultic members in China.”

The three CCP officials are in fact directly involved in the persecution of Falun Gong practitioners. They are Cheng Ningning, deputy secretary-general of the China Anti-Cult Association; Wang Wenzhong, a psychologist; and Chen Qingping a specialist from the 610 Office under the Shaanxi Province Communist Party Central Committee. The 610 Office was established by then-CCP head Jiang Zemin on June 10, 1999 for the purpose of eradicating Falun Gong.

According to Michael Langone, ICSA executive director, these CCP officials have routinely submitted abstracts of papers to the conference as researchers and psychologists. In past years, their submissions were rejected due to their having Falun Gong content. However, this year there was no mention of Falun Gong in the paper’s abstract. Instead the term “cults in China” was used, and they were granted permission to speak during the conference.

When asked about the subject of her research, Cheng struggled to answer and eventually replied “I don’t know.” When again asked if the subjects were Falun Gong practitioners, Cheng responded with a tacit affirmative.

When Mr. Langone asked them what other “Chinese cults” they are researching and the status of the cults, none of them could provide an answer. Wang admitted that since 2000 he has been exclusively involved in Falun Gong “research.”

After the conference, Mr. Langone told an Epoch Times reporter: “When we got these proposals, we had rejected them in the past … The proposals [for this conference] were to talk about treating cult members and I would expect China to have many cults, just like we do and Europe does. What I wanted to hear was about other groups. I didn't want to hear about Falun Gong …”

“We learned a lesson here. They admitted that they're talking about Falun Gong. This is not what we wanted to hear. We were looking for other groups. I'm very disappointed because I've had some dealings with these people. What's sad about this is that the authoritarian system in China constrains me."

One of the ICSA committee members Mr. Mike Kropveld told the reporter, "When there is bad research [like this] in conferences, it is so obvious, everyone can see that. We all know about the oppression of Falun Gong by the Chinese government. We do not agree with it.”

Mr. Kropveld also said that he believes there will not be another chance for these CCP officials to attend an ICSA conference.