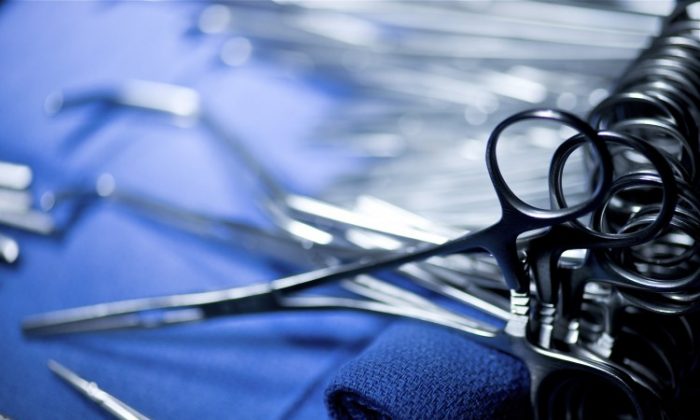 Clamps, scissors and other surgical instruments used in the operating room during a kidney transplant. Beijing has officially acknowledged the existence of live organ harvesting in China. (Brendan Smialowski/AFP/Getty Images)
Opinion

The atrocity has been in plain sight for years, while the Chinese regime has tried to deny it, explain it, or find someone to pin the blame on—anything so long as the Chinese Communist Party (CCP) could continue unscathed.

After 1999, the year the persecution of Falun Gong began, organ transplants increased significantly in a just a few short years, reaching 10,000 transplantations per year in a country without an organ-donation system.

For years, the international community, especially human rights groups, criticized China for using executed prisoners as the organ donors. The Chinese regime bluntly denied the accusation but didn’t give any explanation of where the organs came from.

In July 2005, during the International Liver Transplantation Conference, Huang Jiefu, the vice minister for Public Health in China, admitted that most of the organs for the transplants were from executed prisoners. That was the first time a Chinese official had admitted that. Huang reiterated his position at another international conference in Manila in November 2005.

This announcement couldn’t have been decided at the Ministry level. Perhaps someone at the top knew about the forced, live organ harvesting from Falun Gong practitioners and wanted to provide an explanation before the source of the organs was exposed. Or perhaps the Party simply felt pressure before the international community to explain where the organs for 10,000 operations were coming from.

But the regime also faced criticism on other fronts. The number of executions each year was itself criticized as a human rights violation.

That’s probably why at a press conference on April 10, 2006, Mao Qun’an, the spokesperson of the Ministry of Public Health, denied the acknowledgment by his direct boss, Huang Jiefu, that executed prisoners were the source of the organs.

Mao’s story was that most of the organs were voluntarily donated by Chinese citizens when they were alive, with only a very few organs from death-penalty criminals who had voluntarily signed a consent form.

The denial lasted for only seven months. On Nov. 18, the English-language China Daily reported that Huang Jiefu admitted once again that most organs for transplants were from executed prisoners.

The regime has stuck to this statement ever since. It looks like someone at the top finally decided that the organs-from-executed-prisoners story was a better choice than the organs-from-non-existent-donors story.

The change in stories was obviously related to the exposure of the forced, live organ harvesting in March 2006, a story broken by The Epoch Times. The regime was forced to retreat one step and made the slightly more plausible claim that executed prisoners were the main organ source.

Since the July 2006 publication of the groundbreaking investigative report Bloody Harvest, by David Kilgour and David Matas, the Chinese regime mostly kept silent on the issue, other than saying that China prohibits the sale of human organs without written consent.

However, this year, in the middle of the Wang Lijun-Bo Xilai scandal, the regime made a couple of strange moves that brought the regime one step closer to disclosing the source of the organs used in the 10,000 transplantation operations.

On Aug. 4, 2012, the Ministry of Public Security announced that the police had busted 28 organ trafficking gangs. On Sept. 9, Caixing Magazine published an article describing in detail the trial of one of these cases.

This report claimed that a criminal named Zheng Wei had organized a network. Zheng’s network searched for a potential organ donor who wanted to sell one of his own kidneys, set up the facility for harvesting the organ, got the forged legal documents from the court, including the fake or real execution certificate and signed consent forms, and transported the organ.

The kidneys finally turned up in the operating room of a most prominent hospital, the 304 Hospital of the People’s Liberation Army (PLA), which is the First Affiliated Hospital of the General Hospital of the PLA, also known as the 301 Hospital. All Chinese leaders are treated in this hospital.

For a regular criminal, a member of a street gang, creating a sophisticated organ transplant system by himself would be almost impossible.

According to the prosecutor, Zheng has only been involved in the illegal organ harvesting business for three years. Obviously, he doesn’t have the knowledge, the power, or the connections to establish this kind of organ-supply system.

Zheng was just filling a hole in the existing system. Three years ago, Zheng Wei met the top transplant surgeon in the 304 Hospital. The surgeon complained to him that he couldn’t meet the quota that the hospital assigned to him due to a lack of organs. The quota is usually set according to the previous year’s production.

Six or Seven years ago, specialized organ transplantation centers and hospitals filled the Internet with their advertisements. Many promised a waiting time as short as two to four weeks. It seemed that there were unlimited organ supplies in China at the time.

If Zheng Wei started his business in 2009, then a shortage of organs for transplantation had already become an issue at that time.

The only explanation for the shortage of organs is that after the exposure of organ harvesting from Falun Gong practitioners, the regime or someone in the top leadership tried to reduce or stop getting organs from Falun Gong practitioners, at least in places that could be easily investigated and exposed. The once seemingly endless organ supply chain was broken, leaving a gap for common criminals to fill.

The article by Caixing could be considered a response to the question the regime has never formally answered: Where did the organs come from? The case of Zheng Wei admitted the existence of organ trafficking, the involvement of a military hospital, and other illegal activities that the regime had previously denied. This was another step toward disclosure.

On Sept. 28, the regime mouthpiece Xinhua News Agency announced that the disgraced former Politburo member Bo Xilai would be stripped of his Party membership and tried in a criminal court for “serious crimes.”

That same day, two of the most popular microblog sites in China, Sino and Tencent, quietly lifted censorship on the word for “live harvesting,” or huozhai in Chinese. This word has in the past several years especially referred to harvesting organs from living Falun Gong practitioners.

Previously, during the Wang Lijun-Bo Xilai scandal, Baidu and Weibo had lifted the censorship of some “sensitive” words several times. Those words were carefully selected, including “June 4” (referring to the Tiananmen Square Massacre) and False Fire (an award-winning documentary that debunked the claim that Falun Gong practitioners had immolated themselves on Tiananmen Square on Jan. 23, 2001).

But in these cases, the lifting of the censorship didn’t last a long time, as it did after Sept. 28.

Selectively lifting the censored words is an easy way to send a message. Instead of giving people full access to information, lifting some censored words lets people in China see the search results without being able to read the content.

Several days ago, Boxun, a Chinese-language news website based outside China, quoted a source in Beijing as saying that “the crime of live organ harvesting that Falun Gong practitioners have raised is more or less true.”

According to Boxun’s source, the crime took place under the shield of the Political and Legal Affairs Committee and was carried out by Gu Kailai, Bo’s wife. Both Radio France International and Hong Kong’s Apple Daily reprinted this news, even though it has not been verified by other sources.

The source also claimed that after the Bo Xilai scandal was brought to light, Jiang Zemin criticized Bo for “crimes against humanity” and “breaking through the bottom line of humanity.”

Jiang Zemin initiated the persecution of Falun Gong. He himself is guilty of crimes against humanity and is responsible for organ harvesting.

When the regime realized the atrocities couldn’t be hidden, it sought to manufacture explanations: The organs came from executed prisoners. No, wait, organized crime is involved in organ trafficking.

At the same time, those inside the leadership who want to stop the organ harvesting have released information, making those responsible more and more uncomfortable.

Now Jiang Zemin and perhaps others are seeking to find a scapegoat to blame. If the exposure of the atrocity is inevitable, then it needs to be quickly dumped on one knave’s head. Bo Xilai seems to have drawn the short straw.

All the while, the communist regime as a whole does damage control, seeking with excuses or leaks or scapegoats just to keep the CCP going. It is all a house of cards and is starting to totter.