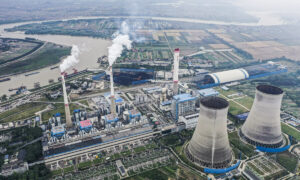 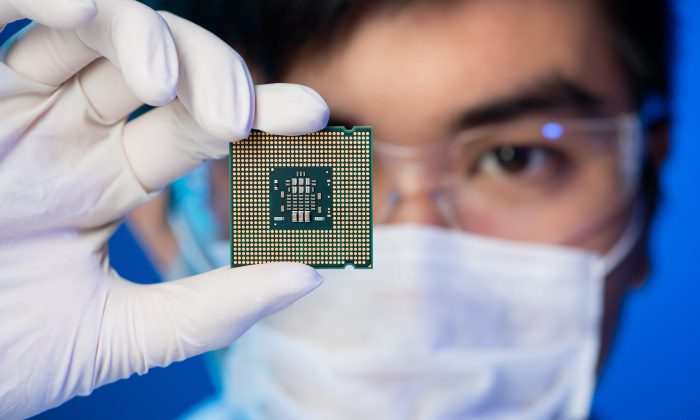 China is the world’s biggest thief of intellectual property, with 87 percent of all counterfeit goods that enter the United States coming from China. (Dragon Images/Shutterstock)
US-China Relations

Theft of intellectual property, the forced transfer of technology, and the purchase of distressed companies are helping build China's semiconductor industry
By Frank Fang

At the heart of the modern economy is the semiconductor, and the United States is the world leader in producing the tiny microchips. Now China is seeking by fair means and foul to challenge America’s preeminence.

A courtroom in San Jose, California, is the latest battleground in this ongoing industrial war. On Nov. 30, four former engineers at Applied Materials Inc., an American firm that supplies equipment and software for manufacturing semiconductor chips, were indicted for stealing chip designs from the company and attempting to use them to set up a Chinese startup, according to Bloomberg.

They were arraigned on Dec. 15, and if convicted, could face up to 10 years in federal prison.

Chips power everything from electronic gadgets like cellphones and computers, to military weapons like ballistic missiles and satellites. The demand for chips with high computing power has only increased with the need to support fast-growing tech industries, such as cloud computing and cryptocurrencies like bitcoin.

Chips are made by turning wafers of silicon substrate into integrated circuits. Manufacturing the current generation of more powerful chips requires high-tech processes that are highly guarded secrets of companies such as Intel, IBM, Taiwan Semiconductor Manufacturing Company, and Samsung.

One of the covert techniques is to subject U.S. tech companies operating in China to security reviews.

The report warned of China’s “zero-sum” activities to advance its own semiconductor industry, including stealing intellectual property both “covertly and overtly.” One of the covert techniques is to subject U.S. tech companies operating in China to security reviews, which the report says can be used to “gain access to detailed knowledge of semiconductor technologies.” Another Chinese tactic is forcing the transfer of technology in exchange for access to the Chinese market, according to the report.

Last but not least, the report pointed out that Chinese companies, with the state’s funding, collude to lower the value of foreign companies that they wish to acquire, using tactical business decisions, before buying those companies when their stock prices plummet.

These tactics are part of a long-standing Chinese regime strategy of stealing intellectual property. According to a 2017 report by the Commission on the Theft of American Intellectual Property, China is still the world’s biggest thief of intellectual property, with 87 percent of all counterfeit goods that enter the United States coming from China.

China currently lags behind the United States and many other countries in manufacturing more advanced chips. Its semiconductor foundries are still 1 1/2 generations behind the most cutting-edge processing technology.

Yet, as the report points out, China plans to be at an “advanced world-level [semiconductor capability] in all major segments of the industry by 2030.”

Currently, the country lacks tier-one semiconductor equipment firms, which are companies that supply equipment directly to equipment manufacturers, but it does have a tier-two company called Advanced Micro-Fabrication Equipment Inc. (AMEC).

The report failed to mention how AMEC came to be in the first place. The company’s founder and CEO, Gerald Zhiyao Yin, who earned a doctorate in physical chemistry from the University of California–Los Angeles, used to be the senior vice president of Applied Materials, in charge of the company’s plasma etching department.

Yin contributed 86 patents while working at Applied, according to a Dec. 6 report by China’s news portal Tencent. He later quit his job and returned to China, taking with him a group of more than 30 senior engineers to establish AMEC. Today, the company’s main products are ion etching machines and MOCVD systems. Both devices are essential for chip production.

According to multiple Chinese media reports, Yin once gave the following as his reason for coming to the United States: “I have only studied so far so that one day I might return to my motherland, to allow Chinese chips to have a place in the world.”

AMEC was able to manufacture advanced etching machines as early as 2008, a move that resulted in patent lawsuits from Applied Materials and Lam Research Corp., a supplier of semiconductor processing equipment headquartered in Fremont, California. According to the online electronics industry magazine EE Times, in January 2010, AMEC and Applied Materials settled all litigation, following a lawsuit filed by Applied accusing AMEC of misappropriation of trade secrets. Lam’s case was dismissed.

In January 2011, a Chinese court rejected Lam’s appeal of a January 2009 lower court decision that had dismissed a patent infringement lawsuit regarding one of AMEC’s etching machines. Chinese courts are notorious for protecting Chinese companies.

Today’s chips are getting smaller and smaller in size. One reason for this is the shrinking size of electronic gadgets. Another is the need for greater computing power; smaller chips come with greater power and efficiency.

In June, IBM, in partnership with Samsung and GlobalFoundries, announced that it had developed a process for building 5-nanometer chips. According to IBM, these latest chips will be 40 percent faster than today’s chips. If running at the same speed as today’s chips, the new chips will save 75 percent in power.

Just a few months earlier, in April, AMEC announced its own breakthroughs in the 5-nanometer chip production process, with plans to roll out a new 5-nanometer etching tool by the end of this year.

On Dec. 11, AMEC scored another court victory, according to DigiTimes, a newspaper focused on the IT industry and headquartered in Taipei. A high court in China’s Fujian Province ordered an injunction against a subsidiary of Veeco, a maker of semiconductor process equipment based in New York and operating in Shanghai. The injunction halted the company from importing, manufacturing, and selling three models of its MOCVD sets, thus barring a key product of an AMEC competitor from the Chinese market.

Correction:
A previous version of this article misstated the date when four former engineers at Applied Materials Inc. were indicted for stealing chip designs. The date was Nov. 30, 2017. The Epoch Times regrets the error.