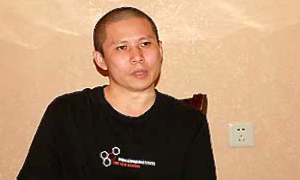 Shortly before the Chinese Communist Party’s elite were to gather in Beijing to discuss the Party’s agenda for the next decade, the Central Propaganda Department sent out an order that journalists should increase their efforts to understand the situation of “special intellectuals.”

In plain English, journalists were being given a warning, the latest in a series stretching back to mid-August, not to imitate “special intellectuals.” These are individuals who make the mistake of publicly criticizing the CCP or advocating for such ideas as constitutionalism or the rule of law.

In a story published on Nov. 4, Radio France Internationale (RFI) reported this order, as well as one directing Party members to “put into practice the spirit of the national propaganda and ideological work meeting,” referring to a conclave at which paramount leader Xi Jinping had laid out the need to take seriously the battle of ideas in China.

In the sensitive time just prior to the convening of the Third Plenum of the 18th Central Committee, the Propaganda Department was putting all on notice. Publishing thoughts paramount leader Xi Jinping had identified as a mortal threat to the CCP would not be tolerated.

Xi had made the case for the dangers of unapproved thoughts in a speech given on Aug. 19 in Beijing.

Various versions of the Xi Jinping’s speech were made available at different times, with earlier versions less intense and combative than later ones. In the version Hong Kong’s Apple Daily reports Party members were given to study, Xi stressed that taking control of the Internet is vital to the Party’s hold on power.

“Media including newspapers, forums, conferences, movies, TV, radio stations, and theaters must not provide platforms for those who maliciously attack the Party’s leadership and the socialist system, distort the history of the Party and the country, or create troubles by spreading rumors,” Xi said. “Nor can any digital media, mobile TV, mobile media, mobile texting, microblog, blog, or other social media facilitate it.”

“You must dare to make arrests and intervene, and dare to show your swords,” Xi added. He also encouraged Party members to “launch a ‘public opinion struggle’ in a rational, advantageous, and restrained manner.”

According to Deutsche Welle, on Aug. 19 Xi interrupted a presentation by propaganda chief Liu Yunshan, saying, “There are a small number of reactionary intellectuals who, using the Internet, tell rumors, assault, or denigrate the Party’s leadership, the socialist system, and state power, and they must be seriously clamped down upon.”

The clamping down started that same day. An Internet celebrity known by his online name as Qin Huohuo and another blogger were arrested on Aug. 19.

A flurry of editorials trumpeting the “public opinion struggle” and the need to “show your swords” also appeared on Chinese media after Aug. 19.

On Sept. 9, the Supreme People’s Court and Supreme People’s Procuratorate issued a judicial interpretation stipulating that people will face defamation charges if rumors they post online were shared or viewed more than 500 times.

On Sept. 15, CCTV broadcast an influential blogger who advocated for constitutionalism in China, the Chinese-American Charles Xu, as confessing to have visited prostitutes, in a report critics called a Cultural Revolution-style humiliation.

In mid-October Xia Yeliang, a professor of economics and a prominent advocate of political reform, was dismissed by Peking University.

Along with the hammers of detention, dismissal, or humiliation, Party members have also been urged to try softer measures.

Education Minister Yuan Guiren wrote in a Sept. 18 article in the Party mouthpiece People’s Daily, “Propaganda departments should strengthen contacts with intellectuals, make friends with them, and rally them around the Party to the greatest extent.”

When Xi Jinping first took power, there were widespread hopes he might bring real political reform to China.

An internal memo called Central Document No. 9, which was issued by the Central Party Office in April, showed Xi Jinping having a different agenda. The document urges the Party to root out seven perils, including Western constitutional democracy, universal values, press freedom, civil society, and citizen’s rights.

The campaign of “public opinion struggle” launched on Aug. 19 has further chastened any hopes for political reforms.

According to political and economic commentator He Qinglian, when Xi Jinping was the vice chairman of the Party, he was praised by state media as being tolerant and open-minded. He is quoted as having said, “There won’t be any excitement if you remove the noisy birds from the cage.”

“But now Xi tries to remove all those birds that don’t follow his order to chirp, and what’s left are parrots that please his ears by singing the praises of him and the Party,” Ms. He told RFI.

“This proves that Xi lacks political vision,” Ms. He added, “His ability, vision, as well as the measures he takes will not lead China to a bright future, and it will only get worse.”