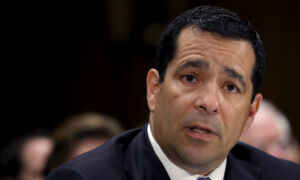 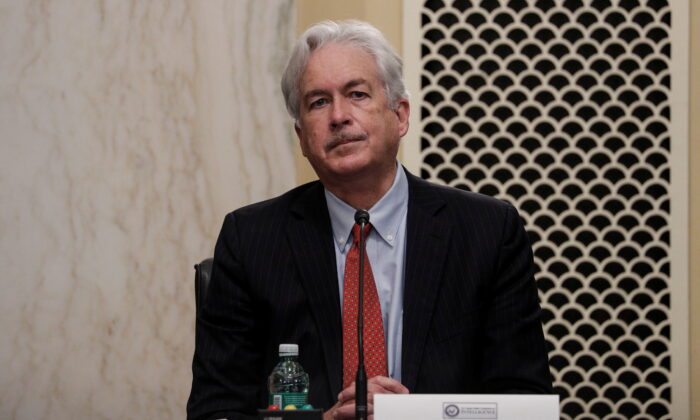 William Burns is seated to testify before a Senate Intelligence Committee hearing on his nomination to be director of the Central Intelligence Agency on Capitol Hill in Washington on Feb. 24, 2021. (Reuters/Tom Brenner/Pool)
Executive Branch

Burns, 64, a former career diplomat who has worked in both Democratic and Republican administrations, said his four top priorities if he is confirmed to head the agency will be “China, technology, people, and partnerships.”

“Out-competing China will be key to our national security in the decades ahead,” Burns said at a Senate Intelligence Committee hearing, repeating the position used by the Biden administration to describe its approach to the Chinese regime.

He called the regime a “formidable, authoritarian adversary” that was “methodically strengthening its capabilities to steal intellectual property, repress its own people, bully its neighbors, expand its global reach, and build influence in American society.”

However, Burns also noted areas in which the United States had “mutual interests” to work with the regime, such as climate change and nuclear non-proliferation.

Biden has indicated he would focus on “extreme competition” with the Chinese regime, although the administration has shed little light on concrete plans pending a review of Trump-era China policies. The administration also faces pressure from Congress to continue a hardline stance toward the regime, an area that enjoys bipartisan support.

The nominee also faced questions from Sen. Marco Rubio (R-Fla.), vice chairman of the committee, about his time as president of Carnegie Endowment for International Peace, which recently came under scrutiny over the think tank’s ties to China–United States Exchange Foundation (CUSEF), a body affiliated with the Chinese Communist Party’s influence operations.

Burns said he inherited this relationship with CUSEF when he became president in 2015, but cut off ties “not long after … because we were increasingly worried about the expansion of Chinese influence operations.”

He also defended the think tank’s partnership with Beijing-based Tsinghua University through the Carnegie-Tsinghua Center. Some of the Chinese scholars who worked for the center also have ties to the CCP, according to The National Pulse.

Burns said that during his tenure, he was “extraordinarily careful” to ensure that the arrangements with Tsinghua University allowed the think tank to do independent work.

“I’ve also made clear to my colleagues at Carnegie that the moment we were constrained and doing that independent work, we would cease operations,” he said.

Burns is expected to easily win confirmation to become director of the CIA. He has already been confirmed by the Senate five times for his positions as ambassador to Jordan and Russia and three senior positions at the State Department.