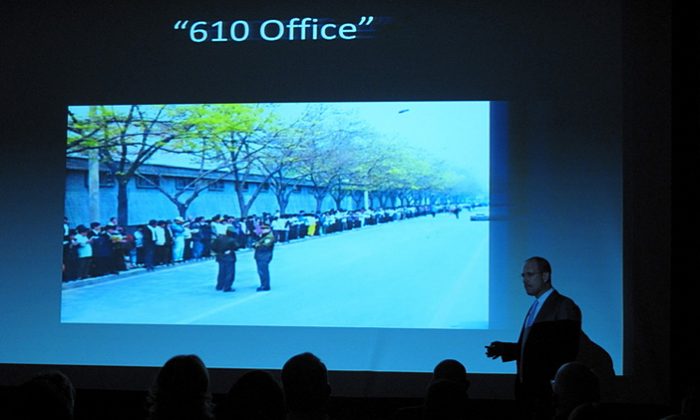 Greg Autry, China scholar and co-author for "Death by China," speaks to an audience. (The Epoch Times)
China

Events unfolding in China over the past several weeks have shaken the Chinese Communist Party (CCP).

After Wang Lijun, the former chief of the Public Security Bureau in Chongqing, traveled to the U.S. Consulate in the city of Chengdu on Feb. 6, there has been a domino effect of struggles for power and allegiance that threaten the very fabric of the communist regime.

On March 21, China expert and co-author of “Death by China,” Greg Autry, gave a speech at the University of California at Irvine, explaining the recent infighting among CCP leaders, and its impact on international society. The Epoch Times interviewed Autry before his speech.

Greg Autry: When you deal with [former Chongqing party boss] Bo Xilai, you’re dealing with an old fashioned thug; you are dealing with somebody at least you know where he stands, as the current leadership of China, Hu Jintao and Wen Jiabao, are such slippery characters. It’s good that we have a hard-liner such as Bo Xilai out of the way but it doesn’t give me any confidence that China is moving to a more democratic system—it just gives me confidence that their marketing will continue to be more appealing to the West.

I think the fact that there has even been discussion of an internal fight going on—a potential coup—makes it clear that this regime is a lot [more] unstable than most Americans, particularly American businessman and politicians, are aware of, and this is a risk that the U.S. needs to be aware of.

The fact that Bo Xilai has been removed makes it clear that there is an internal power struggle going on within the CCP, and that’s a good thing for American business people and politicians to be aware that this regime is not a stable regime for us to invest our political resources or capital into …

I don’t have any confidence that the removal of Bo indicates any step forward to democracy and human rights in China, I think it just means we’ll continue to have a regime that’s good at marketing itself to the U.S. and to other Western countries.

The Epoch Times: In the current situation, do you think democracy would change China for the better?

Mr. Autry: I don’t think what we’ve seen so far provides any indication that there is going to be positive change in China.

Obviously, the current leaders of China have been talking about progress, and speaking in euphemisms and warm sounding phrases, particularly when they speak to the West, but there is never any real progress. The crackdown on information flows on the Internet, on censorship, on religious practitioners, on Tibetans, continues unabated. I don’t have any reason to think we are going to see a change in that just because Bo is removed in Chongqing.

There might be a local change in that city, where we might see a little bit of a step back from the Mao-worship that was going on, but I don’t think China will see any change unless there is a real conflict that breaks out and threatens to throw over all the folks in [the Party’s leadership compound in Beijing] Zhongnanhai.

Epoch Times: What do you see as the role of the U.S. government?

One is an old fashioned Maoist dictatorship and the current regime is a pack of liars. So there is no reason to support either side. The U.S. needs to support the Chinese people and continue to be clear and transparent that we support human rights, [and] we support media freedom in China. Until that occurs we’re not really interested in how they fight with each other.

However, we need to be clear that this is an unstable regime, very much like the Soviet Union in 1990–1991, and for American politicians to invest American political strength in this current regime, or for business people to continue to invest capital, is risky business, and we should be aware of that and we should reconsider how dedicated we are to cooperating with the current Chinese government until stability returns.

I don’t think the U.S. government should do much except try to be a lot more truthful about the nature of the people we are dealing with currently, and the fact that there are opposing forces within their supposedly one-party system, and because they insist on having a one-party system there is no possible peaceful transfer of power from one group to another within China.

So clearly we are going to have, at some point, a nonpeaceful transfer of power and that’s not going to be good for the world economy. It may not be good for the Chinese people and it’s probably not good for American government to be invested in.

I don’t think the American government can take any concrete actions to affect this one way or the other, because again we can’t support either side in this situation until a new force rises in China like a Jasmine revolution, an Asian Spring, if you will. … There is not much the U.S. government can do except stop supporting the lies that come from the CCP [Chinese Communist Party].

Epoch Times: Some Chinese people want the U.S. government to expose whatever evidence Wang Lijun brought to the consulate.

Mr. Autry: I think it’ll be really interesting to know why Wang Lijun was in the embassy in Chengdu and I think it’s interesting the police in Chongqing pursued him all the way to Chengdu and some American people—even politicians and business people—are unaware of that going on.

That’s a scary thing: that’s not rule of law happening in that country. It would be great to know what he was doing in there. Was he really seeking asylum from the United States? Was he merely hiding from Bo, until the folks in Beijing came to rescue him so that he could turn evidence on Bo’s coup plan?

I don’t know, but I do think the American government should share what they know. I do know some members of the Congress pushed for the State Department to make that happen. I’m going to be in D.C. to testify to the Foreign Affairs Committee next week, and I’ll certainly pass it on to the members of Congress what I know. … I think they are going to be very interested in trying to get that information to both the American people and … to the Chinese people.

Mr. Autry: I would like to think that we would see the truth come out about Jiang Zemin’s rule, and his persecution of Falun Gong and establishment of the 610 office and all the other things that he did.

But on the other hand, the current regime doesn’t necessarily want to show what Hu Jintao has done to the Tibetans, or the persecution he’s continued since then. I think they’ll be a little bit cautious to let that information out, even if they want to use it to hurt their political rivals. But you never know, because the CCP is a black box full of rats that are fighting. It’s not a political system like any other in the world.

Epoch Times: Somebody said this might be the first step toward the collapse of CCP. What do you think?

Mr. Autry: I think it looks very much like the situation we saw in the Soviet Union in 1990–1991, where there were hard-liners trying to restore the hard line system. Gorbachev had begun to unlock a little bit, … When he couldn’t keep it locked up any more, the whole system fell apart in chaos.
I think it’s possible, but we don’t know because it’s a black box, because the CCP insists on having a one-party rule and not being transparent. The people in China don’t know what’s going on, and that’s an unfortunate situation.