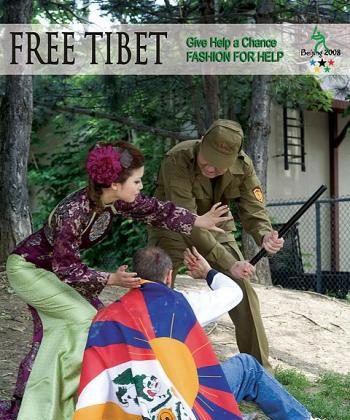 An event held outside the Chinese embassy in the Prague last Wednesday, showed striking photographs that contrasted beautiful fashions with the controversial human rights abuses of this year's Olympic Games host country.

The photographs show dramatized situations where beauty and brutality meet in frozen moments of great consequence. In one, a graceful Asian woman dressed in a green and purple silk gown assists a Tibetan protester who has fallen on the ground. With her other arm she tries to ward off the blows of a Chinese soldier armed with a truncheon, poised with his arms pulled back, like a baseball player ready to strike.

In another of the stylized photographs, the woman, now dressed in a red and gold silk gown, tries to hold back the arm of a surgeon who, with a large knife in his other hand, is removing organs from an apparently unconscious Falun Gong practitioner.

Other graphic photographs played on the same theme, grace and beauty warding off cruelty, capturing the most controversial abuses of the Chinese Communist regime. They are part of Czech fashion designer Marie Copps' latest collection named “Beauty and Horror” and part of  her larger campaign “Give help a chance – Fashion for help aimed on highlighting the human rights abuses of the Chinese communist regime.”

Though the photos are obviously dramatized, the situations they depict are painfully real,” says a press release of the event.

Representatives from Olympic Watch, Amnesty International and Lungta, were also outside the embassy at the display. They, along with Copps, awarded the Chinese Communist Party the “Medals of Red dragon,” for being the No. 1 human rights abuser.

Reporter: Do you think fashion can help change human rights in China?

Marie Copps: “I don’t have such an ambition, to change China solely by fashion. But people (especially women) like fashion so it’s a good way to express my concern. It’s a kind of connection of two disparate worlds – the world of fashion and the world of human rights. If you put them together, the result would be contrast – something people might feel as strange or unusual, but they would be able to feel it. And this can have an effect.

Reporter: Your art seems to depict the struggle of ancient Chinese culture with the present totalitarian regime?

Marie Copps: “I perceive it as message of traditional China, which I admire and love. Its 5,000 years of cultural development. If you take Taoism or Buddhism and put those beautiful elements of Chinese culture in contrast with evil, you will see the Communist regime as something alien, incoherent and inconsistent with China itself.”

Reporter: Do you see a need for the Chinese to discern between the Chinese culture and the culture set up by Chinese Communist Party?

Marie Copps:The Chinese regime is trying hard to eliminate all the substance of religions and original values. They left only the surface, but destroyed the inner meaning. Many Chinese don’t know their original ancient culture – it was denied to them. That’s the reason of moral degradation many Chinese people talk about.
The core of my project is a man, who decides to resist evil. Fashion is just a way of how to express it.

Katerina Jacques, Czech Member of Parliament for the Green Party

Reporter: What do you think about the unwillingness of the Chinese embassy to communicate or respond to any outside appeal?

Katerina Jacques: "As to myself, I have put into this mailbox several petitions and letters and I have been joining such gatherings for many years. This is a typical reaction of the regime; they behave like that all over the world. They don’t communicate, which is a brutality combined with cynicism, a strategy in which they roughly and harshly follow their self-interest, and they repeat the same mantra again and again. It’s an interesting contrast – other embassies hold cultural activities and forums; the Chinese embassy is perfectly cocooned. They neither allow discussion nor a successful dialogue."

Reporter: Why do you think that the Chinese embassy practices this “no-communication”?

Katerina Jacques: "Well, such behavior… you are actually asking me, why humanity battles with the evil. I can’t answer you so clearly, but I’m a defender of hope, that goodness and truth will win. Goodness in the end has to win in humanity. This situation I view as a temporary stage. To us, in our country [Czech Republic, a part of former Czechoslovakia, was occupied for forty years by the Soviet Communist regime] in 1985 we also thought that the terror will never end, and the change came four years later [when the U.S.S.R. collapsed]. I believe that the regime in China will finally fall."

Reporter: Do you think that the people should choose themselves, what they want?
Katerina Jacques: "It’s all about the active attitude, because passivity is the worst. We, who live in the free world, have a duty to point such things out and create continual pressure. When you see the motives of these pictures [Jacques points at the photographs by Marie Copps], one question is a freedom of press, and another thing is killing people. Once a human life or human health is at stake, any debate fails."

Yvetta Hlavacova, Czech swimmer, holder of the world record in swimming across the English Channel

Reporter: Sportsmen generally didn’t  make many comments about these kinds of  activities before the Olympics. Why did you decide to speak out?

Yvetta Hlavacova: "Because I am a free person. I have my own opinions and I’m not ashamed of them, nor am I afraid that I will have any problems. That’s also the reason why, in 1995, I renounced a membership in a prestige club sponsored by the Ministry of Interior Affairs; I wanted to say what I think. If anybody is not doing that, he is afraid of being different. This person doesn’t want to help and thinks only about himself. When a sportsman refuses to support such an activity, then it’s just obvious. I have nothing to add. What should I think of them? When everybody is afraid of something and doesn’t do what is right, we have such situation in which we are now."

Reporter:Pressure from sport organizations on sportsmen may play a certain role…
Yvetta Hlavacova: "If they can live with it, that they have a certain opinion and despite that they obey somebody who tells them not to speak… When they feel that they should speak, they should just do it and speak. I don’t think that any good sportsman would be negatively affected by it. He should go there, make some achievements, do his best and then say a clear opinion."

Yvetta Hlavacova: "Who else can do it, if not them? The sportsman fights since his childhood, he has willpower, courage and then, when it comes to this problem, he becomes scared? What courage are we talking about then? But… no money or fame is paid for it, so they just don’t come. Why they should come? They are not obliged to be interested in it. It’s happening in China, after all, and that is their thing, isn’t it? Such sportsmen are just thinking only about themselves."