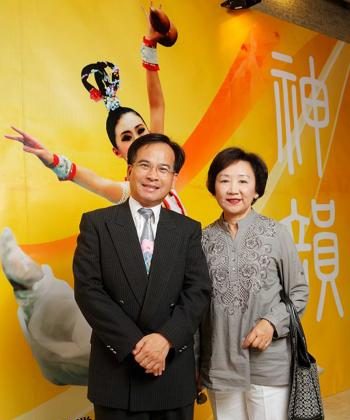 “All the local Chinese stores were closed and there was a welcoming committee organized up by the CCP to welcome Hu Jintao,” said Ms. Zhang, a demonstrator at the presidential palace. “We asked a Chinese man in the welcoming committee if he received any benefits for participating, and he replied that he did. At about 3:00 p.m., when Hu arrived, my friend and I were standing at the exit of a large tunnel and holding a banner which read “Falun Dafa Is Good.” CCP-hired thugs first tried to block our banner with theirs, and then one of them just grabbed our banner and ran away. They also threatened to take our camera if we tried to take pictures of them.”

“Each of us still had a small banner, so we displayed these as best we could and we shouted ‘Falun Dafa Is Good’ very loudly together. There were three CCP-hired thugs behind us, and one of them said, ‘You two do not shout anymore, I will buy you dinner if you stop shouting.’ We ignored him, and then they pushed us down over 20 steps. Fortunately, I fell on a pedestrian so I was not injured too much. However, my friend, Ms. Su, was wounded badly.  There was blood all over her body and on the ground; her arms and wrists were also injured.”

Although Zheng was injured, she still stayed there to protest. She said, “When we were practicing exercises quietly beside presidential palace, those thugs came over and yelled at us.  Even the police couldn’t stand them anymore and pushed them away,” Zheng continued.

“Those CCP-hired thugs attacked people in  public, but they couldn’t achieve their goal. On the contrary, their actions exposed themselves to the media.”