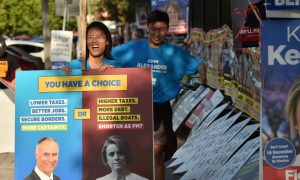 The annual Lunar New Year Parade is a celebration of Asian-American culture. It also celebrates the contributions made by Asian-Americans. However, a so-called anti-cult organization recently hired people to hold up Chinese flags behind police barricades along the parade route.

However, roughly 100 spectators along the barricades held up red China flags, seen as a symbol of the Chinese Communist Party’s (CCP) rule over China. The national flag was only adopted after the Party established the People’s Republic of China in 1949.

The flag holders did not appear to have a political agenda though. Most came for money.

When asked by undercover reporters with the Chinese-language Epoch Times, one of the flag holders replied thusly:

“Did they give you money?”

An organization closely tied to the CCP hired locals to hold up the flags.

At 11 a.m. at the start of the parade, Li Huahong, the head of a CCP front group known as the Chinese Anti-Cult World Alliance (CACWA), was observed instructing flag-bearers in the area to unfurl their flags. She also was seen ordering flag-bearers to stand in their designated area.

In the past, the CACWA has harassed and intimidated local adherents of Falun Gong, a spiritual group that is currently banned and heavily persecuted in mainland China.

Last year, the group had displayed Chinese flags during the parade, in breach of a rule stipulating that participants must only carry American flags. The group also put up banners bearing hate speech against Falun Gong on their float. They were disqualified from participating in the parade until 2020.

But the organization still found other ways to participate.

“Get over here. One person at one of these fences. You were told to stand here, you can’t just move around aimlessly.”

Flag bearers are instructed to say they’re only volunteers.

“If somebody comes to talk to you, don’t talk to them. What money? No money’s involved, we are all volunteers.”

“Can we get one those flags?”

“No, you have to register first. You can only get one if you have registered in advance.”

To reach quotas, some who appeared to be team leaders sought out spectators to join in. One team leader was caught giving a flag to an undercover reporter.

“Do you know each other?”

Others just came for the money.

“I don’t know, my sister asked me to come here?”

“Is there money involved?”

The organization had one objective.

“We are here to oppose Falun Gong.”

The presence of the flags upset many spectators.

“They can have lanterns, that’s Chinese tradition, and something joyful. This shouldn’t be here, this flag, it’s a form of influence.”

“They should investigate these people, see what their backgrounds are.”

After the parade, a man counted the flags and distributed cash payments.

A 2018 report by Washington think-tank the Hoover Institution raised concerns about CCP influence on Chinese-American communities, says that the Chinese regime’s focus on diaspora communities has intensified in recent years.

“Such activities not only interfere with freedom of speech within the United States but they also risk generating suspicion of Chinese Americans even though those who accept Beijing’s directives are a very small minority,” the report stated.