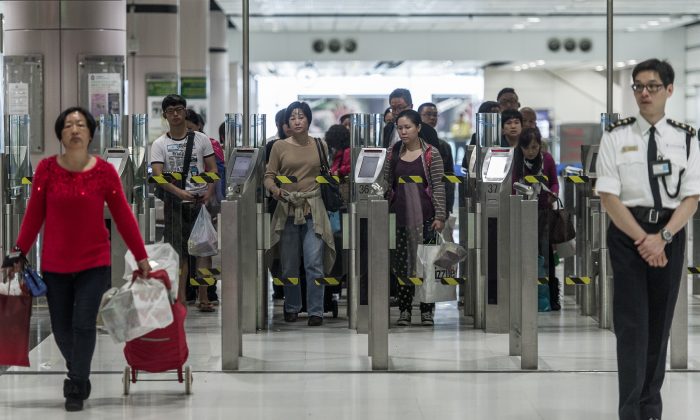 People proceed to an immigration checkpoint at a border crossing point of mainland China with Hong Kong on March 1, 2013. Hong Kong has no control over who immigrates to it from China. (Philippe Lopez/AFP/Getty Images)
Hong Kong

When the Chinese Communist Party (CCP) wants to strengthen its control over a particular area in China, it encourages large numbers of people who are loyal to the CCP to move to that area. This is known as “colonization,” and it seems to be happening to Hong Kong today.

Every political entity in the world has its own set of immigration policies. Even large cities in mainland China have the autonomy to approve their own immigrants and to receive newcomers according to their own needs.

However, some places in China do not have approval rights, because they are places the CCP wants to colonize. For example, when the CCP wanted to use immigration to control Tibet, they disregarded the will of Tibetans and encouraged large numbers of Han Chinese, the ethnic majority in China, to migrate to Tibet.

As the famous Tibetan writer Woeser pointed out, the CCP invited Han Chinese to change their ethnic origin to Tibetan and offered privileged dual domiciles to Han people. This was colonization disguised as autonomy. When the Dalai Lama asked that Tibet and China be separated as one-country-two-systems, this request was labeled as “Tibetan separatist.”

In Hong Kong, the Special Administrative Region (SAR) government has no approval right to grant One-way Permits (OWPs) to immigrants or to adjust the OWP quota. This means Hong Kong is unable to refuse criminal offenders such as Shi Jun-Long, who committed manslaughter and arson at the Immigration Department.

Sponsors of family reunions of non-Chinese immigrants must document the income of those invited, who are also subject to age restrictions. The sponsors also have to prove that they can provide appropriate accommodation for the reunions. Immigrants from China, however, are exempt from these conditions.

This shows that those coming to Hong Kong from China are part of the CCP’s colonization, and Hong Kong has no choice but to accept them.

In the case of the Yuanhua Group in 2006, it was revealed that the family of the smuggler Lai Changxing brought 58 people into Hong Kong by inventing a fake family reunion, falsifying documents, and saying they were family members and friends.

China revealed this deception in order to enforce repatriation of Lai Changxing to mainland China. Hong Kong would never otherwise have disclosed the falsification of these 58 OWPs or called it illegal immigration.

Such cases are only the tip of the iceberg. There have been many confessions about OWPs over the years, and it seems that government departments all over China have been randomly granting OWPs to relatives of the privileged class while the real family reunions are postponed.

Since the Immigration Department of Hong Kong has no approval rights, some new immigrants have no support in Hong Kong and no way to adapt to living there. They are living in poverty after losing their household registration in mainland China. The government cannot continue to support these cases endlessly. This has become a humanitarian calamity.

Colonization of Hong Kong is made even more unwelcome by the fact that there are two different legal systems practiced in China and Hong Kong, and it is impossible to combine the two in the foreseeable future.

This situation encourages new immigrants to hide their assets in mainland China while cashing in on the payments given to Hong Kong single parents in dire need.

These payments were originally only granted to permanent residents who lived in Hong Kong for up to seven years. However, according to a September press release by the Home Affairs Bureau, 27 percent of the new immigrant families who live under the poverty line receive these payments.

The new colonization policy has given rise to discontent in Hong Kong. The People’s Daily newspaper, a CCP mouthpiece, asks people in Hong Kong to be tolerant of “new Hong Kongers,” but this is merely a disguise for exercising discrimination against foreigners. In the end, the final decisions about immigration should be up to the people of Hong Kong.