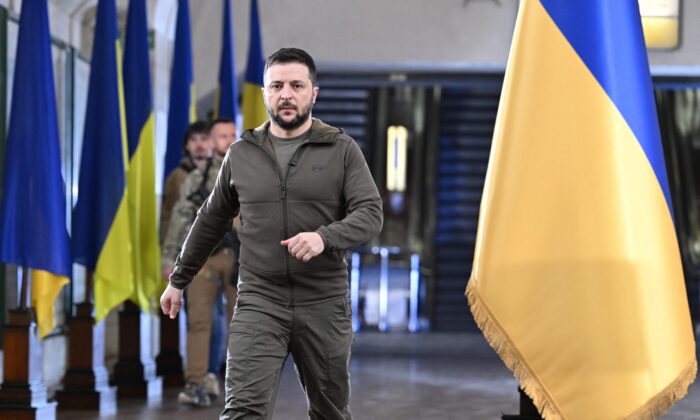 While the United States and the European Union continue to increase sanctions on Russia, the Chinese communist regime’s state media has recently changed its tone on the Russian–Ukrainian war, and is starting to report positively on Ukrainian President Volodymyr Zelenskyy.

Beijing is worried that if it’s sanctioned for supporting Russia, the Chinese economy may collapse, so minor adjustments have been made in the regime’s position, given China’s gloomy economic forecast as the ruling Chinese Communist Party’s (CCP) 20th National Congress is approaching, analysts say.

Previously, the Chinese regime had refused to use the term “invasion.” Since Russia’s invasion of Ukraine, the CCP has supported Russia and has been in tune with Moscow in its war propaganda.

Then, on May 5, many CCP state-run media, including CCTV, Global Network, and China Business News, reported positively on a speech by Zelenskyy. This was again markedly different from their previous portrayal of Zelenskyy as a clown and a comedian.

That followed the European Commission proposing a sixth round of sanctions against Russia, including its phasing out Russian oil imports within six months and removing Russia’s largest bank Sberbank from the SWIFT system on May 4. Meanwhile, U.S. President Joe Biden also indicated that he’s open to additional sanctions against Russia.

Discussions within the CCP have been quite intense recently around its 20th National Congress, especially given the deterioration of China’s economic situation, Feng Chongyi, an associate professor at the University of Technology, Sydney, told The Epoch Times.

If Beijing continues to support Russia in this situation, Feng said, the CCP will be subject to the same level of sanctions as Russia, and China’s economy will collapse, which would be unfavorable for Xi Jinping’s reelection to the 20th National Congress. So Xi must make some adjustments and take emergency measures, such as making concessions as demanded by Europe and the United States to declare Russian action against Ukraine as an “invasion.”

But at the same time, the regime will not give up on Russia.

“It may make some minor changes in its position, but not substantive changes,” Feng said. “It is just playing both sides, secretly supporting Russia and not daring to side with it in public.”

Another political commentator who follows U.S.–China affairs, Chen Pokong, said on his YouTube channel on May 3 that Chinese official media’s recent change in tone shows that Xi’s pro-Russian policy has suffered a major setback within the CCP, and that the regime is facing a choice between Russia and Ukraine.

“On one hand, the CCP already knew that Russia’s war on Ukraine is not going as planned,” he said. “On the other hand, Chinese state-owned enterprises and Chinese banks don’t support Russia because they don’t want to be sanctioned as well, so the regime’s pro-Russian policy could not be implemented.”

Sun Guo-Xiang, an associate professor at the Department of International Affairs and Business at Nanhua University in Taiwan, told The Epoch Times that the CCP won’t give up its support of Russia, especially amid an intensified U.S.–China strategic competition.

However, Russia has recently begun to question whether the CCP can really provide the assistance it needs, and has even expressed dissatisfaction.

Recently, Boris Titov, an economic adviser to Russian President Vladimir Putin, said in an exclusive interview with Sputnik that economic cooperation between China and Russia hasn’t been as good as expected.

Under the current circumstances, Russia shouldn’t rely solely on China for import substitution options, he warned.

Lin Cenxin, Luo Ya, and Xu Yiyang contributed to the report.