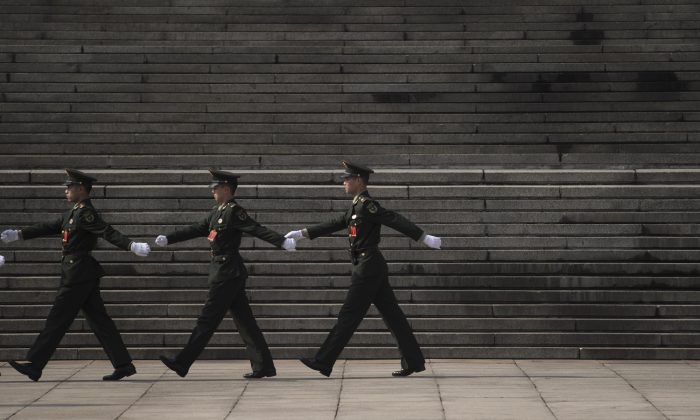 Chinese paramilitary guards walk in front of the Great Hall of the People during the 19th National Congress in Beijing on Oct. 19, 2017. (Fred Dufour/AFP/Getty Images)
Chinese Regime

For the first time, the Chinese regime under current leader Xi Jinping has explicitly called out members of a party faction for attempting to stage a coup against the leadership.

The announcement was made in the midst of the Chinese Communist Party’s (CCP) most politically important, and highly sensitive, event—the 19th National Congress, when the Party’s top leadership ushers in a new generation of ruling elite to run the country for the next five years.

Since Xi took power at the last party congress in 2012, he has been in a power struggle with an opposing faction in the Party. Known as the Jiang faction, they are still loyal to former CCP leader Jiang Zemin. Many of them have since been taken down under Xi’s sweeping anti-corruption campaign.

On Thursday, at a group meeting held at the 19th National Congress, China Securities Regulatory Commission chairman Liu Shiyu, without naming Jiang himself, said outright that former top Jiang faction officials had conspired to stage a coup. It is the first time the regime has openly accused them of such a severe crime.

However, this time, they are being directly condemned for usurping power.

“They had high positions and great power in the party, but they were hugely corrupt and plotted to usurp the party’s leadership and seize state power,” Liu told attendees of the meeting, according to a report by the South China Morning Post.

Though Xi is expected to continue his role as CCP leader for another five-year term, Liu’s comments—which almost certainly got the okay from Xi—is a tacit acknowledgment that the power struggle is still ongoing between the two factions, and that Jiang is the principal opposition force.

Even while the Party tries to convey an image of unity—demonstrated by the appearance of Xi shaking hands with Jiang and other party elders at the opening event of the congress—the leadership is trying to send a warning to the Jiang faction.

Xi has alluded to a coup in several speeches in the past. In 2015, he accused purged elite officials of forming “cliques and cabals” to “wreck and split” the Party.

China current affairs expert Ji Da noted that mainland Chinese media have yet to publish articles about Liu’s announcement, suggesting that Xi Jinping may have incurred resistance from forces in the Party still loyal to Jiang.

China affairs analyst Chen Simin observed that having Liu convey the message was an interesting choice. On the same day, the Central Commission for Discipline Inspection had held a press conference, but to have the CCP’s disciplinary body announce this would be too expected. Choosing Liu to raise the flag adds significance to the message, Chen said.

During a break-out session for delegates from Chongqing City, current Chongqing party chief Chen Min’er—who replaced Sun Zhengcai after he was recently ousted from the position—also told his audience that he was determined to rid the area of any remaining influence from Sun and Bo Xilai, the previous party chief.

Back in 2012, Bo Xilai and Zhou Yongkang were rumored to be involved in a plot to stop Xi from coming to power at the 18th National Congress—under instructions from Jiang.

But when Chongqing deputy mayor Wang Lijun attempted to defect to the United States, triggering media scrutiny and a political crisis, the plot was foiled.

Bo and Zhou were purged and put on trial soon after the incident.

Meanwhile, Sun was widely considered as Xi’s successor. But he had close ties to Jiang’s right-hand man, Zeng Qinghong.

Xi purged him several weeks ago ahead of the 19th National Congress, further ridding the Party of Jiang’s remaining influence.

Ling Jihua was a top aide to then-CCP leader Hu Jintao, and was investigated for taking billions of dollars while in power.

Meanwhile, Guo Boxiong and Xu Caihou held powerful positions in the military due to Jiang’s political patronage, and enabled Jiang to stay on as chairman of the Military Commission even after he stepped down as Party boss.