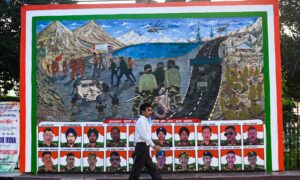 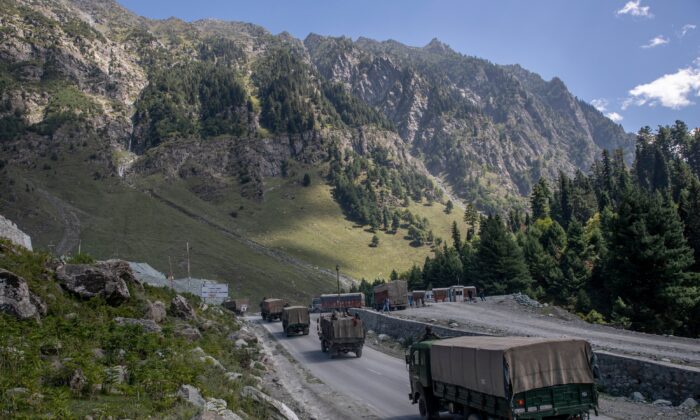 An Indian army convoy moves on the Srinagar-Ladakh highway at Gagangeer, northeast of Srinagar, in Indian-controlled Kashmir, India, on Sept. 9, 2020. (Dar Yasin/AP Photo)
Thinking About China

China’s Ministry of National Defense announced on Feb. 10 the withdrawal of troops from the Sino-Indian border. The next day, the Indian Defense Minister also confirmed the disengagement. It should be regarded as good news as China’s decision reduces the risk of military conflicts and maintains regional peace.

However, on Feb. 19, China’s state-run media suddenly launched a large-scale propaganda with regards to the Sino-Indian border conflict. On the one hand, the responsibility for the conflict was completely shifted to India, and on the other hand, the regime touted the victory and incited so-called patriotism.

On Feb. 19, the Chinese Communist Party (CCP)’s media was in full swing. The CCTV news program aired a recording of soldiers from both sides fighting in the Galwan Valley in Ladakh in June last year. The Chinese military, the People’s Liberation Army (PLA), published an article, titled, “The Heroes Stand Tall on Karakoram Mountains,” which was reposted by major Chinese media outlets. It was then followed by a commentary in the PLA’s official media, titled, “Sing the Heroic Song and Strive to Win the War.”

At the same time, state-run Xinhua News Agency issued a series of articles to promote nationalism.

These propaganda pieces portray that India’s unilateral aggression brought about the Sino-Indian border conflict, and the heroic PLA won with less men.

China’s Ministry of Foreign Affairs also joined this wave of propaganda. At a press conference on Feb. 19, spokesperson Hua Chunying made a high-profile statement, “The motherland will not forget them [soldiers], and the people will hold them dear to their hearts,” Xinhua reported. This familiar propaganda has always been used in all previous military conflicts with foreign countries. Politically, it is always a victory, a hero is recognized, and above all, it is the great glory of the Chinese Communist Party (CCP) leadership.

Xinhua published an article on the same day, stating, “Xi Jinping replied to the centenarian soldiers of the Shanghai New Fourth Army History Research Association and talked about the Party’s story, glorious tradition and fine style; and reminded the majority of Party members not to forget their original intention, to remember their mission, and to fight bravely.” It is merely the CCP’s propaganda.

Did the CCP Really Win?

In early May 2020, the Chinese and Indian forces clashed at the Sino-Indian border. Since then, the conflict has continued, the negotiations between the two sides failed. On June 15, the two sides broke out in a major conflict in the Galwan Valley. Although no automatic weapons were used, the casualties were serious on both sides. At least 20 Indian soldiers were killed. Though the Chinese authorities haven’t made an official statement about the casualties on the Chinese side, the Indian Hindi newspaper Navbharat Times on June 17 reported that 43 Chinese soldiers were killed in the incident. The CCP never revealed relevant information, and only now has it suddenly declared victory.

After the bloody clash, the two sides increased their troops, and the risk of large-scale conflicts increased significantly. After many rounds of negotiations, no consensus was reached, there were repeated conflicts and even shooting incidents.

India is more anxious to cool down and has invited Russia to mediate. Russia clearly stands on India’s side, stepping up its efforts to sell weapons to India, and has also delivered the S-400 missile defense system. The COVID-19 outbreak in India was difficult to control at that time, and India had no motivation to provoke conflict.

India is no longer what it used to be—it has strengthened its combat readiness since Mao Zedong initiated the Sino-Indian border conflict in 1962. In the cold weapon conflict, the CCP army did not take the lead, and it is very likely that it lost some mountain outposts that it had occupied. If the CCP’s army had made some gains, it would have been vigorously propagated long ago, but its current propaganda narrative is “to guard the territory.” China did not advance in the Line of Actual Control (the disputed border) but was forced to retreat. This is probably also one of the reasons why the CCP has been reluctant to withdraw its troops, and also unable to make progress.

The CCP not only failed to win tactically, but it was also a major failure in strategy. In particular, the strengthening of U.S.-Indian relations has promoted the acceleration of military alliances between the United States, Japan, India, and Australia. The CCP’s actions gave birth to the “Asian NATO.” The CCP seems to be fighting on two fronts, but in reality, its limited capacity has it falling under siege.