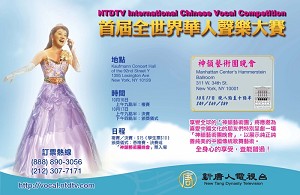 Police in Fushun City in China attempted on Monday night to arrest three individuals who had applied to take part in a vocal competition to be held in the United States. None of the three happened to be home at the time, and thus escaped arrest.

The timing of the arrest seems to have been chosen in order to prevent the three from returning to the U.S. Consulate in Shenyang City to pick up visas they had applied for. Oct. 1 is China's National Day, which is followed by a week-long holiday. Tuesday would have been the first day the Consulate would have been open for business since Oct. 1.

The three singers had planned to compete in the International Chinese Vocal Competition , which is sponsored by New Tang Dynasty Television (NTDTV). The competition is scheduled to begin on Oct. 15 in New York City.

According to Ms. Carrie Hung, a spokesperson for NTDTV, the attempted arrests “show the impact that NTDTV is having on people inside China. This competition has attracted a lot of contestants from mainland China.”

She feels the attempted arrests happened “fundamentally because the CCP [Chinese Communist Party] fears losing control of the Chinese people. NTDTV is independent and broadcasts uncensored, honest reports about China. The CCP fears how NTDTV's influence inside China is growing.” The three singers had previously been in touch with NTDTV about their visa applications. They had first gone to the U.S. Consulate in Shenyang City one month ago to apply. After each of them had shown the required 300,000 yuan (approximately US$39,000) in financial resources, the Consulate nonetheless rejected their requests upon learning they intended to take part in the NTDTV competition.

The NTDTV Vocal Competition Organizing Committee then mailed a letter to the U.S. Consulate, and the Consulate in turn contacted the three singers asking them to wait for the result.

How the Chinese police learned of the singers' intention to take part in the competition is not clear. All three had passports and so their local police would not have learned of their intentions through a passport application. However, it is common knowledge in China that many of the Chinese employees of the U.S. Embassy and Consulates are assigned their positions by the Chinese Public Security Bureau.

The renowned Chinese tenor Mr. Guan Guimin heads the vocal competition's Judges Committee. He has explained that the purpose of the competition is to promote the traditional vocal arts and to show their beauty and elegance.

The contest has a first prize of US$10,000. According to NTDTV, so far over one hundred contestants from 19 countries have applied to compete.

Ms. Hung sees in the attempted arrests on Monday a symptom of much larger problems. She asks, “How could the hosting country for the Olympics behave in this way? The CCP wants people to believe it has made improvements in human rights. But when three professional singers wish to do something as simple as take part in an international competition, then we see what rights the CCP allows them.”